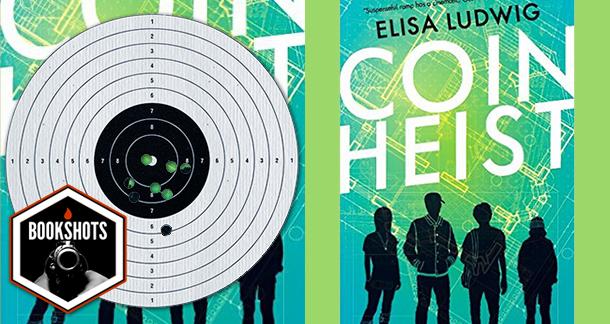 What really sells it are the characters who are nuanced and defy the kind of clique categorization of old John Hughes movies.

Elisa Ludwig, a young adult author whose previous works include the Pretty Crooked Trilogy (Pretty Sly, Pretty Crooked, Pretty Wanted) and June of Rock. She definitely likes to focus on female leads, and is concerned with the teen experience and, apparently, crime.

Four high schoolers with nothing in common find a security flaw in the U.S. Mint and decide to break into the place. Their elaborate plan is to create a limited edition run of coins to sell to collectors in order to raise money for their school. In teaming up, each with their own guiding motive, they realize they’re really not all that different. Told from four first-person perspectives, it’s also been adapted into a Netflix-exclusive movie, so don’t cheat and watch it first!

Four Thieves in Search of a Payoff

Alice – the nerd, she describes herself as an excellent student when it comes to math and science, but horrible at art. She plays Dungeons & Dragons, of course, can’t stand Dakota, and has a crush on Jason.

Jason – The class clown, his dad is the principal of their high school and gets arrested for embezzling $50 million. Jason used to date Dakota in the sixth grade. He’s a bit of a slacker, and loves to play the guitar.

Dakota – The student body vice president, Alice describes her as wearing a “nice-girl mask.” Dakota is smart, driven and tough as nails and with a bit of an ego, but she also spent the prior summer “in a fancy version of a nuthouse.”

Benny – A scholarship kid and star athlete, he describes himself as one of exactly six kids “of color” at their high school. He strives to avoid getting anything bad on his record so he can get into college. He avoids parties and tries not to let his grandmom down.

This is a weird situation, considering the book has already been adapted and the characters cast. But let’s try for an alternate version!

Alice – Chloë Grace Moretz, because she has the awkwardness and irreverent humor the character needs.

Jason – Ferdia Walsh-Peelo from Sing Street. He’s funny, charismatic and quick-witted. And it’s always fun to see Irish actors, or anyone with a funny accent, attempting an American accent.

Dakota – Elle Fanning, because she exudes intelligence but also a wounded core.

Benny – Ashton Sanders, fresh off of Moonlight. He can play tough but also sensitive, and is an amazing actor to boot.

The story takes place in Philadelphia, mostly high school and the Mint. I’ve never been to the City of Brotherly Love, although I’ve driven by it. But I do love the Rocky movies and I do love cheese steaks. Climate and culture-wise it doesn’t seem all that different from Cincinnati, my residence, so sure, why not?

I put my guitar away first, then unplugged my amp. It was a relief, actually. As I dropped the cable, it made a terrible shrieking sound, punctuating my sense of suckitude.

As young adult novels go, this is a fun read. It has four unique voices that Ludwig manages to imbue with authenticity. There are times where she suffers from Stephen King syndrome, trying too hard to use slang, but who am I to say? I’ve been out of high school for 15 years. And although I’m not the target audience for teen dramas, I do love a good crime caper.

The fun here is seeing the planning and then the meticulousness of the execution. The premise is perhaps a bit far-fetched, but the breezy tone allows for the over-the-top events. What really sells it are the characters who are nuanced and defy the kind of clique categorization of old John Hughes movies.

There’s a bit of PG-13-rated language, but nothing too harsh. All in all it’s light fun that at less than 300 pages is tight on pacing and very plot-focused. The characters are likable, but once the machinations are set into motion it’s more about the job at hand. And that makes for an exciting and engrossing read.