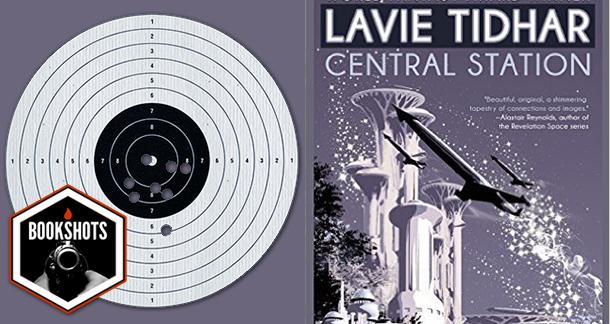 The title refers to the world’s biggest spaceport, located in Tel Aviv. The book follows the daily life of several of its inhabitants.

There are many, but the most featured one is Boris Chong, a scientist who worked in the birthing labs, creating a new generation of enhanced babies using hacked genetic code.

While the technology sounds marvelous, Central Station largely comes across as a dirty, dangerous place full of people barely scraping by. If anyone in Tel Aviv has benefited from the interstellar hub, we don’t meet them.

“They are dangerous things, doors, Ogko had once said. You never knew what you’d find on the other side of one.”

Central Station is a guided tour through a place that does not exist. Cyberpunk dystopia Tel Aviv is an interesting piece of world-building, with its myriad factions, peoples and technologies. Discarded cyborg soldiers from forgotten wars beg for spare parts and oil, data vampires drain victims of information, and Mars is inhabited by people genetically modified to resemble John Carter characters. Everyone (almost) is born with a node, which is basically a smartphone inside your head, so that they can connect to “the Conversation,” a futuristic version of the internet. The virtual and real worlds have become even more intertwined, with many people earning a living inside massive video games. Unfortunately, once the world is built, Tidhar neglects to tell any interesting stories in it. All of the most significant events of this world have already happened, and just when it seems like the characters of this book are on the brink of engaging in their own adventures, it’s over. It ends so abruptly that I actually spent a few minutes flipping back and forth to make sure I hadn’t accidentally missed something. I had not. Tidhar is also frustratingly stingy on important details—“tentacle junkies” are frequently mentioned throughout the book, but there is never anything to indicate or even hint what tentacle means in this context, or why these people are addicted to it and how that affects them. It’s just a word that keeps appearing. That’s merely one example of many. The author is also prone to a bad habit I call literary listing: sentence fragments chained together by a plethora of commas that never form a complete thought, but simply enumerate various details he couldn’t bother to put into a coherent sentence. It’s only exacerbated by the fact that none of these lists are ever significantly different from each other. By the fifth time I came across a tedious catalogue of food smells, I started just skimming. While Central Station has a great many interesting ideas set in a vividly rendered world, it lacked any appreciable narrative and is often hampered by the writer’s style. Quite creative, but not an enjoyable read.