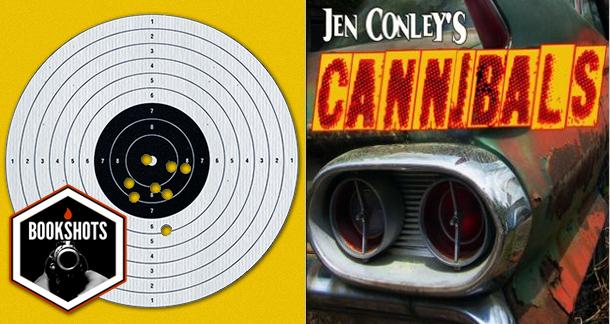 Cannibals: Stories from the Edge of the Pine Barrens

This collection of stories grew on me like a fungus...They got under my skin. They followed me everywhere.

Jen Conley, prolific short-story-artist and an editor of Shotgun Honey.

This is a short story collection, so the plots-in-boxes range from the story of a young musician, shattered physically and mentally after clashing with his girlfriend's ex, to the tale of an old woman who finally kills her husband after years of abuse. These are life stories, serious ones, mostly sad, sometimes heart-breaking.

The leads are as diverse as the stories. Andrea is an aging beat cop in her old hometown, tasked with keeping the lawless men from her school days in check, or with helping a girl find her rapist. Michael is a deadbeat, always in trouble, always chasing the next high. Debbie is a grandmother in her early 50s, trying to give her 14-year-old granddaughter a fleeting chance at a decent life.

I'm not sure of specifics, since the leads are many and diverse, but I will say this: if you were a character on Breaking Bad, you'd find a role in Cannibals.

This is my favorite question today. Cannibals is set in the lower portion of central Jersey, on the edge of the massive forestland called the Pine Barrens. This is...my home turf, more or less. Drive about 20 minutes north from where all these stories take place and you'll find my hometown. One story in particular - "Metalhead Marty in Love" - even mentions the town beside mine (Old Bridge), where I went to the doctor every time I was sick. The timeline of the stories ranges from the 80s to the present, and though I don't live there anymore....these stories were familiar! They were about (fictionalized, of course) people I grew up with. That metalhead Marty? I swear he was my brother's best friend. That beat cop, Andrea? I swear I knew her in high school. Those pine trees? Those convenience stores? They are Jen Conley's, yes, but they are also mine.

And no. I don't plan to live there again. I worked hard to escape (not that I ever actually needed to, but I thought I did). Central Jersey is no longer my home.

The words fired from his mouth without edit, without gates, like he'd accidentally hit the trigger of a machine gun and sent seven bullets into a crowd.

It took me a while to love Cannibals. I wasn't immediately convinced. After months of reading fantasy and sci-fi (my normal genres), and while simultaneously reading a friend's book that is chock full of beautiful descriptions and painfully good prose, at first I was a bit turned off by Jen Conley's bluntness. The lack of "pretty" in her writing.

But then I realized: the world she's depicting in her stories (her world, my world, Jersey world) isn't...pretty. No. It's rough and tumble, blue-collar-sad-and-broken, and her voice...perfectly reflects it. Perfectly.

Her words aren't blunt, actually. They're sharp. Edgy. Made to cut you. She writes of loneliness and heartbreak, of rage unbroken. People die in these stories, but some live, too, and sometimes life feels like the worse of the evils she could have chosen for these characters.

The stories in Cannibals hit so close to home for me they made me squirm. In "Escape," a girl named Leah (yep, she even spells it right) tries to run from an abusive ex-boyfriend named Brian. Once, a boy named Brian, an ex-boyfriend of my own (I'm not kidding), threatened me, and had he not believed me when I told him I'd call the cops if he came near me again...well, this story made me count my blessings, because there but for the grace of God went I.

This collection of stories grew on me like a fungus, but I mean that in the best possible way. They got under my skin. They followed me everywhere when I was on vacation. And that's the mark of a truly good writer. In fact...that may be one of my favorite compliments to give. I won't forget Cannibals, and I won't forget Jen Conley.

I read this review, because I liked your essay on Bad Boys. Interesting review. I have so many books to try to read I must not order any more, but you did put Jen Conley, and "Cannibals" on my radar. That is a good thing for her. Nice review. gsr