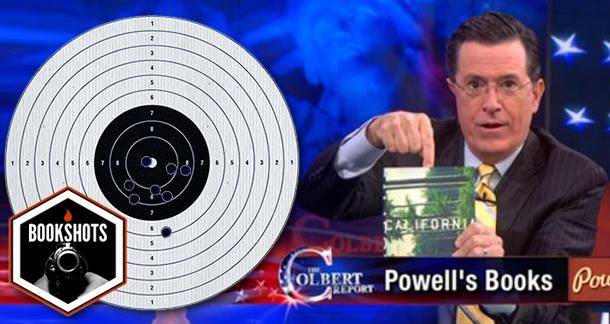 Edan Lepucki, a staff writer for The Millions. This is her debut novel.

If you're looking for the average "post-apocalyptic" yarn, look elsewhere. If you want a story about personal relationships and the consequences of the choices we make with a frighteningly plausible dystopian landscape as a backdrop, pick up 'California.'

In dystopian America, a couple flees what used to be L.A. for the wilderness, and, along the way, stumble upon weird connections to their past and make difficult decisions about their future.

The Road by Cormac McCarthy, anything by Steve Erickson.

Frida and Cal, a married couple on the lam from the world behind them.

Would I want to live in a dystopian American wilderness? Ideally, no, but I'd give it a shot.

If she was honest with herself, she could admit that Cal's gesture of protection turned her on a little. She had a passing vision of them getting naked right here, in the shadows of these terrible, stunning things. The Spikes were so breathtaking, somebody should.

In case you hadn't heard, California recently got The Colbert Bump. That's a pretty noteworthy accomplishment for a first-time novelist, even if this is more of a right-place, right-time scenario.

Yes, Lepucki's publisher, Hachette, is balls deep in a bitter dispute with Amazon, and yes, Hachette also happens to be the same group that published all four of Stephen Colbert's best-selling books, and yes, the bump makes complete sense in that case: an accessible novel in a hot genre that's not available for pre-order on Amazon, one with a megastar and viable communication outlet on its side. Bump away, right?

But, is California worth all the pre-order hullabaloo? Is it worth The Colbert Bump?

In one positively vague word: probably.

California isn't so much an apocalyptic or post-apocalyptic novel, as it is being called by nearly anyone who's read and/or reviewed it. There's no one apocalyptic level event that triggers the end of days, no small band of survivors remaining to rebuild. Instead, Lepucki constructs a future that, at the current rate we're headed, isn't far-fetched at all: climate change has reshaped the world; resources, both natural and man-made, are scarce; the rich have sequestered themselves away from the rest of us (who have either stayed behind in dilapidated cities or have gone off-the-grid into the wilderness, like Cal and Frida); and, despite all this, people are still making choices that lead to pregnancy.

That last item there is what drives the action forward, at least at first: Cal and Frida are pregnant, which, as you may assume, complicates their living situation. The whole off-the-grid thing doesn't seem so hot when a bun's in the oven, and in a society with few literal ovens left, it gets even less hot.

So, the couple seeks refuge in a community of others, one where they discover Frida's long-lost (and presumed dead) brother, Micah. This is where California begins to take shape, as Lepucki uses the community to paint a portrait of what is and has always been the most important thing we have in our lives — not the money in our wallet or the clothes on our back or the internet on our phone, but our personal relationships with each other, the trust and love we have — or don't have — for one another.

Lepucki's writing is taut but also a little bland, yet her story is compelling enough to make up for it. If you're looking for the average "post-apocalyptic" yarn, look elsewhere. If you want a story about personal relationships and the consequences of the choices we make with a frighteningly plausible dystopian landscape as a backdrop, pick up California. It's out tomorrow. You can order it from Powell's here.

Joshua Chaplinsky from New York is reading a lot more during the quarantine July 8, 2014 - 6:54am

I see you are trying to tempt me, specifically, with that Erickson comparison.

Who else would I be trying to tempt other than you?