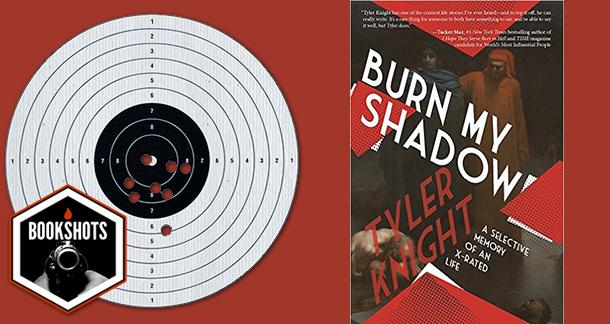 Burn My Shadow: A Selective Memory of an X-Rated Life

Make no mistake, this memoir is unlike any memoir you’ll ever read—pornographic or otherwise.

Literally anything by Asa Akira or Oriana Small—both of which wrote about their lives in the adult film industry.

Chadwick Boseman… but we all know Marvel would never let him do it.

Viagra, Valtrex, Valium…you fuck enough strangers, you’re taking a blue pill with a “V” on it.

There are two types of porno memoir. The first is where the talent regurgitates all their best stories to a tape recorder so a ghostwriter can package their exploits into readable prose. The second—and more commendable—is where the talent actually puts in the time and effort to write their own book. Burn My Shadow is a shining example of the second type. I know Tyler wrote his own book because he was on the Chuck Palahniuk forum boards back in 2010 sharing excerpts from his blog. It was way before he was seriously pursuing literary agents or a publishing deal. Even then, I knew he was on to something. We all knew it because this guy wasn’t just writing transgressive fiction a la Fight Club and Snuff and the like—he had actually experienced it. Tyler had been living in the trenches, and the realness of his exploits made the stuff I had been reading seem light by comparison. Make no mistake, this memoir is unlike any memoir you’ll ever read—pornographic or otherwise. Tyler is not the blonde bombshell starlet living a charmed life of free drugs and bottle service. He’s a black man fucking on camera just to pay the bills. He’s racially disparaged—both within and outside of the industry. Tyler shows us the dark side of porn, devoid of soft lighting and fantasy. STDs, insufficient funds, and the threat of his girlfriend ditching him for a normal guy loom at all times. Of course, the pornographic parts are the anchor of the book. Sometimes arousing. Other times, a fecal-speckled car crash of slippery genitals. As expected, Tyler nails all these scenes with an authenticity that can’t be matched. What will keep readers tuned in though is Tyler’s heart and inner-monologue as he tries to survive in an industry rigged against him. “The struggle is real,” as the kids say, and this book runs us through the physical and emotional gamut. This easily could have been just another book of banal porn tales. I commend Knight for giving us more than that and welcome him with open arms into the literary fold.

Brandon. Thank you for spending the time to talk about knowing Tyler Knight from the Writer's Workshop. That is a very important thing to mention in a review of this kind. That you would welcome him into the literary fold inand stand up for his works, speaks volumes about what you think of the writing. To know that there is an artist at work on this bears witness to the power of the work. I'm interested. Good job. gsr