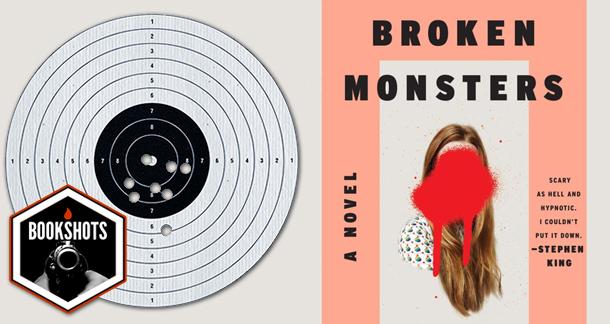 This is proper horror, with the requisite amount of killings, and this is proper crime, with clues and red herrings and scumbag journalists trying to get rich on YouTube.

Detroit cop Gaby Versado is on the hunt for a serial killer who does extremely weird and nasty things to their victims, at the same time as coping with her teen daughter’s attempts to unmask an online paedophile.

Stephen King back in the good old days.

Gaby Versado, single mom cop and all round heroine of our times.

I’ve been rewatching The Wire recently and Sonia Sohn (Kima Greggs) took on the part as I read.

The choice of Detroit as a setting is the one element of Broken Monsters which didn’t work for me, mainly because I feel no association between that city (which admittedly I have never visited) and a vibrant art scene, a key element of the plot. I therefore mentally relocated all the action to Berlin (hey it’s my reading experience – right?) where I would happily live forever.

All industries, from widget production to funeral services, are subject to the tyranny of the Next Big Thing. One moment, widgets are streamlined simple devices, then some bright spark sticks a sprocket on a widget and suddenly, in widget-land, sprockets are the new black. The publishing business is no different – if anything it is more vulnerable to trends than most – and for the last few years in book-land, one of the important sprockets du jour has been ‘the mash up’.

A mash up means taking two genres and sticking them together, often in a playful way. Pride and Prejudice and Zombies is a mash up. Move Under Ground by Nick Mamatas is a mash up. The Shining Girls was widely touted as a science-fiction/serial killer mash up, a description which, while it might have seemed like a good idea at the time, actually condemned it as a novelty – fun at first, but old within weeks.

So when Broken Monsters opens with the discovery of a corpse consisting of a torso stuck onto the hind parts of a deer, you know that Lauren Beukes is a writer with a glint in her eye. Call this novel a mash up and witlessly, you become part of the joke.

I like writers who don’t take themselves too seriously and I liked Broken Monsters for that reason, because it at no point attempted to make any points about single motherhood, or women’s issues, or industrial decline, or how the internet is turning us all into morons. The story leads the reader past all of those topics, and another writer would have succumbed to the need to lecture, to develop a Theme, but Beukes just lets her characters be who they are and lets us have fun watching them do what they have to do. She also resists that other great temptation of the crime/thriller/horror novelist, which is to let their research show. Most writers producing plot-heavy material can’t bear to miss the opportunity to give the reader a TED talk on the functioning of nuclear reactors/the deciphering of runes/the best way to swallow a cat, (or in the case of Dan Brown several TED talks), motivated perhaps by the belief that we need explanations for all the unlikely stuff that is going on. Not so with Beukes. Things happen and apart from a vague tie-in to Jung’s theories about art, the collective unconscious and dreaming, they just happen and that is that.

Which isn’t to say that Broken Monsters is light weight. This is proper horror, with the requisite amount of killings, and this is proper crime, with clues and red herrings and scumbag journalists trying to get rich on YouTube. The fact that both exist in the same novel doesn’t make it a mash up. It makes it a fresh, super-fun read.