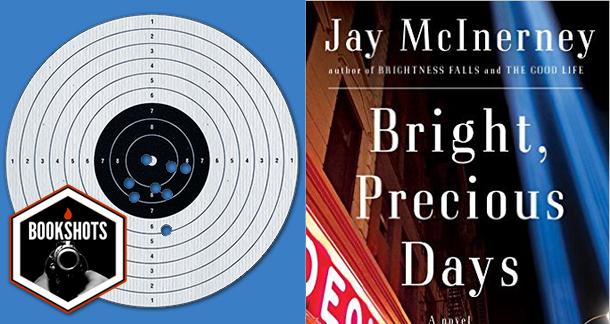 I have never read McInerney before, and actually had finished the book before I realized it was a sequel.

Jay McInerney, a novelist and wine connoisseur who will definitely let you know what his characters are ordering off the menu.

A sequel to 1993‘s Brightness Falls and 2006’s The Good Life. In 2008, Manhattan yuppies Russell and Corrine Calloway see their marriage fall apart as his company comes under fire for publishing a memoir that may be apocryphal, and she falls back into bad habits with an old lover.

Sex and the Broken City

Russell - independent publisher and overbearing editor, he contemplates cheating often but thinks it’s too much trouble. He loves his pre-teen twins, Jeremy and Storey, but still manages to get their beloved ferret killed during a dinner party.

Corrine - devotes herself to feeding the poor, wouldn’t mind moving to Harlem, and hates her sister but still asked her to donate eggs to help conceive the twins. Corrine never realized cocaine made sex so good until she tried both with Russell’s best friend Jeff. But hey, it was the ‘80s.

Both have a tendency to let their underage children watch inappropriate Judd Apatow movies.

Russell - William H. Macy, because he has character without being traditionally attractive, exudes intelligence and yet always looks like he’s on the verge of a heart attack.

Corrine - Julianne Moore, because she can play both maternal empathy and selfish indulgence, and definitely looks like she’s accustomed to sleeping in California King beds.

TriBeCa in lower Manhattan circa 2001 to 2008, and not by a long shot. The subway is confusing, the bohemians are insufferable, and I would have spent every day dreading the next terrorist attack.

While it would be an exaggeration to say that Jeremy and Mingus were close friends, they were brothers in arms when playing Halo 3, trading roles between the Master Chief and the Arbiter, nuances of personality disappearing in the pursuit of their roles within this alternate universe.

I have never read McInerney before, and actually had finished the book before I realized it was a sequel. That being said, I never felt lost and appreciate how lived-in this world feels. These are characters with history, and perhaps what benefits that precept is how the novel is written almost like a work of non-fiction.

Chapters are written with a particular focus on certain characters, usually switching back and forth between Russell and Corrine but butting in to others’ lives at times, and there’s not much in the way of introspection. A major event will happen, seemingly ending a chapter on a cliffhanger, only for the next page to reveal weeks if not months have passed. Information is often communicated through an omniscient third-person narration that regales the reader with the intricacies of city life and interpersonal associations, but doesn’t delve into their minds too often.

Characters express themselves through dialogue, and that plays into an overarching theme of communication, or lack thereof, throughout the book. It’s very frustrating that most of these characters suffer from avoiding their problems and simple negligence. That plays into another theme of the book, the inability to escape the past. That’s true of Russell and Corrine failing to tell their children about their real parentage, it’s true of Corrine and her affairs with Jeff and Luke, and it’s very true of Russell’s inability to vet Kohout’s book properly.

But also built into the DNA of this work is its explicit concerns being first-world problems. If you can accept that this upper-class, bourgeoisie couple is suffering real emotional turmoil during their many fly-fishing trips, flights on private planes and bouts of oral sex in bathrooms, then you’ll be fine. And it’s unfair to not engage with art on its own terms. McInerney crafts a glimpse into their lives with an air of authenticity and finds a universal truth there.

That universal truth is, of course, that this country never quite recovered from the deep cut that was 9/11, and McInerney manages to navigate the scar with a bit of poetry. He knows his characters are broken, but he kind of loves them for that even while the book borders on satire. There’s always empathy, for the Calloways and especially for New York City, and that alone justifies the book's existence.