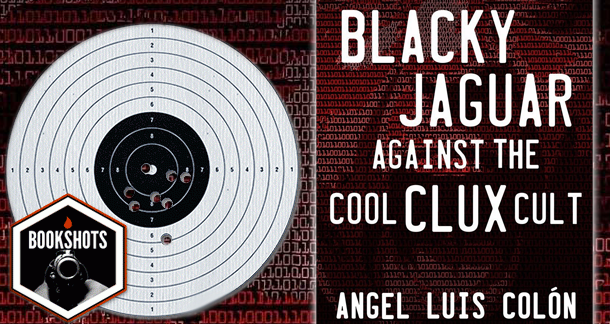 Angel Luis Colón, winner of the inaugural AJ Hayes Writing Contest for ‘Shotgun Wedding’ and Derringer and Anthony Award nominee for No Happy Endings and the Blacky Jaguar series of novellas. His writing appears in numerous print and online sites and he has a short story anthology, Meat City on Fire (And Other Assorted Debacles) coming out soon.

Blacky Jaguar is on the run and headed for Graceland, but that doesn’t stop him from getting involved with an old friend with a “situation” in a small Tennessee town. Of course, mayhem and violence follow.

Blacky’s got all kinds of law after him, mainly because he keeps pissing off the wrong people.

I would call it: Blacky Beats the Shit Out of a Load of People.

Most things by Dennis Lehane or Chuck Palahniuk.

His pompadour a thing of the past, Blacky Jaguar is much the same: a career criminal with an Irish accent and a reputation for trouble following him from Ireland to the Bronx and now to a small town in rural Tennessee. His “dealings” in the Bronx after his beloved '59 Plymouth Fury was stolen have made him a hot target for law enforcement and have put a price on his head that’s not making it easy for him to ride off into the sunset.

I can still see Matthew McConaughey in the role, but someone like a younger Brendan Gleeson might be a better fit.

Rural Tennessee? I don’t think so.

”Hold up, you’re that crazy motherfucker that drove a truck over the midget in New York?”

Blacky choked on his beer. Coughed for a few seconds. “Fucking hell, is that how they’re telling it?”

Talk about a rollercoaster ride! I’m a fan of Blacky who is, by all accounts, pretty unlovable, having a particularly violent streak when he puts his mind to it. The further adventures of Blacky Jaguar don’t disappoint, either. Blacky’s got all kinds of law after him, mainly because he keeps pissing off the wrong people. That said, he seems remarkably free to go just about wherever he wants to.

Following a call from his old nemesis Broderick Kimbo, a disgraced former FBI agent who once saved his life, Blacky ends up in Nillings, Tennessee. Kimbo wants his help dealing with someone that keeps causing problems for innocent, non-white people: whoever he is, he’s set up an extreme alt-right group called the “Cool Clux Cult” to attack anyone he remotely suspects of being a social justice warrior. This shadowy figure is known online only as “neilDATASStyson.” Kimbo’s currently protecting a young black woman who was severely beaten by the police (without justification) and trying to change the way things work in his adopted town. With the help of Blacky’s old hacker friend Tony, Blacky starts hunting racists, with the resulting chaos I’ve come to expect.

I’m beginning to really like Blacky, even with his sociopathic, violent tendencies. Somehow Colón gets us to totally sympathise with him and sucks us into Blacky’s world, however dark it may be. I’m looking forward to seeing more from Blacky and hope we don’t have to wait too long for a new story about him!

Bookshots: ‘The Fury of Blacky Jaguar’ by Angel Luis Colon