Bookshots: "Black Wings Has My Angel" by Elliot Chaze 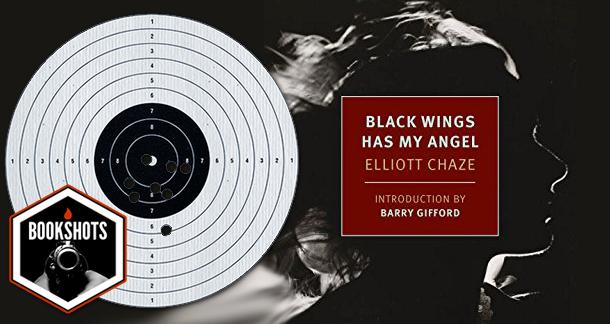 Black Wings Has My Angel

Black Wings Has My Angel  has been hailed by critics before me as “the perfect crime novel,” and I have to agree with them. It literally has everything on the noir checklist.

Elliot Chaze (1915-1990), was a journalist who wrote ten novels, mostly crime noir. Black Wings Has My Angel is unquestionably his masterpiece, but it has been out of print in America for a long time.

“Tim Sunblade” has just escaped from prison and is eager to perpetrate his next get-rich-quick scheme: stealing an armored car. In Mississippi he enters into a love-hate relationship with a call girl who has incredible skill behind the wheel and decides she’s the perfect partner for his heist.

In reprints, it was titled One for the Money, which I think fits the story better despite not sounding nearly as cool.

“Tim Sunblade” (an alias) is a poor boy from Mississippi who went to college, got drafted into war, and returned home with a piece of shrapnel in his head and a strong desire to steal cars, which got him locked up in Parchman. After his escape from prison, he’s got one last big score to pull off so he can spend the rest of his life on easy street.

Virginia is a steel-hearted dame with legs to die for and a mysterious past who could teach a master class on femme fatalism. You’re never sure if she’s on Tim’s side, or just waiting for the right moment to cross him.

Well, a movie was slated to start shooting in 2012 with Tim Hiddleston and Anna Paquin playing the leads, but was delayed by the birth of Paquin’s twins. Replace Hiddleston with Josh Holloway (best known as Sawyer on Lost) and I’d be happy.

Tim and Virginia do a great deal of traveling, from Mississippi to Colorado to New Orleans. Thanks to Tim’s excellent narration, even the ugliest dive achieves a strange tint of beauty, although I certainly wouldn’t want either of them for my traveling companions.

There are so many, it was a chore to narrow it down to just two:

There was the damnedest sunset, smeared like sirup of opals over everything and dripping off the clouds the way the molten metal comes out of the ladle in a steel mill.

They’ve taught you that to think is to be smart but my friend there’s times when it’s smart to be stupid.

Black Wings Has My Angel has been hailed by critics before me as “the perfect crime novel,” and I have to agree with them. It literally has everything on the noir checklist. A tough guy too smart for his own good. A devious dame to kill (or die) for that’s on nobody’s side but her own. A perfect heist, a road-trip, a prison escape. Dumb luck and rotten coincidences. Dirty small town cops, working-class crooks, and socialites that are equal parts wealthy and bored. There’s a grisly murder of an innocent man, a shoot-out with the cops, thrilling chases, and plenty of clever aphorisms about the ways life screws us all. It would be so easy for this story to descend into cliche, but it never does, and we have Tim Sunblade to thank for it. An adept narrator who strikes just the right balance between vernacular and literary, Tim even makes the long passages describing scenes from nature (which I typically loathe) a compelling read. I never even felt the temptation to skim. Black Wings Has My Angel is an unequivocal classic, capable of teaching generations of writers to come how to pen a perfect noir tale.

Hey look what I found.

That may have come out wrong.