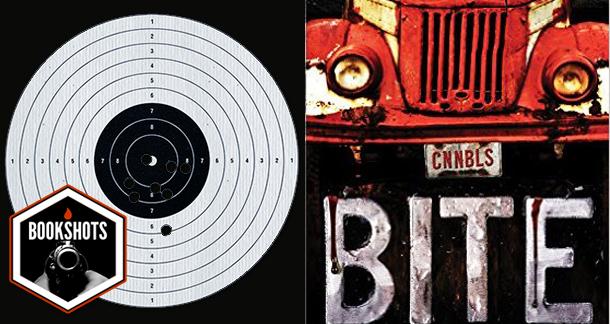 A young girl runs away from home in the middle of a post-apocalyptic wasteland. She is taken in by a crew of “sharks” (cannibal raiders) who teach her to survive in a harsh world whilst hunted by the various factions that inhabit it.

Kid, a young girl born in a bomb shelter after the nukes fell. Although she begins the book dangerously naive, she is quite clever, has a powerful will to live, and learns very fast. She is unsettled by the more extreme behavior of her cannibal comrades, but reserves judgement and realizes that they are her best chance at surviving the wastelands.

Oleysa Rulin, who is currently playing Retro Girl on Powers.

A desolate radioactive wasteland populated almost entirely by paranoid townsfolk, heavily-armed sociopaths and would-be dictators. The kind of place where you can meet a gang of a cannibals and think “These guys are all right.” I wouldn’t even want to visit.

There’s nothing but empty desert and the ruins of old cities in every direction. Nuclear war can do that to a place, I guess.

Bite is an impressive and fun debut novel, an interesting twist on the traditional “babe in the woods” tale. Kid begins the story as a wide-eyed innocent, who seems to have survived on luck alone thus far. But instead of resisting the depredations of the wasteland to remain true and pure, she joins a band of cannibals who teach her to be the thing people run from rather than the person running. Wolf and Dolly would be just another pair of faceless villains in the typical post-apocalyptic fable, but through Kid’s eyes, uncolored by pre-war notions of morality, we get to see them as complex characters, who actually have real motivations and sympathetic backstories. Although they have done terrible things, they are the only people who don’t immediately try to kill, rape or exploit Kid upon meeting her. The wasteland is a nasty place full of ruthless people, but Kid comes to learn that none of them are monsters by choice. When a would-be ruler of the rubble puts a bounty on their heads, Wolf and Dolly teach Kid survival skills by handing her a knife and throwing her into the deep-end. They can’t seem to go anywhere without kicking off a Miller-esque action set piece that destroys what little was left standing. Bite is certainly never boring, moments of metaphysical contemplation and morbid humor punctuating explosions of insane violence and slapstick carnage.