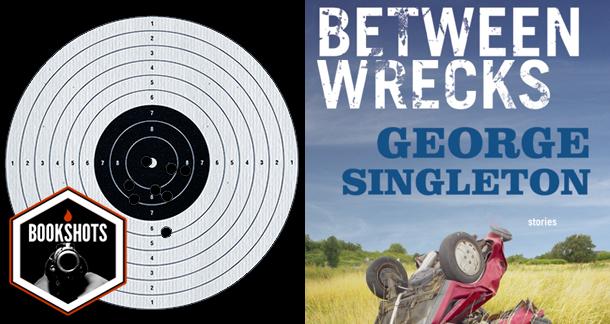 The slice of life storytelling made me feel like I was a fly on the wall, selfishly witnessing the characters going about the business of their everyday lives.

Every story is different, but they all capture the various flavors of people living and existing in the South. All glamor is checked at the door.

Stet Looper is the character that appears the most in this collection. He is pursuing a low residency masters degree in southern culture studies, has taken over his father’s rock business, and is dealing with the fact that his wife has left him.

The stories take place in the South, primarily South Carolina. While I’ve enjoyed driving through and exploring the South, I don’t think I would hang my hat there.

I could never find a place to flat-out hide.

Between Wrecks is an accurate title for this collection. The slice of life storytelling made me feel like I was a fly on the wall, selfishly witnessing the characters going about the business of their everyday lives. Failure seems to be infused into every story, broken marriages specifically. In 'No Shade Ever' a junkyard owner discovers his wife is having an affair after her wedding ring is stolen during a house break-in. In 'Traditional Development' a man brings a camera with him everywhere he goes to show his wife he is capable of interacting with others normally. In the harrowing story 'Vulture' a wife attempts to manifest a reason to end her marriage. When it fails, she leaves anyway.

At times, Singleton’s subtle storytelling left something to be desired. There were times that this collection lost me. The stories don't often lead to any climax, and they certainly don’t end with a bang. However, Singleton knows how to use language, repetition, and humor to his advantage, and these things kept me reading. The collection peaks at the title story, 'Between Wrecks', which takes places at Laurinda’s, a diner located in the middle of two car wrecks on different sections of the highway. I felt that the author was most connected to this story. The cast of characters stuck in the diner with Stet Looper and Stan 'Stain' Renfrew are colorful and odd, but real. Most importantly, though, was how much I wanted to to eavesdrop on the conversation between Stet and Stan for as long as possible.

Stet Looper stood out as the collection’s protagonist. He is extremely well read, but seems to lack a necessary level of common sense and understanding. I questioned his sanity completely in the final story, 'I Would Be Remiss,' an 80-page acknowledgement letter that accompanies the final project that comes out of his southern culture studies program.

It is worth mentioning that nearly all the characters in Between Wrecks turn to the bottle. Drinking is embedded into the world of this collection in such a way that I accepted it as the norm very quickly, whether the characters were at a bar, restaurant, or at home. When I step back and look at the stories as a whole, I see a slew of lost, unhappy, and confused people. However, I suppose this could be said of anyone, anywhere. By the end of Between Wrecks, I was heartbroken by Stet’s attempts to be okay and to find his version of 'success'. I identified with this collection. I’m sure you will, too.

Great review, Christine!  Sounds like the kind of book that I might enjoy moderately while reading, but not something I'd necessarily choose to read.  Stephen King once said something along the lines of "it doesn't matter how beautiful your car is if it's up on blocks in your garage and it doesn't work and it can't drive you anywhere."  I love poetic language, and beautiful though often fucked-up personal observation stories or stories about relationships.  But those can be hit and miss, because for them to really connect with me they need to be incredibly well-written and often need to either share a similar mental space with me or introduce me to a way of thinking I find fascinating.  A good plot, however, can circumvent some of that just by telling its compelling narrative and keeping the pages turning.

I'm most curious about how you discovered this book, or this author in general.  It's certainly not something I've seen on any bestseller lists or book-of-the-month club selections, and seems pretty far from the beaten path (always a good thing).  Did your love of McClanahan and Shepard lead you to him, and if so, how?

I thank LitReactor for introducing me to this book! I think Between Wrecks relies most on readers connecting with the characters, rather than the situations. This subtle style of writing seems to be very popular nowadays. I think I like it.