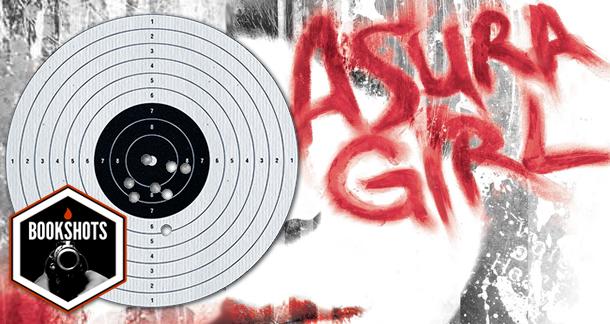 ...the funniest parts of the whole book are reading Aiko's vague, half-assed analyses of movies she doesn't remember all that well.

Tokyo is being terrorized by a serial killer called the Round and Round Devil, who likes to skin and section small children. Youth gangs, each accusing the others of harboring the Devil, are beating each other up in the streets. This has led to wanton widespread violence all over the city, egged on by an internet message board called the Voice from Heaven. None of that really matters to young schoolgirl Aiko, who just wants to get laid. Preferably with her unrequited childhood crush, Yoji Kaneda, if he would just stop caring about other people's problems for a moment. High school is the worst.

It's Not About You

A Clockwork Orange by Anthony Burgess, or Almost Transparent Blue by Ryu Murakami.

Aiko, a seventeen-year-old sociopath who just wants to fight and fuck, and can't understand people who waste their time on anything else, until a headfirst encounter with a hammer causes a shift in her perspective.

You shouldn't go stealing other people's gods. But then isn't all religion a matter of stealing in the first-place?

Asura Girl is half of a really good story. The early parts about Aiko's life of empty hedonistic indulgence in casual sex and brutal, anime-grade violence are insightful and provocative. Despite the hyperbolic elements of the story, her view of the world feels like a very accurate depiction of how solipsistic the teenage mind can be. While it's amusing to hear her obsessing over a teenage crush while her world literally goes to hell, the funniest parts of the whole book are reading Aiko's vague, half-assed analyses of movies she doesn't remember all that well.

The problem is the part of the book I haven't even mentioned yet, because I have no idea what to make of it. A hefty chunk of the story takes place in what is basically an extended dream sequence that makes no narrative sense. It seems intentional, but to what end I can't fathom. Stuff gets really surreal, which is perfectly fine, but it stays so abstract for so long that you lose sight of how any of this kaleidoscopic imagery is important to the story you were reading before. And these aren't brief divergences from the main storyline: halfway through, the book goes to dreamland, and it doesn't come back until the last twenty pages. Perhaps there's some symbolism that simply didn't make the translation, because it's this dream that leads to the major character turning point for Aiko. But have you ever listened to someone tell you about their dream? No matter how meaningful it was to them, all you end up hearing is nonsense. While I was very interested in Aiko's story, the second half of the novel didn't seem to be about that.