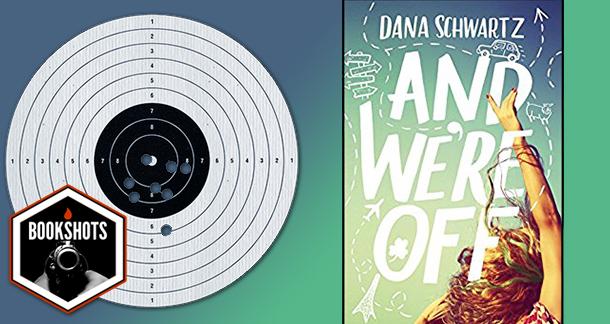 Going after your dreams and dealing with your mother can feel more psychologically grueling than any Hunger Game/Battle Royale.

Dana Schwartz. She is a humorist and columnist for the Observer. She also curbs my disenchantment about writing professionally with the hilarious Twitter account @GuyInYourMFA and writes my favorite Bachelor/Bachelorette pieces/recaps. MSNBC asks her opinion on culture and politics. And We’re Off is her first novel.

Nora gets accepted into the Donegal Colony for Young Artists. Though Nora draws erotic slash art for money (Hey Razorbill, please put some drawings in the paperback edition), unfortunately it is not enough to pay for the trip and school. Instead of taking out her Bat Mitzvah savings, Nora’s grandpa and fellow artist agrees to pay for the trip as long as she creates an original piece of work at each stop. Sign me up! The only problem is Nora’s mother decides to tag along for the trip, (Growing up with a Jewish mother, this is more scary to me than all of Lovecraft’s stories combined.)

Was Picasso’s Mom A Pain in the Ass Too?

Robert Parker—the cool Grandpa who is an artist too

I just finished a Riverdale binge so I’m going to use their actors:

Robert Parker—Luke Perry (We give him old people make up Gen Xers, relax, you are not that old)

Chicago, Paris, Brussels, Donegal, Florence, Italy, and London. I would live in every place except Chicago (sorry, Jason Diamond).

Is it possible for STIs to go airborne?

My fiancé and I have the most annoying and crazy Jewish mothers that ever existed. The idea of having to travel with our mothers to Europe would be our worst nightmare. It actually triggers me, and that is why I loved this book so much. Schwartz uses humor and great character development to make this story work. It shows that high stakes in YA don't always have to be dystopian or involve dying, that going after your dreams and dealing with your mother can feel more psychologically grueling than any Hunger Game/Battle Royale. The novel hits a lot the genre expectations of great YA novels, but also adds something poignant to say about family relationships. It has one of the most satisfying endings I’ve read this year.

T.D. Brooking from California is reading Black Wings has my Angel by Elliott Chaze June 7, 2017 - 3:59pm

Sounds like an enjoyable summer read (while on a road trip?)  Refreshing to know this story is lacking in bloodshed and dismemberment.

It was a lot of fun and a lot of heart. I read Bizarro, non-ficiton, horror, literary ficiton, and YA and this is one of my favorite YA novels I've read this year. The Hate U Give was excellent too T.D.