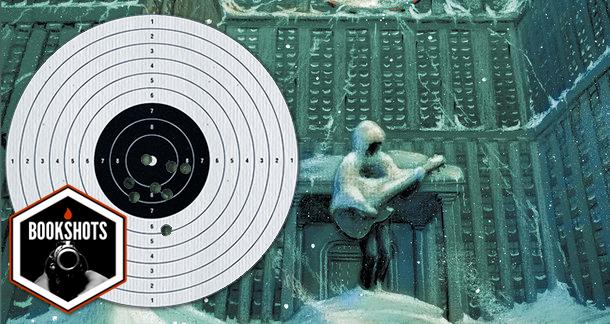 If you think you'd dig watching a psychedelia-infused version of 'The Thing' while blasting awesome tunes and having a great acid trip, then you need to pick this one up.

Tony McMillen, artist, columnist, and author of Nefarious Twitt and Angel. McMillen has also done covert artwork for a variety of novels, including this one.

A veteran heavy metal rocker gets trapped with a few other people in a hotel where monsters roam the hallways and the greatest secret in the history of music is trying to kill them all.

The Devil's Chord (which is too easy) or Monster Melodies.

Nonfiction about the history of rock and roll, humorous novels, John Carpenter's The Thing, fresh takes on cosmic horror, and the work of Victor LaValle and John Langan.

Codger Burton - bassist and lyricist for Frivolous Black, the darkest, heaviest heavy metal band to ever come out of the UK.

Rikki Spectre - punk lead singer of Rikki and the Spectres.

John - youngster who took a job at the Hotel Alucinari to meet rockstars.

Marcus Wilkes - bodyguard to many rockstars and a man who knows what the governmnet is hiding in reagrds to music.

A haunted hotel full of mayhem and monsters? Sign me up. There's a lot of slashing, and I've always like slashing more than guns, so that's a bonus.

In horror, you can show the monster and let readers imagine it. McMillen always shows, but he pulls it off brilliantly and every passage describing a new encounter/transformation/vision is great. Here's one early example I loved:

His back was riddled with small orifices like fresh incisions and from those openings light shone. The flesh making up the blanket of skin around them had changed as well, turning his back into some sort of glass honeycomb, like a sea sponge with a brilliant wet light coursing through its pocks and pinholes. A screaming meteor that was only fluent in pissed off rainbow.

This is a wildly entertaining novel that is both a hilarious deconstruction and a tender love letter to rock and roll. McMillen has a knack for dialogue and that helps the action and the story move forward at breackneck speed. In the first third of the book, he manages to present his main characters, give their back stories, deconstruct rock and roll as a business, talk about what life on the road is like, place readers in the hotel, and take the first manic steps in the crazy downward spiral of dangerous monsters that is An Augmented Fourth. This novel is hard to describe because it packs a lot, but I think I figured out a way to recommend it in a single line: If you think you'd dig watching a psychedelia-infused version of The Thing while blasting awesome tunes and having a great acid trip, then you need to pick this one up. As a musician, music lover, and music writer, there were enough names, stories, and crazy theories here to keep me turning the pages and ignoring everything else that needed to get done. It will do the same for those who are not as passionate about music because the characters are engaging, the banter between them is funny, and the creatures are all different and unique. Word Horde is one of my favorite indie presses because they never publish two books that resemble each other, and An Augmented Fourth fits in perfectly in their impressive catalog because it is at once familiar and entirely fresh.

Bookshots: 'Beneath' by Kristi DeMeester