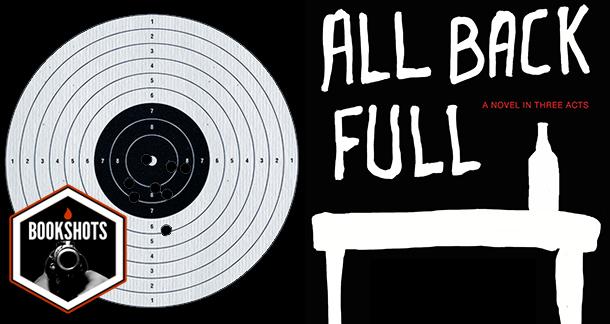 'All Back Full' walks the line between a play and a novel, and it does so brilliantly.

Robert Lopez is the author of two previous novels, Part of the World and Kamby Bolongo Mean River, and two story collections, Asunder and Good People. He teaches at The New School, Pratt Institute, Columbia University, and the Solstice MFA Program of Pine Manor College.

A man, a woman, and a friend sit at a kitchen table and discuss nothing and everything.

The man, who is an average American male. He isn't very effective around the house and remembers a woman from his past quite often.

The woman. She is an average American female who loves dogs and sometimes has a hard time following her husband's disjointed way of thinking.

The friend, who is also average. He has a wife at home and spends a lot of time looking out his abode's windows.

The entire narrative takes place in a kitchen inside a house in a nondescript town where people more or less care about the name of their house, so no. I think I would probably die of boredom surrounded by these people.

He says, There are too many people here, everywhere you go people, people with other people, people with older people, people making newer people, be it the bus depot on the public parkways or the city streets or even in your own kitchen, fighting your way through zombies and mummies to boil a pot of water, dropping some converted rice in there so you can have something to eat, so you can stay alive another day, but none stand a post anymore and check passes, check identifications and credentials, ask questions, conduct surveys, zombies in mummies today go through the very slow motions and this is a problem because I'm talking about who is left to keep on top of things, how all of us should get up in the morning and go to work, how it is we should behave, who it is and how it is we should talk.

You know those situations where someone is explaining something that is hilarious to them but they're forced to end with "You had to be there"? Well, this is one of those books. None of what I said up there does it justice. All Back Full walks the line between a play and a novel, and it does so brilliantly. In fact, the book is explained as a "novel in three acts," and that's exactly what it is. This is a novel about the day-to-day grind, about the way marriage slowly corrodes, and about the strangeness of friendships that come and go.

However, and this is what pushes this novel into must-read territory, Lopez is a master of both language and delivery, so the conversations, mundane and packed with non sequiturs, are interrupted by discussions and explanations of a wide array of things. These explanations cover themes such as the sexual conduct of dolphins, hurricanes, Aristophanes' plays, fibromyalgia, the origins of trade unions, submarines, the story of the first pedestrian victim of an automobile collision, and aphasia, to name a few. Lopez smoothly weaves encyclopedic knowledge of a plethora of things into conversations your none-too-bright neighbors are probably having while you read this. The dialogue and space on the page makes this a fast read, but it is nonetheless very satisfying. There is nothing special going on in this narrative in terms of plot, but that changes when you suddenly discover that everything about it is special because it manages to encapsulate the past and present of a couple while also showing the things that keep them, and everyone like them, going and the small things that announce their end. Lopez is an entertaining author with a knack for dialogue and a superb eye for detail who is not afraid to play and experiment with storytelling. This book proves that he pulls it off while making it look easy.