Bookshots: 'After James' By Michael Helm 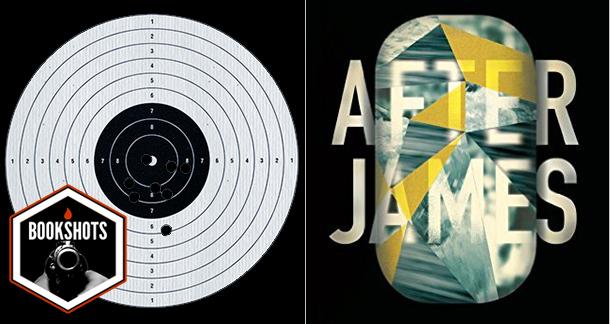 A weird, fantastical read which combines elements of science fiction, mystery, and horror and creates a wholly original and expertly crafted novel.

Ali is a neuroscientist who flees her job developing the next Molly or LSD and retreats deep into the back country of Canada with a sample of the drug and then promptly disappears during a violent storm. The rest of the novel focuses on the ripples of her disappearance through the eyes of professional reader, James, who’s hired by Ali’s father to study the postings of an anonymous online poet who writes in detail about several murders, and Ali’s emotionally broken sister, Cecilia, who's dealing with a recent miscarriage.

Pretty much anything by David Mitchell

Cecilia: Ali’s despondent sister. Or is she? Who knows because her life has been stolen by a high concept performance artist. Yeah, Cecilia’s luck is just as shitty as Ali’s.

You know this already: Ruth Buzzy (in a dual performance) and Benny Hill.

The novel takes place in a wide swath of locations including rural Canada and Rome. So yes to some, no to others.

The night the dog’s body burned along with that of the human he’d found, and then burned again until its ashes were general with all else on the wind. They lifted on the heat and floated out under the stars and over the country thawed and returning with a force beyond that of any since people first appeared.

I live and breathe for multiple tier stories. You know what kind of stories I’m talking about, right? Tales that span multiple characters and continents, weaving a tapestry, creating connections where there seemingly shouldn’t be any. It’s a tough trick to pull off and there are only a handful of writers who can typically do it well: David Mitchell, the late Roberto Balano, and Kate Atkinson immediately come to mind. Writing this kind of story, in my opinion, is the equivalent of literary powerlifting. It takes time for a storyteller to get to the point where this kind of complex narrative is second nature. Where they shrug it off the mat and hoist it over their head with barely a grunt. And then there are those writers who want to pull that kind of weight and fall flat on their faces, or snap an ankle once the weight is in the air.

For a select few, they’re just naturals when it comes to the style.

Needless to say, Michael Helm’s second novel from Tin House, After James, is a complex narrative that intertwines the strange world we live in and makes it even more alien. We recognize it as our own, we see it and accept it, yet there’s something utterly bizarre about what we’re experiencing. The world Helm has crafted is dense, poetic, and pitch black. He has an exquisite eye for detail, which both equally drives and hinders the progress of the novel. Helm’s prose is beautifully constructed, rendering even the most violent of scenes into a delicate poetry. But as I mentioned, Helm’s detail oriented style brings the narrative to halt on a few occasions, although he does manage to reign in the slack and move the story forward.

Despite this small imperfection, After James is a weird, fantastical read which combines elements of science fiction, mystery, and horror and creates a wholly original and expertly crafted novel and easily one of my favorite reads of 2016.