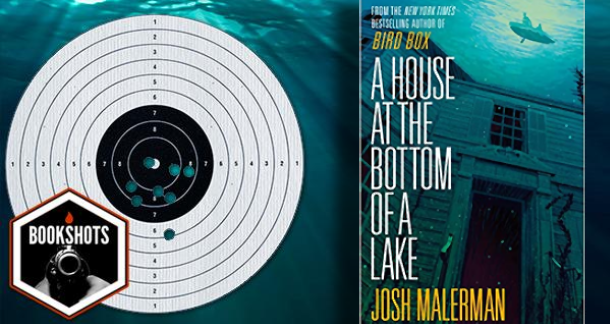 A House at the Bottom of a Lake

Malerman expertly conjures a fairy tale nostalgia of first love, and we follow along, all too willingly, ignoring the warning signs even as the fear takes hold.

A saccharine meet cute leads to summer romance and discovery of the titular house.

I came up with a bunch, but none as effectively eerie as the original:

Home is Where the Heart Is, Playing House, Underwater Love, Why Must I Be A Teenager In Love?

Bird Box, Neil Gaiman, Stephen Graham Jones, the novellas of This Is Horror.

Amelia and James. Both seventeen. Both afraid. But both saying yes.

I think it would be really interesting if they cast Jaden and Willow Smith as the young lovers.*

[*They were age-appropriate when I first wrote this review.]

A house at the bottom of a lake. Only if it had central heating.

Is this his future? She might think. A girl said that to him once. Asked if this was his future. James didn't want Amelia asking that.

Ya'll might remember a tense little book by the name of Bird Box that took the horror community by storm back in 2014. It announced to the world a prodigious new talent, one we all put on our "Let's see what this guy does next" list.

Well, next was the novella A House at the Bottom of a Lake, originally published by This is Horror. It concerns two teenagers who discover a special place and retreat from the world, only to learn that nothing stays special forever. This Del Rey reissue brings the fan favorite to a wider audience of Malerman fans. Or should I call them Malermaniacs? If that term has yet to be coined, I coin it.

Malerman expertly conjures a fairy tale nostalgia of first love, and we follow along, all too willingly, ignoring the warning signs even as the fear takes hold. This is the type of story that reminds us old-timers of what those days were like, how exciting and scary they were. Back when summers were long and we didn't have to think that far into the future. It is a bittersweet journey, full of sincerity and truth. One I highly recommend taking.

Your verdict gave me a chill. Not gonna order it, but you did place it on my radar. And is it deductive of Gaiman's,  is it . ..The Lake at the End of the Street?   Is it? Is it?  I did not make my way very far into that book.  Even gave it away. Rebought it. I'll try again.

Caden and his sister.....you are just checking to see if anyone is reading.

Maybe I'll try Gaiman again. Don't get that guy. Sorry. I admit. I keep trying. It must be over my reading grade level. I felt the same way about Neil Stephensen, "CRYPTO...." whatever.  something like that...just too smart for me.

Oh yeah! Nice column, by the way. "A saccharine meets cute"  have no idea in the world what that means, I guess I'll have to build that world myself.

Oh, I love Malerman as well as Gaiman :) Their works are very appealing to thinking people. It’s not only thought-provoking, it draws you in from the beginning. They are really well-written. I'm also a novelist but haven't published any book yet. It's hard for me to find a proper job like them... I heard about cv services online like here... Do you think it will help??