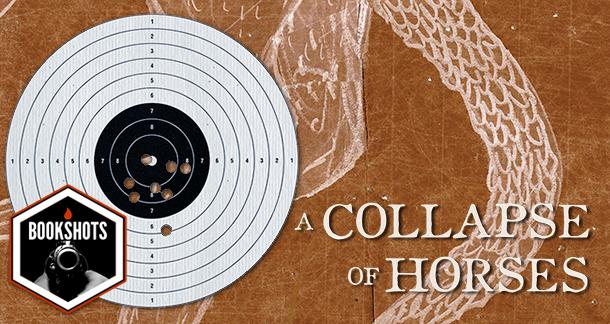 Since finishing 'Horses,' I have read three more [Evenson books] in succession. That right there is a review in and of itself.

There is no box big enough to contain these seventeen stories. From sci-fi to horror to Western to relationship drama, they are nightmares, all.

Person, Please Out of Cave, a truly creepy line from "Any Corpse," my favorite story of the collection.

Read This if You Like(d):

Evenson's leads tend to be tabula rasae, blank slates on which we project to fully immerse ourselves in fear. Faceless men compelled by the unknown, who don't know when to turn back, or care enough about their own self-preservation to try. We, as the reader, are powerless to stop them.

In light of what I said about the book's leads, sign me up, coach. But any unfamiliar character actors would do.

Again, from the chilling "Any Corpse":

"Body made of meat," the furnisher said. "So too meat made of body. Let it be written and beads exchanged."

A Collapse of Horses is the first of Evenson's books I have read. Since finishing it, I have read three more, in succession. That right there is a review in and of itself.

He was one of those authors, like Steve Erickson, that I had heard so much about, and knew I would love once I got around to reading. Usually that kind of anticipation results in disaster, or at least indifference. In this case, a new writer has been inducted into my pantheon of favorites.

Coffee House Press did an ingenious thing with the ARCs of Horses. They included excerpts of the three Evenson novels they are reissuing. After finishing Horses, I read the excerpt of Father of Lies, and immediately had to purchase the whole book. Same with Last Days. By that point, I was hooked, and purchased The Open Curtain as well. So you might as well consider this a glowing review for all four books.

Coffee House Press, by the way, is a non-profit indie dedicated to publishing works that don't fit neatly into any genre's box. As their motto says: Literature is not the same thing as publishing. Their hearts are in the right place, and they deserve our support. Check 'em out.

Awesome. Dammit, now I have to buy this.