Bookshots: 'A Bloom of Bones' by Allen Morris Jones

Review by Stephanie Bonjack November 1, 2016
In: 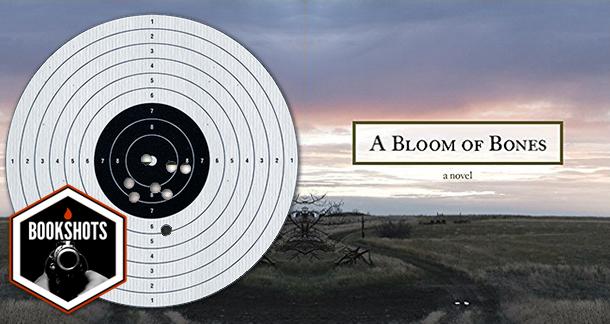 A Bloom of Bones

Allen Morris Jones, a prolific writer of short stories and essays and the author of Last Year’s River. He also is the editor of Big Sky Journal.

Plox in a Box:

Poetry within narrative text is just as bad as trying to describe classical music if the writer isn't a music critic.

A dead body renews old conflicts in a small rural town and complicates a budding romance.

Stories with the word "ain't."

Eli Singer is a lonely poet cowboy in eastern Montana. Chloe Barnes is his literary agent who finds herself quickly in over her head after she decides to visit his ranch.

Jordan, Montana, a rural town where nothing happens and everyone knows everyone's business. A great place to be miserable.

My old stepdad used to say Pete would rather climb a tree and tell a lie than stand on the ground and tell the truth.

Too many devices piled into one narrative makes it hard to enjoy, or care about, the outcome. Allen chops up his story, so we bounce around in time a lot. The novel opens with the reveal, a decision I question. He then backtracks to try to bring us to a point where we care about these characters, but I don't think he succeeds. Over and over again, I found myself thinking, "More backstory, really?" Everyone's poor and sad. It's not as if there are no sympathetic characters, but the reader has to wait a long time to get to them. Eli's sister is well-drawn and her scenes are especially welcome.

There is poetry. I'm sure some readers would find it amiss if the cowboy poet's poetry wasn't included in the narrative, but I like a separation of church and state. Eli is regarded by his publisher as magnificent, which means the poems have to be the same, an impossibility, given the subjective nature of poetry. To me, poetry within narrative text is just as bad as trying to describe classical music if the writer isn't a music critic. It always sounds corny.

And finally, there's Chloe Barnes. She thinks like a beat cop and lives like Bridget Jones. This tired trope in which a woman who makes a living in the literary industry covers every surface of her home with coffee rings and wine stains has to go. She's like a paper doll compared to Eli, for whom we get multiple branches of his family tree. What does Eli like about her other than the fact that she's hot? What keeps her coming back to Eli, a man who underperforms in bed and spends too much time in his underwear? Oh that's right, he's a cowboy who writes magnificent poetry and lives by himself out under the open sky.