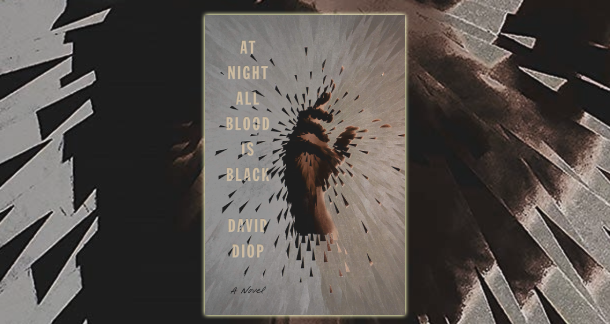 There is something both satisfying and saddening about reading a book no one else seems to have heard of. At least, no one else I know. On the one hand, I feel like I’ve discovered this great new thing. On the other, if it’s so great, why is it not on anyone else’s radar?

That’s how it was with David Diop’s At Night All Blood Is Black, a World War One novel that, for me, is up there with All Quiet On The Western Front. It is brief, intense, moving, gutting, enlightening, and largely unknown amongst my little literary circle.

In fairness to Diop, this book is not actually unknown. It was originally published in French in 2018, and won the Prix Goncourt des Lycéens that year. The English translation won the 2021 International Booker Prize. It has been, appropriately, feted.

Yet somehow when I went to look for a copy it was in none of the libraries to which I have access—something I have since rectified with the help of some excellent librarians. And since no one I knew had heard of it, no one could lend me a copy. Sure I could get it on Amazon, but finding a copy of a book this good shouldn’t take multiple steps. Nonetheless, here we are.

Let me take a moment to tell you why At Night… is so good, and then discuss a little bit about why I think it’s not making the rounds like some other novels do.

The plot revolves around Alfa, a Senegalese soldier fighting with the French army in the trenches of the first world war. After witnessing his best friend’s horrific death, and having been unable to show mercy by quickly ending his suffering, Alfa slowly devolves into madness due to the horrors of a brutal and almost meaningless war.

"At Night All Blood Is Black" is the kind of book you can read in two days. It will give you an emotional gut punch, and leave your mind frayed, but you’ll be glad it did.

A few things raise this book to the upper echelons of not only war novels, but novels in general. First is that it’s about a little-known part of a well-known war. I had no idea how many Senegalese troops were involved in the fighting, and this story got me to research a ton about it, not because Diop failed to include important information, but because he intrigued me so much that I needed to know more. That, for me, is the best kind of rabbit hole a novel can send a reader down.

On a linguistic level, Diop masterfully uses cadence and repetition to show the mental descent of the main character. Credit has to go to the translator here as well, because line-by-line this was an excellent read, with the prose perfectly complimenting the content.

Finally, Diop’s representation of the horrors of war are judicious. He never lingers on any one thing, never feels the need to explain that war is an abomination, but he still manages to show readers enough that they have a visceral reaction. This happens on a detail level as far as showing physical injury and death in a brief yet effective manner, but also on a macro level in that the book is pretty short. Few people would want to linger with this material for three or four hundred pages, and being able to finish the whole text in two or three days gave it an intensity without making me feel like I was completely worn down by the experience. It evokes deep empathy without exhaustion.

So then, despite At Night… being a masterful novel on many levels and the translation being of the highest order, why does no one seem to care? I have a few theories. Please take them for what they are—this isn’t research, just my own speculation.

I suspect that few people are in the mood for a story like this right now. We’re just getting over a pandemic, one which maybe isn’t over, and so jumping into another nightmarish situation isn’t really how people want to spend their leisure time. I find that a story like Diop’s puts Covid in a bit of context, but I can see how that wouldn’t necessarily be the case for everyone.

Recent war cinema may also play a role. The excellent film 1917 came out three years ago, and while the narrative is wholly different from At Night… it’s a viewing experience that takes a lot out of a person. Dunkirk is another one here, as is, to a lesser extent when it comes to physical brutality, Darkest Hour.

And then the relative subtlety of Diop’s novel may also play a role. It takes some work to read this—the kind of work I find engages me deeply with a book, but that still requires a good deal of mental energy. I wanted to read the book, and I enjoyed it when I did, and now I’m singing its praises, but even I had to pick a good time to sit down with it. I needed the right mental space, and not everyone comes across that readily.

War plus required effort plus a pandemic equals a lousy time for a book like this to be released, though of course none of that is Diop’s fault.

Finally, I suspect that an African POV plays a role. Honestly, how many readers, even avid readers, can name an African author not called Chinua Achebe? (I’m not counting South African authors like Nadine Gordimer here, as they’re in the more Anglo tradition, though no disrespect to them.) Americans tend to be woefully ignorant of all things Africa, including literature. The reasons why are for a different article.

And do not take this as me feeling like I’m much different. I had to look Senegal up on a map. I had to research its connection with France. But I’m glad I did. And given how deft Diop’s book is, I hope others will follow the same path.

At Night All Blood Is Black is the kind of book you can read in two days. It will give you an emotional gut punch, and leave your mind frayed, but you’ll be glad it did. Like the best books, this one will make any reader’s world view a little bit wider. It’s just a shame more people don’t know much about it.

Get At Night All Blood is Black at Bookshop or Amazon