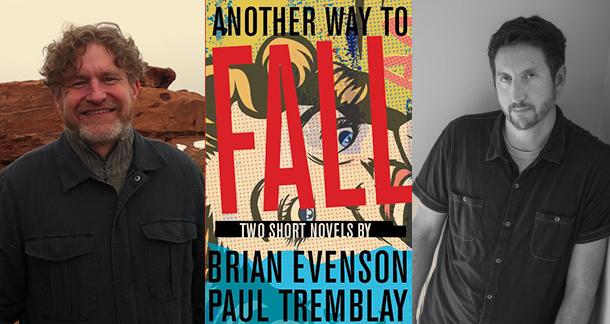 Some writers write the same book over and over again. They may change a name or two, set the thing in Pittsburg rather than Peoria, add a plot twist here, a digression there—but the same pattern remains, like an old comfortable t-shirt that they can’t stop themselves from slipping into.

In case you didn’t realize it already, Evenson was writing about Paul Tremblay. No, he’s not by any means saying Tremblay writes the same piece of shit, paint by the numbers narrative every time. Evenson continues in his introduction:

Paul Tremblay is exactly the opposite sort of writer.

And let’s face it, it’s true. In the decade or so I’ve been reading both Evenson and Tremblay, neither have been the type of storyteller who constantly revisits the same themes over and over again. Most of the time, these two masters of the weird rarely revisit the same genre, and if they do, they completely flip it on its head and make it their own. What I find most fascinating about the styles of both authors is how much their individual styles have changed over time.

And change they most definitely have, which is quite evident in their shared novella collection from Concord Free Press, Another Way To Fall.

It’s fucked up in a hilarious 'I like watching hours and hours of YouTube videos of people getting kicked in the balls and lancing their own boils' kind of way.

Now, before anyone gets their panties in a bunch, I’m not using change as a four-letter word. Evenson and Tremblay are natural born storytellers, but the voices both authors have cultivated over the last five years—Evenson with his Kafkaesque minimalism and Tremblay’s sharply cinematic narratives—are distinctly different than the novellas presented in Another Way To Fall. Yes, both pieces in the book are reprints, but quite literally, they are the best short novels Evenson and Tremblay have to offer in style, originality, and tone.

The opening novella of the collection, “Baby Leg” by Brian Evenson, is one of those stories that almost have a mythic quality about them. The original book was offered as a limited edition with Evenson’s “bloody” hand-print and cryptic drawings gracing the cover (no, I don’t have a copy, but I’d love to get my hands on one), and was put out by Tyrant Books way back in 2010. Because I’m not big into writing book reports, here’s the skinny about “Baby Leg”:

In Baby Leg, a mysterious man awakes one morning in an isolated cabin with no memory of how he’s gotten there—or why he’s missing a hand. The book has been described as “the kind of thing that might have happened if David Goodis and Jim Thompson tried to write a mad scientist story in the middle of a bender.

"Baby Leg" reads almost like an action thriller if it was plotted by David Lynch. Whereas most of Evenson’s recent stories have taken on a far more atmospheric and slow burning tone, “Baby Leg” starts with a bang and a body count and doesn’t let up. The novella very much reminds me of my introduction to Evenson, the once impossible to track down, Last Days. Of course, "Baby Leg" is by no means an action thriller—and as expected, the prose is pure Evenson—but his voice in this particular piece has an urgency that I’ve rarely experienced in the author’s work.

Baby Leg’s stunning weirdness is the perfect lead-in to Tremblay’s mind fuck of a novella, “The Harlequin and the Train.” Once again, here’s the skinny from Concord Free Press:

Powerful and profoundly eerie, Tremblay’s The Harlequin and the Train spins the surreal tale of a young train engineer, a commuter train accident, and its disturbing aftermath. As novelist Laird Barron put it, Tremblay “pierces the veil of prosaic suburban life to reveal its dark heart."

I was lucky enough to snag a copy of “The Harlequin and the Train” when it was originally published, and for one reason or another I sat on it until the beginning of 2017.

I think the one thing I admire most about Tremblay is his ability to move between genres; he goes from satire to crime to SF to horror without batting an eye, and has very little trouble with combining the aforementioned genres and creating something uniquely his own.

By the way, folks, I’m going to evoke David Lynch again, and Saint J.G. Ballard in my review of “The Harlequin and the Train.” Because, to be honest, it’s the only way I can easily describe this weird little story about folks who get their jollies by throwing bodies made of raw meat dressed as clowns in front of speeding commuter trains and watching the reactions of the passengers as they devour the supposedly dead body.

Yeah, “The Harlequin and the Train” is some seriously fucked up shit.

But it’s fucked up in a hilarious I like watching hours and hours of YouTube videos of people getting kicked in the balls and lancing their own boils kind of way.

Maybe I went a tad overboard with that particular description? But seriously, I’ve more or less read everything Tremblay has published, and no story or novel he’s written has disturbed me as much, and not so much because of the plot, but because of Tremblay’s ability to show the reader how vulnerable we all are. We are always one step away from tragedy whether we’re raving lunatics or lonely men and women doing their best to hide away from the world.

Needless to say, both stories are great and deserve a massive audience. Which is easy enough to do considering Concord Free Press’ business model.

And what is that model you ask?

Well, publisher Stona Fitch (Who’s also the author of one of the most brutal novels of the new century, Senseless) just gives the books he publishes away.

Yeah, that’s right, you can get your copy of Another Way To Fall 100% free of charge.

Here’s the rub, you have to make a charitable donation and pass the book along to a pal once you’re done reading it.

So, yeah, jump on that shit, folks, Another Way To Fall is more than worth the price of admission.

Get Your Copy Of Another Way To Fall From Concord Free Press.

Some of the university provides scholarship to some student depends on their previous academic history. Scholarship criteria depend on My-assignment.help subjects which you wanna choice for your studies.