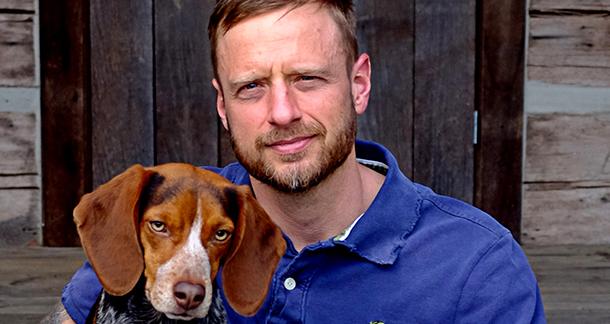 I first published Frank Bill in the BEAT to a PULP webzine back in 2009, and have had the pleasure to do so a few more times in the years that followed. From the start, I was taken with the intensity of Frank’s characters; individuals living on the fringe of society, who, often through no fault of their own, are reduced to primitive survival. He doesn’t pass judgment on these creations; instead he props them up, warts and all, showcasing the driving powers behind desperation. His latest, The Savage, continues this raw vision.

Over the years, I’ve stayed in contact with Frank—email here, direct message there—but this interview caught me up to date, finding the Indiana writer on the cusp of new ventures as his debut novel Donnybrook is being made into a movie, currently in production by director Tim Sutton. The starry light of Hollywood’s call hasn’t changed him a bit. This back and forth Q&A took a few weeks while working around the intersection of Frank’s competing schedules: a blue-collar job where he slogs the night shift, training for the run of his life, and his writing pursuits. He remains as candid and humble as ever.

What have you been up to for the last five years since the release of Donnybrook?

Just before Donnybrook was released, we’d sold my next two books to FSG [Farrar, Straus and Giroux], The Savage and Back to the Dirt. Went to New York for some pre-publicity. Met and hung out with my editors, and the team at FSG and had dinner with some great reviewers/editors. Hung out with my agent. Did an event with John Darnel (fucking total bad ass). Met Victor Lavalle (huge fan [of his]), great guy and bad ass author, hung out with Todd Robinson at The Shade Bar, great dude!

We live in this age of button pushing, someone else doing all of our thinking for us...It makes us weak and lazy. In my opinion the meek would not inherit the earth.

I did a bit of book touring in 2013, (Louisville, New Albany, Bowling Green, Milwaukee, San Diego, LA). In 2014 I went to France for a book festival. Spent two days in Paris, three days in Lyon. Awesome trip. Had a great time, met my editor and publicist and publisher and a slew of French authors, all of whom kicked ass!

Got contacted by an Indie comic book company to write my own series, just had to pitch an idea. I pitched. They wanted it. So The Savage got pushed out so I could work on this comic book. A year later, the deal fell through after my agent worked her ass off on it and my book editor had pushed out my next book. Needless to say, no more comic. Between 2013-2015 I was dealing with a lot of back and forth interest in Crimes in Southern Indiana as a possible TV series. The rights were bought and they keep getting bought by the same studio. There was interest from a lot of film people for Donnybrook. But things kept falling through. In 2016 my film agent sold the Donnybrook option to Rumble Films (filming is slated to begin in late October 2017). I did a book festival in 2016 in Lillehammer, Norway. Met my editor, had a good time. Did some hiking, lot of running and lifting. All I can say is Norway is beautiful!

I finished a novella in 2016, a short story that was a novel idea that I sold to Playboy, I’m still working on that novel, The Disgruntled Americans. And I got back into strength training in 2014 (not missing workouts, I’d been hit and miss for about 2 years) and started trail running between 30-40 miles a week. Quit drinking and cleaned my eating up. Things were getting out of hand, I’d basically lost my discipline and I blew up from 145-150 lbs to 185. At 5’5”, that’s a nightmare. Needless to say I’m 50 lbs lighter and healthier.

What’s it like seeing your book turned into a movie? Are you concerned at all with the end results?

At this juncture I’ve not been to the set, but I’ve spoken and broken bread with the director Tim Sutton in Louisville, Kentucky, at an upscale bar-b-que joint. He’s a very cool and down-to-earth guy and I’ve watched each of his Indie films, he’s grown with each one. He’s a trooper, diving head first into the project, he’s eating, breathing and sleeping Donnybrook and that’s what you want. With Frank Grillo attached, I’m a huge fucking fan of Kingdom, and Jamie Bell and James Badge Dale, Margaret Qualley, what’s to worry about. They’ve got my blessing.

The plan is to hit the last week of shooting for the actual Donnybrook (which is The Savage release week) ... my work schedule coupled with the release of The Savage and my deciding to train for a 50K in December has kinda sidetracked my time. But you know I still work for a living, I’m far from fucking pampered.

With still holding down a job, when do you find time to write?

Went back to nightshift. I’m not a day work guy. Hate that shit. I especially hated working 5 days a week, Monday through Friday. I only work three or four days a week now, rotating every other week, getting three days off then four.

Now that I’m back on nights, I pretty much keep journal notes. Compile them and write from 12 AM on my laptop until I get tired. My writing anymore seems to come in large chunks. Then I’ll step away. Let things breath. Return and start tearing things apart.

When you’re writing a novel like Donnybrook or The Savage, how do you begin? Is it with character or with theme? Some other springboard?

Character with moving description and I just go from there. Usually revisiting my opening every time I sit down to write. Constantly tightening and shifting it around. Big thing for me is action. My biggest fear is boredom and getting wordy. If nothing else I deliver a lot of masculinity on the page. I don’t consider themes, though there are many I find after I’ve finished a novel. I think the biggest thing that no one has mentioned with The Savage is, it’s more of a mystery until all the pieces are laid out and then you just follow the trail of blood and greed and the want for power.

Mystery, for sure, but most readers are going to see The Savage first and foremost as dystopian with one nightmarish, fucked up reality. Been overdosing on The Walking Dead and reruns of Red Dawn? 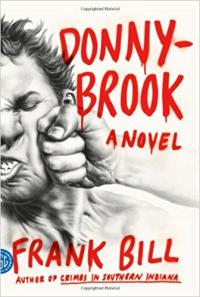 There could be some Red Dawn in there, the original, from my childhood. But I started writing this right after I’d written Donnybrook. Wrote the first 10k. Thought it was gonna maybe be a young adult novel. At that time Van Dorn was just called The Boy. So I let it sit for a few months. Several months, actually. Came back to it. Wrote the first 100 pages. Sent it to my agent along with 100 pages of another manuscript I’d begun titled Back to the Dirt. We sold each of those. Donnybrook was released and I wrote the next three-quarters of The Savage until a chance to write my own comic book came about and I switched gears. I wish I could give some credit to The Walking Dead but I didn’t start watching it until The Governor was involved.

The Savage came about more with my ideas of what people have lost skill wise. The pioneering traits of our grandparents and ancestors. I grew up hearing and seeing a lot of skill sets I wished I had paid more attention to. But you live and learn. Another thing about The Savage is it deals with the power trip everyone gets on with their religious beliefs, standing on the soapbox and pointing fingers rather than owning up to right and wrong and just being a decent human being, a leader. There is also society’s dependence on technology, fuel, and grocery stores for food for survival. We live in this age of button pushing, someone else doing all of our thinking for us, always looking for the quicker way rather than doing the hard work and creating the discipline it takes to become accomplished. It makes us weak and lazy. In my opinion the meek would not inherit the earth.

I don’t see you on social media as often as some other writers who bullet their feeds every hour. Any particular reason?

I like to use social media as a platform to show my work. Or other artists’ works and maybe inspire a bit of discipline or even motivation into others. For the most part social media can become a virus, a real time-suck. For me, I can interact with some fans from time to time. But I don’t think people need to know where I’m eating at, when I’m going on vacation, or listen to me whine or bitch about every little problem in the world. I do not wanna point fingers. Judge or cry about life. Or get into politics, to me that’s fucking depressing. I keep most of my personal life personal. I’m not a privileged guy. But I’m fortunate and thankful to have what I have and that’s because I’ve worked my ass off for it just as all writers have. I still work in a factory. My writing comes in large chunks compiled in a journal over time rather than sitting at a computer every day. I spend most of my time with my wife and my dog. I trail run, a lot. I strength train. I grill a lot of red meat. And I squeeze a good book in when I can. Sometimes it's fiction, sometimes it's nonfiction. I’m pretty simple.

Is there a difference between serious popular fiction and literary fiction? In many ways what I see you do is straddling both worlds.

Who are a few writers today that you see as being on the cutting edge?

All those writers spin their silk with the weight of the world clearly in view. I understand that The Savage is just a novel but is it fair to assume that you are influenced by today’s headlines of geopolitical unrest, gangs in America, mass shootings, etc.?

I’m influenced by what goes on around me, yes. My community. My coworkers, friends and family. Basically, the plight and struggle of man. A lot of what went into The Savage was where people come from, their migration, who they are and how they struggled and how that struggle changed them. Several books I read while writing The Savage: Detroit, Murder City, A Long Way Gone, The Devil’s Highway. To say I’m influenced by the human condition, violence and the depravity of what human beings will do to one another is an understatement.