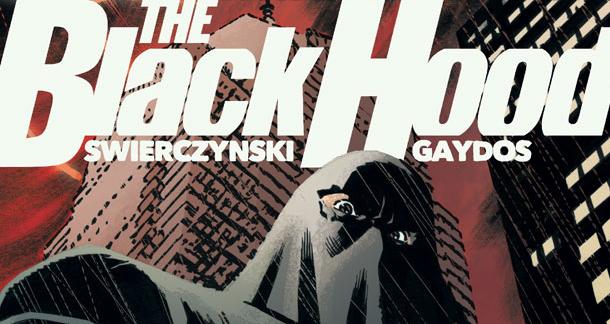 Denizens of LitReactor should be familiar with Philadelphia’s Duane Swierczynski. Aside from his Like Your Life Depends On It workshop class and an appearance in 10 Questions, the man has pumped out nearly twenty books of bat-shit crazy crime fiction and nonfiction, as well as more than 250 comics, including entries in the X-Men, Judge Dredd, and Birds of Prey lines, among others.

One of the most apt descriptions I’ve seen of Duane’s writing was in the New York Journal of Books, who said he writes “like Elmore Leonard on adrenaline and speed.” I’ve read six or seven of his novels — most in one go because they are the best combination of funny, violent, and suspenseful — so I was excited to hear he would be working with Archie Comics’ Dark Circle imprint as they relaunch their superhero line. Duane’s entry, The Black Hood, is the story of a Philly cop, Greg Hettinger, who is shot in the face during a street confrontation (no spoilers here: it happens in the first two pages). Shunned because of his now-frightening mug, he decides to don a mask and kick some ass.

I got a chance to talk with Duane about his experience with The Black Hood, the process of writing comics versus novels, the best way to win a cage fight, and Mike Ehrmantraut.

How did you become involved in rebooting The Black Hood?

This is entirely the fault of Alex Segura, the editor of Dark Circle Comics. I’ve known Alex for quite a few years, going back to his days at D.C. Comics. We’re both crime novelists, and both fans of the darker, wilder fringes of the noir world. (Which is to say we’re both really weird. So naturally we hit it off.) Anyway, when Alex reached out to me last year about The Black Hood, I had to admit that I knew nothing about the character. But his pulp roots intrigued me, and at the same time I was noodling around with a “good cop gone bad” story. I pitched that, thinking it was a long shot, since the Hood seemed to be more superhero than anti-hero. So I was pleasantly surprised when Alex and the gang at Dark Circle not only liked it, but encouraged me to go darker with it.

What was it like to update the character for modern audiences and their expectations?

Of course I’m hoping that comics and crime fans connect with it, but trying to please everybody from the get-go is the road to madness.

I honestly don’t worry about audience expectations. The story is boss — and more importantly, I wanted to make sure it would be a story that I’d have fun telling. Of course I’m hoping that comics and crime fans connect with it, but trying to please everybody from the get-go is the road to madness. My heroes are writers like David Goodis and Patricia Highsmith, who sat in their quiet rooms and wrote some tremendously dark and twisted material. Clearly they didn’t give a fuck about audience expectations.

How collaborative is the writing process? Do you and the artist pitch ideas to each other or does he just draw what you write?

It’s sort of a Hollywood-style process: I see Alex and the Dark Circle gang as the producers; I’m the screenwriter; Michael Gaydos is the director, cinematographer (and to be honest, the entire cast, the gaffer, the lighting technician, etc.).

So the ball started rolling with the producer (Alex, Dark Circle) asking me to pitch them my take on the Black Hood. I did, and they asked me to flesh it out over the length of an arc (generally, four or five issues). Once that was approved, they brought Michael on board, and he started doing character designs and such while I scripted the first issue. Then, after Alex edits, the script is sent to Michael. But I’m no more telling Michael what to draw than a screenwriter is telling a director what to shoot — my script is a blueprint, and I’m always happy when an artist sees a better way to break down a page, or comes up with a brilliant little unscripted detail that reveals character.

Funny thing is, I’ve never actually spoken to Michael; our communication has been purely e-mail so far. He probably has no idea how impossibly handsome I am.

I liked the captain’s nod to the original Black Hood in the hospital scene. Will there be any relation to prior incarnations, or is this completely new from the ground up (minus the occasional reference)?

The world is out there for future exploration, but in the first arc, at least, we’re focusing on Greg’s life, how it’s quickly circling the drain — and the only life preserver looks like a ratty black hood.

How involved was Alex Segura in the process, as an editor?

Alex is the best kind of editor — super-supportive, but also knows how to step out of the way and let you go wild. I think this is because he’s a writer, too, and treats fellow writers the way he’d like to be treated.

What type of things do you look for in a comics project?

Actually, it’s similar to what I look for in a novel: a story I’d have fun writing for a long haul. That’s really the only thing that gives me pause when I’m approached with something. Could I see myself doing this for the next 12 issues? Or 25? Is there enough for me to explore?

How do you approach comics versus novels? Do you still do the jacket copy-outline-etc. process you've talked about before?

Good memory, sir! With comics, it’s a little different. Instead of writing imaginary book jacket copy, I write a pitch letter to my editors, giving them a glimpse of what I’d do with a particular character. The dirty secret is that I’m also writing this pitch letter to myself, to see if I can get excited about it, too.

But I’ll outline more extensively than I do with novels. For each issue, I’ll write a 1,000 word “beat sheet,” where I map out the main plot, character notes, etc. This is meant for my editor to read and give notes. I’ll repeat this with every issue, kind of like running little sprints. With novels, of course, it’s more a lonely marathon; nobody sees a word until I’m finished.

Mr. Hardie is still enjoying his semi-retirement in an undisclosed location somewhere within the continental United States. I don’t think he’ll be back in Philly anytime soon.

However [HAM-HANDED SELF-PROMOTION ALERT!] . . . my next novel, Canary, which drops the same week as The Black Hood #1, is also set in Philly, with Sarie “Canary" Holland scrambling down the same mean streets as Greg.

God, I hate myself for doing that just now.

Okay. I’m over it. Next question?

Cage match: you and Michael versus Wendig, Adam and Wilfredo. Which weapon do you choose and who wins?

Michael and I have already planted a bomb inside the cage ahead of time. So it’s just a matter of how hard Wendig, Adam and Wilfredo will want to beg for their lives.

Not really a question, but please dear god in heaven tell me someone bought the rights for the Mike Ehrmantraut character for you to write.

That would be my dream comics gig — you have no idea. He represents an era of Philly that is endlessly fascinating to me.

And if The Black Hood were to ever run into Mr. Ehrmantraut? I know I shouldn’t say this, but I’m not liking the Hood’s chances.