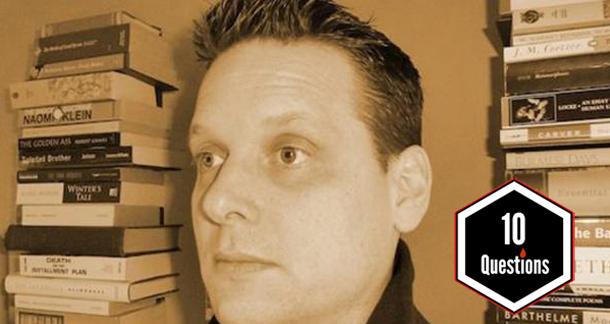 Author Sean Beaudoin has thrown a brick through virtually every window in the hallowed and stuffy House of Writing. Although best-known for his string of popular YA novels, Beaudoin has contributed features to scores of magazines, danced the "Lit Journal Shuffle," crop-dusted acres of writing and culture sites, and way, way back in the day, launched his own fanzine, penning defiant late night manifestos to a readership so far out on the fringe that zip-locked baggies full of toenail clippings routinely landed in his mailbox. From more than one person.

The past year has been unusually hectic for Beaudoin; his noirish and hellaciously entertaining teen crime thriller, You Killed Wesley Payne, hit the shelves in 2011, soon followed by The Infects—Beaudoin's jaw-droppingly grisly zombie novel set in a wilderness labor cap for juvenile delinquents. With bracing doses of his typically risible dialogue and an inventive plot that finishes with an ending that will surprise even the most grizzled of surprise ending veterans, The Infects has already carved a sizeable gash into the forearm of pop culture.

A highly-prized mentor to other writers of both the "established" and "would-be" varieties, Beaudoin dedicates wide swaths of his time back to the literary community, playing prominent roles at writing conferences and readings, as well as recently co-founding the insurgent culture site The Weeklings. He currently lives in Seattle with his wife, daughter and highly snooty vinyl collection.

When I was in second grade they did this great thing where the teacher would take you into a corner and sit at a typewriter and transcribe while you told her a story. My mother still has a few of them in a trunk and I was astonished to read one a few years ago. It had nuance, pacing, raw chops, and a hint of postmodernism. It was about a kid who was building a rock wall, slathering on the cement with a trowel, when the rocks suddenly came alive and staged a sort of Occupy protest about being arranged in a fashion not of their choosing.

Pure Bacchanalia. My wife was hugely pregnant, so I think I whipped up a tray of Pillsbury dinner rolls, pears, blue cheese, cornichons, canned cranberry sauce, and prosciutto. Then we hunkered under the covers and watched an entire season of Oz.

Ancient Mac laptop, blaring Shostakovich, iced Pellegrino, and a ready supply of high-quality toothpicks. I am also usually pant-less and barefoot. You can’t crimp the blood flow and expect alchemy to happen. My style is to think of nothing, attempt nothing, aspire to nothing. I enter a sort of fugue state and let my head float on a mental tether like a cheap balloon. If I start drooling, I know I’m onto the good stuff.

I’ve made every possible mistake and they all seem equally mortifying. Quoting Voltaire. Wearing turtlenecks. Napkin poetry. The biggest one may have been to spend my mid-twenties believing in the myth of the “enigmatic young writer.” Numerous girlfriends and co-workers bore the brunt of that performance. I also wasted a year trying to be Raymond Carver, knocking out two-dozen utterly derivative and un-publishable stories with no monetary or stylistic benefit.

Well, it’s called The Infects and it came out three weeks ago. I will not achieve catharsis until we’re in our sixth printing. Although it’s possible that every molecule in my body that once wanted to sit down and write a black comedy zombie opus has now been thoroughly expunged. But I would describe that as being closer to detox than catharsis.

Probably Dim from A Clockwork Orange. We could sit together at the old Moloko milk bar, going stein for stein of frothy 2% without having to say much. I value silence in a drinking partner. Also, he’d clear the place out if anyone got cute and tried to jump our turn on the pool table. Finally, he would have learned his lesson about making bovine noises while random matrons sang Beethoven arias, so I wouldn’t need to worry about keeping him in line once he got buzzed and the choruses of Ludwig Van rained down around us.

At The Indie Purist, which is just a few blocks away from my house and carries pretty much every title ever released, is run by a wonderful local woman and her many cats, and completely eschews all delivery technology and pricing algorithms.

Actually, pretty much wherever I can get them. I totally support local bookstores philosophically, politically, and monetarily. But I sometimes get my Americano at Starbucks too.

I spent years writing about bands that I both liked and hated. I’ve written innumerable negative movie reviews. I’ve reviewed bad restaurants and good bars and mediocre strip joints. Essentially, I deserve zero karma in terms of being slagged. That doesn’t mean I don’t want to be universally loved and admired just like everyone else, but I’m pretty clear-eyed on what it’s like to be sitting at a desk in your boxers breaking down someone else’s work. A certain percentage of people are always going to hate what you do. I’m cool with that. I genuinely appreciate a well-written and perceptive slam. The clumsy or rote ones are a little harder to swallow. I think the only thing that truly annoys me is when certain publications run anonymous reviews. If you’re going to squat on something that someone else spent years toiling over--or even cranked out in a month strictly for cash--you should at least have the stones to put your name beneath it.

There are hundreds of authors for every reader. And there a thousand authors for every reader that actually pays cash for books. Any advice that intimates it’s possible for more than a handful of people to make a living as a writer is bad advice. As a culture we sort of congratulate ourselves on our unwillingness to “step on anyone’s dream.” But I think there’s a reason we’re 29th in worldwide math scores and 22nd in English and 40th in science. We need more institutionalized dream-stepping. Not everyone can or should get an MFA in creative writing. My advice is to study something else, read all the time, and write on the side. Even better: get a shit job for as long as you can stand it, stay up late working on your novel, join a writing group for free critique, and then blow all the money you saved on tuition backpacking across Eastern Europe and Southeast Asia for a year.

WILDCARD: You can make one grand, sweeping, lasting change to the publishing industry. Go.

I would make it illegal to sell new books for a penny less than the cover price. No discounts. No bulk buying. No big-box stores undercutting as a loss leader. No Amazon pricing-throttle. It would allow publishers to bring prices way down. A $25.99 (totally ludicrous) hardback would cost $14.99. It would take huge volume retailers out of the equation entirely. Indie bookstores would return and flourish. I would also limit the number of books publishers could put out, based on a formula linked to the amount they intended to spend marketing and developing each one. Finally, I’d make it a punishable offense for authors to mention themselves on social media.

Hard to beat a Joe Daly/Sean Beaudoin interview combination, regardless of who is playing what. Still, hats off to Mr. Beaudoin for the 1 - 2 novel punch. I'm jealous. And happy for you. And ready to run from zombies at a moment's notice...

I'm actually wearing a turtleneck right now... Can't help it if they look damn good on me (and were cheapsy at the thrift-store).