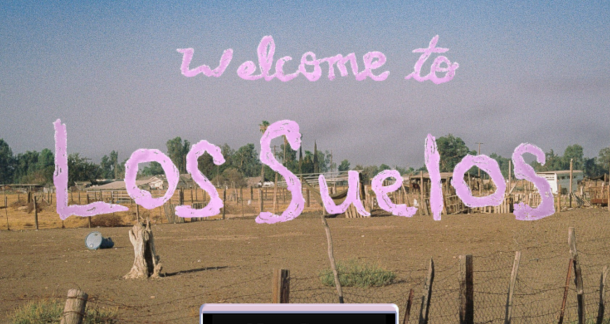 America is riddled with countless strange small towns, but one of the weirdest — Los Suelos, CA — can only be found on the Internet. Within its city limits you'll find a sprawling, multi-media, interactive anthology that fuses fiction writing, music, art, and a goddamned video game running through it all. Los Suelos goes far beyond any one-dimensional self-serving literary journal, with proceeds benefiting underfunded California agricultural workers.

Questions answered by Karter Mycroft (KM) and Ian Kappos (IK), with occasional transmissions from Lauren Lavín (LL), who could only communicate intermittently from her compound deep in the bowels of the Earth. All three are co-creators of Los Suelos, CA , as well as members of the closely associated punk band Fluppies.

How did the idea for such a vast, ambitious project come about? What was the timeline from inception to conception?

IK: In Winter 2020, Josh hit me up with a loose idea for developing a fictional small town that could be a shared world. Shortly thereafter we roped in Lauren, Karter, and Bart. We just threw everything on the canvas, sharing ideas, developing ones we all were really stoked on. It got bigger and bigger from there, none of us really knowing what form it would end up taking.

We agreed it was important to have an original setting, something that most of us had personal knowledge of, familiarity with. The Central Valley just made sense—it’s a largely overlooked area, but if you hang out there for a while, it’s fucking weird. There was so much potential for what we wanted to achieve.

It really shits on the idea that writing is a solitary art and necessarily sidesteps a lot of the gatekeeping cool guy mystique of the broader alt-lit/online lit world.

In March 2021, we applied for a Grant for the Web. A couple months later, we got the grant. Suddenly we had the resources to do this crazy thing we still didn’t know how to pitch or describe. We’d been steadily working on it, adding to the town’s lore, creating central characters. The process was very organic—we had so much fun doing it.

When the actual grant period began, we had to hit the ground running—by then, not only did we have what Karter referred to as a “metric fuckton” of ideas, but the project’s scope had become so ridiculously ambitious that we couldn’t afford to waste time. Even though we’d done a lot in the months leading up to the start of the grant term, the workload quickly skyrocketed. Pitches to field, an album to make, a game to create, a website to build, an online presence to be established, a budget to be budgeted. It really couldn’t have been done without all hands on deck. From inception to launch, Los Suelos, CA ended up being around a 14-month-long project.

Considering its multi-media scope, were there times you hit a wall and had to employ other artists in those fields, or was it obvious from the get-go it would have to be a vastly collaborative endeavor?

LL:  We def set out to have all types of artists involved, but some, including us, got involved in more/different ways than expected. Maria Pogosyan’s photography was huge, Allison Mick's art, the fonts and design for the stories on the site, a ton of other stuff I'm blanking on, not to mention the video game exploding in scope and the actual world-building done by contributors; it's like, we planned it to be “vastly collaborative” and still, the results exceeded anything we imagined. It really shits on the idea that writing is a solitary art and necessarily sidesteps a lot of the gatekeeping cool guy mystique of the broader alt-lit/online lit world. Straight up collective creative work is the way.

KM: We definitely thought a lot in the planning stage about who we wanted to help us out with this stuff. Some things we wanted to do just weren’t in any of our skill sets—web design, video production, scripting for game design. That’s to say nothing of all the writers and artists we knew we were going to solicit, and all the fantastic pitches we got. I want to say over 60 people have worked on this thing altogether, and some are still working on some top-secret bonus material still in the oven. We got to meet and work with some really kick ass artists in so many fields for this thing, I’m extraordinarily thankful.

Let’s talk about the video game feature on the site — is the aim to merely navigate the map of Los Suelos, or is there a deeper plot involved?

KM: There’s a narrative to the game, and some light role-playing elements. You play a character whose car breaks down outside of town, and you’re left to search Los Suelos for someone who can help you fix your car, give you a ride, let you borrow a phone, etc. Of course you quickly find out that this is not a normal place, which escalates when you notice yourself becoming weirdly obsessed with the idea of just sitting down and digging, then you’ve got that on your hands. There are five possible endings, which all depend on the choices you make, and you can determine the fates of a few characters from the various short stories as well. My hope is that readers/players really get the experience of being in this place, interacting with the stories directly and making choices about them.

Do you see a trend in these new interactive literary sites? With Los Suelos, there’s also Bear Creek Gazette and Void Space. Why is the collective consciousness creating these now?

KM: I hope it’s a trend! I’m a huge fan of both Stu and Katy’s work, and this movement towards more immersive, interactive zones of underground fiction is really exciting to me. I have to give the obligatory shoutout to Misery Tourism here, which as I understand actually started out as a place for subversive tabletop games, and continues to publish alternative-form and interactive pieces, especially Rudy Johnson’s always-brilliant creations. I think there’s something inviting to readers about a piece they themselves can exist in. With interactive fiction the buy-in is higher—you have to be willing to actively engage, to truly immerse yourself in the text and make decisions about it—but I think the payoff can be really wonderful. My hope is that if the trend continues, people in this scene will have more and more stories, games, etc that they remember as if they were there, because they were.

LL: More and more people are rejecting and pulling away from the increasingly dull and over-funded Disney-Marvel-Streaming-Service hegemony in favor of experiencing and even creating stuff that's actually good. Like Los Suelos

Was the band Fluppies created specifically for the world building of the project, or did they have a long itch to play “a manic fusion of hardcore and whatever the fuck else they want?” 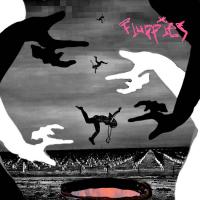 IK: For any Fluppies truthers out there, I’ll let you know right now that doing a deep dive on this might lead to some confusion. The unrelated but related origin story is that Karter and I wrote a story about a dude suffering from a parasitic gooch infection, we gave the parasites names (Fluppies), and then titled the story "Fluppies," which was originally published at Misery Tourism. When we started entertaining the idea for a musical element to Los Suelos, I said something like “Wouldn’t it be funny if we called a band in town Fluppies?” The name kinda just stuck.

Karter and I had already talked casually about playing music together. Because we were really giving a lot of thought to this band as they were in the world of Los Suelos—its members, how the band would’ve sounded, what they would’ve been into, how they’d have done it, what their lyrics would be like—the whole process became really unique and felt fresh for all of us. I’ve definitely had a lifelong itch to play “a manic fusion of hardcore and whatever the fuck else,” so getting the opportunity to synthesize creative ambitions in a really special, really cool way that felt natural and right was such an awesome experience. We couldn’t pass it up.

KM: I think the very first time I hung out with Ian and Lauren we talked about starting a band. Pretty sure Ian was pitching a basketball themed powerviolence trio called “Charles Barkley.” For better or worse, we ended up in a Hollow Earth themed post-hardcore band instead—I think this was always going to happen, it was out of our control. Also, I need to shout out our drummer, Max Pretzer, who was on board the second we asked him. Max is a writer, poet, genius, wine purveyor, one of my oldest friends, and the best drummer in town. Could not imagine having done the record without him.

Proceeds from the site support the California Rural Legal Assistance Foundation, and Los Suelos resembles one of these overlooked/underfunded agricultural towns — did your upbringing in Stockton give your closer proximity to this concept/consciousness?

IK: A lot of my family’s in and from Stockton, Lodi, the broader region. I grew up in Sac and the Bay Area but spent a lot of my life around the Delta, staying with family, traversing the Central Valley. My dad was a Stockton punk back in the late ’70s/early ’80s, and with all the stories I’ve heard about what it was like growing up then, being a weirdo in a backwards town, and then my experience with it—it’s just got its own flavor. Not many people know much about the area—driving up 1-5, or CA-99, people let their eyes glaze over, it’s just a hundreds-of-miles-long empty pocket of space between SoCal and Northern California to them. But there’s something uniquely bleak about the area, something inherently surreal in a way you can’t quite put your finger on. There’s inherent beauty, too, a rich history in a vast agricultural epicenter with people from all walks of life. But then there’s issues with public funding, with economic assistance — a lot of people barely making enough to get by. Again, it comes back to being ignored, overlooked, not prioritized—as a region, and as people who make up a region. I’d like to say this knowledge informed basically every creative decision we made. We wanted to do it justice.

For someone who has just recently begun playing casino games, I can already report some impressive wins. When I achieved my first significant triumph a few weeks ago, I was ecstatic. However, the truth is that I had practiced on a quick hit slot machine. This is a great place to start if you've never done this before.