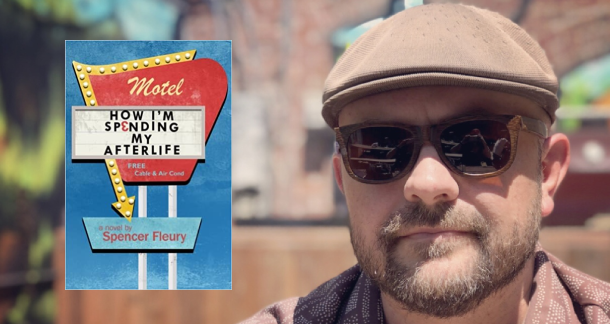 I’ve recently had the opportunity to work with debut author Spencer Fleury on a sort of re-release of his sort of crime novel, How I’m Spending My Afterlife. I write sort of, because Spencer will tell you that How I’m Spending My Afterlife is more than a crime novel, it’s also a character study and dark comedy. Further, the book was previously self-published, but now has found a home with Woodhall Press. Spencer was happy to share his thoughts on all of this with me, as well as hubris, failure, the influence of music and movies on his work and being taken seriously as an author.

Please tell me who you are and what we need to know about your book.

I'm just another writer living in San Francisco. My first book—How I'm Spending My Afterlife—is coming out September 7th from Woodhall Press. It's set mostly in Florida, where I spent a huge chunk of my life, and it's equal parts crime/caper story, character study, and dark comedy.

Now I need to know what we can expect from each of those parts. Or if you prefer, what are the elements of the story that make up those parts? Also, why these parts, what is it about a crime/caper, character study and dark comedy that appeals to you?

The basic framework of the story—guy who's not as smart as he thinks he is ruins his life via the application of hubris—is not a new one. But it's one that gets and holds our attention.

Well, the novel's inciting incident is the result of crimes that happened long before the narrative actually starts. So the extent to which it can be described as a "crime novel" might be debatable. It's really more about how Alton and Nicole, the two main characters, react to the repercussions of Alton's crimes, and how they can't help but sabotage themselves and generally trip themselves up with the questionable decisions they make throughout. I mean, the book opens with Alton staging his own death to escape prosecution—but then he sticks around town long enough to watch his own funeral. His decision to do this ends up being the ultimate act of self-sabotage, but he can't help himself, because he is exactly the kind of person who would need that sort of validation.

As far as what appeals to me about it, I've always found this kind of behavior fascinating—coming up with a high-stakes, half-baked plan, then winging it as the whole edifice gradually inevitably begins to waver and then finally topples over for good. The basic framework of the story—guy who's not as smart as he thinks he is ruins his life via the application of hubris—is not a new one. But it's one that gets and holds our attention. I know I've always been drawn to it in books and movies.

The idea that there are people who "can't help but sabotage themselves," always fascinates me. What do you think drives that kind of behavior (besides hubris of course)?

That's an excellent question. I think in a lot of cases, it's not hubris at all. I've known people who can't get out of their own way simply because they lack a solid grasp of how cause and effect tend to relate to each other. Others self-sabotage because they're not able to leave well enough alone, and they just can't bring themselves to let things work themselves out on their own. It's a very common part of the human experience, and I think most of us learn from it. But yeah, when you introduce hubris into the mix, you're basically smoking a cigarette at the filling station. Things are very likely to get a lot worse very quickly.

As I read the line, "Things are very likely to get a lot worse very quickly," I immediately thought about movies like A Simple Plan and Fargo, and then I wondered what your influences are, cinematically, but literary and musically, and anything really, as well.

Oh yeah, I'd definitely agree that a lot of my influences are from the world of film. I'm a huge fan of both of those movies—really, almost anything by the Coen brothers is going to be on the list of my creative influences. Some others I can think of off the top of my head: Reservoir Dogs, The Grifters, Glengarry Glen Ross—all these stories about desperate people trying to change their lives with one big score and coming up short. I'm not sure why, but that theme of failure seems to be something I'm drawn to.

With books, it's a bit different. I will read in almost any genre of fiction if the book itself looks interesting. The first book I remember wishing I'd written was The Hitchhiker's Guide to the Galaxy, and even though I don't write science fiction, I think that book has had a lasting influence on my approach to writing. When I was writing Afterlife, though, there were a few particular books whose influence I felt most strongly: The Tortilla Curtain by T.C. Boyle, Bad Marie by Marcy Dermansky, and then what I think is the best crime novel ever written, The Friends of Eddie Coyle by George V. Higgins.

As far as music goes, it's a big part of my writing process, but for the most part, those direct lines of influence are less clear to me. Except for one: Lou Reed's New York album. The songwriting on that record still kills me, thirty years after its release.

As soon as someone says, I don't know why, I have to ask why, and so why failure, why are you drawn to it? Full disclosure, I am as well.

I guess it's because failure is much more common in life than success, for all sorts of reasons, and watching someone fail can be equally revealing to watching them succeed. A lot of these narratives feature a central character who isn't succeeding in life in a way that matters to them—doing things by the book hasn't worked, so shortcuts and unconventional approaches become more appealing. Who hasn't felt that urge at one point or another?

As a debut author, short cuts and being unconventional may or may not have worked to get you where you are, though either way, you are a debut author. How did that happen and how did you go from being a working guy to a working guy and "just another writer living in San Francisco?"

I had always wanted to write fiction but worried I had nothing to say, or that if I tried to do it I'd never be able to pull it off convincingly. One day, I decided to stop worrying about all that. I had time on my hands—I was under-employed at the time—and the desire to write something. I started writing little flash fiction pieces, got a few published, and then just kept trying new and different formats. I ended up writing a complete draft of a novel over the course of three years, but I couldn't find an agent, so I originally brought it out myself. Now, some authors love self-publishing, but let's just say it wasn't for me. Still, I did it, sold some copies, and kept writing. It wasn't until I was trying to find a home for one of the books I've written since this one that Woodhall Press expressed an interest in Afterlife. I didn't even pitch it to them—I was trying to get them interested in a short story collection instead. But they liked the novel, offered me a contract, and here we are. 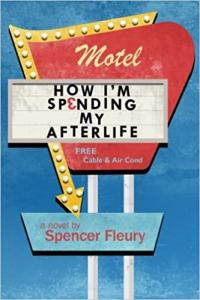 What was it about self-publishing that wasn't for you?

A lot of things, I think. It's a lot of work, and by that I mean a lot of work that isn't writing. Everything and anything that has to be done in order to bring your book out into the world and keep it selling, all of that is on you. I mean, I understand that pretty much all authors have responsibilities when it comes to promoting their own work, but that doesn't mean I want to handle distribution or develop a social media strategy or whatever. I'd much rather write.

Beyond that, though, I found the whole experience to be kind of isolating. It's just you out there, trying to tell people about your book and get them to take you seriously. And that is an issue, because there's still a stigma attached to self-publishing. It's not fair, because there are plenty of excellent authors out there who choose to self-publish. And the most successful ones seem to be writing in genres like romance and fantasy, which seem to have more of a community to them and which often—again, unfairly—aren't taken as seriously as other genres. The self-publishing model seems to work well enough for those genres, but it doesn't work for what I write.

You mention feeling isolated and community in your last answer, and given that you're now working with a publisher, have you found there is a community available to you and/or do you feel less isolated?

Yes, to a degree. I feel like more people are willing to take my work seriously, and take me seriously as an author, just because my book now has an imprint on the spine. There are, for example, publicists and book promotion companies who won't work with self-published authors but who are willing to work with me now, even though it's the same book. People still put a lot of trust in gatekeepers.

Which leads to my next question, given that "more people are willing to take my work seriously," what do you hope is next for you?

I have two more completed manuscripts, a novel and a short story collection, that I'm hoping to find homes for some time in the relatively near future. And I'm already a decent way into the first draft of my next novel. Obviously I have high hopes for all of these projects, but no matter what happens, I expect I'll just keep working my way through my master list of ideas, pounding away at the keys until something sticks.

And for a final question, is there anything you want to add that we overlooked?

Get How I'm Spending My Afterlife at Bookshop or Amazon

Get The Friends of Eddie Coyle at Bookshop or Amazon