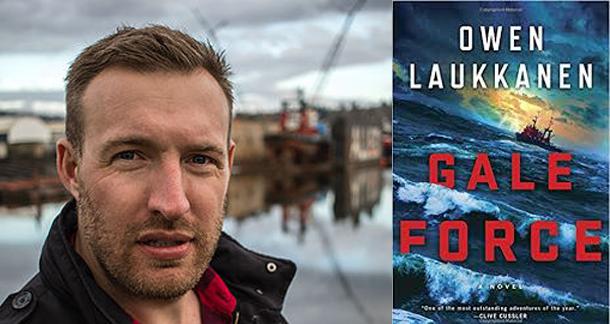 Who knew deep-sea salvage could be so fascinating?

It's a subject I knew absolutely nothing about, until I read Gale Force. Besides learning a lot about what happens when a big boat carrying a lot of stuff goes ass-up in the water, it becomes clear that this world is a very fertile setting for action-packed storytelling.

And that's exactly what Owen Laukkanen gives us in his story about McKenna Rhodes, a tug captain haunted by her dad's death who just came across a big score: a freighter carrying a load of new cars that founders two hundred miles out in a storm.

Here's the thing about deep-sea salvage—whoever successfully salvages the wreck and returns it to the owner get a percentage of the value of the shipment. So McKenna, who had been scraping by, is suddenly looking at a multi-million dollar payday. Problem is, some other folks want that money, too.

Oh, and that foundered freighter? It's crew includes a man on the run carrying fifty million dollars in stolen bearer bonds. Which the Yakuza wants back.

Gale Force is one of those books I found myself sneaking in a chapter here and there, just to find out what would happen next. Owen, as usual, kills it, though I was most taken by how he balances the world-building and the readability, which is a tough line to walk. So we talked a bit about it here, along with writing outside his series and what he's got coming next.

I was reading Gale Force at the same time as I was catching up on The Terror on AMC, which is a fictionalized account of the doomed Franklin Expedition to map a Northwest Passage in the 1800s. What is it that's so compelling about these high-seas stories—especially when they're set in that part of the world?

As a writer, fishing is a wonderful occupation because it’s so different from sitting with your laptop in your house. You’re out in nature, you’re working with your hands, and fishermen have the most incredible stories to tell...

That’s a good question. I think what appeals to me about maritime stories, partly, is the fact that the high seas are and always have been a lawless frontier where the threat of danger is immediate and omnipresent. You’re so isolated on the water, and at the mercy of very powerful forces of nature and also whomever you’re sailing with, so the potential for conflict and action is always there. It’s just such a different environment from anything any of us is really used to, in particular in really remote places like the Aleutian Islands or the Arctic Ocean, where the weather is very much a character all its own, and where even making landfall is no guarantee at all of survival. To me, as a writer, there’s just so much you can do with an environment like that, and as a reader, I love being taken there, too.

In the acknowledgements you talk about spending time on boats as research. Can you tell us a little about that?

I grew up in a family of fishermen; it’s kind of a cliché, but the sea is in our blood on my dad’s side and we’ve always felt a kinship with it. My dad’s grandfather was a commercial fisherman and a boat-builder, his brother, too, and even as a doctor my dad devotes two months of the year to fishing commercially for lobster. So I grew up on the water and near the water, and as a teenager and in my twenties I worked summers on both my uncle’s boat on the Pacific coast, and my dad’s boat on the Atlantic. I absolutely loved it; as a writer, fishing is a wonderful occupation because it’s so different from sitting with your laptop in your house. You’re out in nature, you’re working with your hands, and fishermen have the most incredible stories to tell when they’re all tied up at the dock on a storm day. I’m colorblind, so I could never get my captain’s ticket, but I would have loved to have gone to work on the sea.

Also in terms of research: there is a ton of information here, about boating and salvage and tugs, never so much that it bogs down the reader (which is a fine line to walk), but enough to really create a rich and interesting world. How do you find that balance? And how do you think this would hold up if read by an actual tug captain with experience in salvage operations?

I hope the story would hold up well! The wreck at the center of the tale is based on the real-life saga of the Cougar Ace, which did in fact capsize near the Aleutian Islands and had to be salvaged, so hopefully that basis in fact starts me off on the right foot. I tried to stay pretty true to the industry, though I think as thriller writers, like you say, we can get distracted trying to show off the scope of our knowledge and hurt the story in the process. My position on building a world like the maritime industry in Gale Force is to lean on salient details that will provide flavor, but to try and keep the story humming as quickly as possible. Having a good editor definitely helps!

The large part of your body of work is the Stevens and Windermere series, but you've also written two YA novels and, now, a standalone thriller (unless you're planning on bringing McKenna back, which I endorse...) But, how does it feel to wear different writing hats, especially after having established the voice and flow of a series?

First of all, I really, really hope to bring McKenna and the Gale Force back for more books. I guess we’ll see how the sales look after the first book, but I have at least four more stories I want to tell with that crew!

But I think it’s really liberating to switch up your flow once in a while. I’ve found writing the Stevens and Windermere series really rewarding, and I’ve had a lot of latitude in writing it to tackle the subjects that interest me, but at the end of the day you are writing to meet a certain set of expectations when you do a series, and it can be really fun and refreshing to try something else every now and then.

The YA books, in particular, I wrote entirely for my own amusement, and it shows. You can be a lot more stylistically daring and obnoxious writing for teens than writing a commercial thriller, and I really enjoyed getting to let my hair down and take a few more chances.

I think the most rewarding stuff I’ve ever written has been stuff I’ve written for me, first, with no market expectations or plan beyond writing a good story and seeing what I can do with it. Gale Force certainly falls into that camp.

To be perfectly honest, I was a little surprised you wrote a book set on a boat, considering how much of your Instagram feed is pictures of trains. So... when are we getting a train book?

Ha! I mean, The Forgotten Girls, my sixth Stevens and Windermere novel, is about a serial killer who rides freight trains in the Montana wilderness. So I got my train fix in a little bit with that one. But I think that it all comes down to a good story. I love ships and the ocean almost as much as I love trains, but to me there’s a lot more drama and tension inherent in a sinking ship hundreds of miles out at sea than there is aboard a train, no matter how much I love them.

I am sure there will be more trains featured prominently in my work! But I think there’s a reason that maritime adventure stories have a long literary tradition, and train books are more of a niche market.

AND you've got another book (and sequel) coming out from Mulholland, a series featuring a rescue dog. Can you tell us a bit about that, and, your output is pretty robust. What are your writing habits like?

Yeah, the Lucy book (right now we’re calling it Deception Cove) is another one of those books that I wrote because I wanted to write a good story and to hell with the market. I had kind of fallen out of love with writing a little bit last year, but I had this idea about a rescue dog who gets trained by a prison inmate in one of those compassion programs like Dawgs in Prison, and who is then assigned to a Marine who’s just come home from overseas with PTSD. The Marine gets into a bind, the dog gets taken from her, and after the prisoner finishes his sentence, he catches wind that the dog’s in trouble and goes to see if he can help.

It’s kind of like a Jack Reacher novel with a rescue dog, except that the damsel in distress is a combat-decorated Marine and the guy who fancies himself Reacher has been in jail most of his adult life and needs as much help as she does. I’m really excited about it, and excited to hit the road next summer with my own Lucy to promote the book and the sequel.

My writing habits have kind of slacked in the last little while. I used to write five thousand words a day, five days a week, and just churn out material, but lately I’ve cut back to about a thousand or two thousand words a day. Regardless of word count, I find I’m most effective when I treat writing like a job and keep to a steady routine, and I try to always have a few irons in the fire.

Anything else coming up that you're excited about?

I just started blogging, which I’m super excited about. I had a pretty tumultuous year with a bad breakup and some serious depression, and so Lucy and I gave up our apartment in Vancouver and packed up my truck and basically just hit the road; we drove nearly five thousand miles across the country in January and we’re doing the same to promote Gale Force in May, so I thought I would keep a blog to document it all. While I’ve been traveling I’ve been making a concerted effort to change my lifestyle, both physically and mentally, and I’m really hoping this blog— Project Nomad —will not only hold me accountable but also contribute to the larger discussion about mental health and wellbeing. So far, I’m finding it very fun and rewarding!