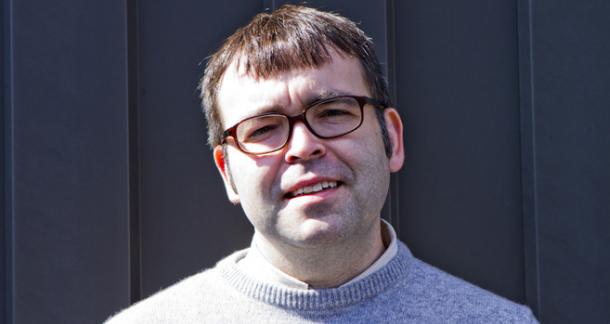 Owen King first came onto the scene with his 2005 collection, We’re All in This Together. He released his first novel, Double Feature, eight years later, but he wouldn’t embrace the genre his father so successfully mastered until his 2015 graphic novel, Intro to Alien Invasion. I’ve always been a fan of Owen’s work. His ability to blend humor and heart remains impressive with each new work published. Today his new novel, Sleeping Beauties, hits the shelves, a massive horror epic penned with his father. Owen was kind enough to answer a few questions for us.

Intro to Alien Invasion is the perfect graphic novel for any kid who was obsessed with sci-fi and horror b-movies. What did you grow up watching and reading? Any plans for future work with a similar tone?

I read around when I was a kid. I loved The Hobbit and The Hitchhiker's Guide to the Galaxy, but also novels like A Prayer For Owen Meany that take place in a generally realistic world. When I was a teenager I, Claudius by Robert Graves was a transcendent reading experience. Flannery O'Connor's short stories, which I read around the same time, also blew my mind. If there's a wire that runs all the way through, it's probably that I'm generally not too enthusiastic about anything that's not at least a little funny.

For me, tone is hard to predict. It evolves with the characters and the story and eventually you sort of lock in. So, I could imagine writing another book or graphic novel with some combination of comedy and science fiction, but I feel like I wouldn't know until it was happening.

Tone is hard to predict. It evolves with the characters and the story and eventually you sort of lock in.

Sleeping Beauties was your idea initially, correct? And you brought it to your dad? What made you decide to seek collaboration? Why was this different from previous writing projects?

I had a one sentence pitch — "What if one day all the women in the world didn't wake up," or something like that — but I just chucked it at him for fun. I wasn't planning on writing it. He was so enthusiastic about the notion, though, I gave him my blessing to take it on himself, but he didn't want to. Long story short, we settled on a collaboration.

Part of what makes this book so different for me is that, up to this point, I've only dabbled in fiction that could be described as "fantastic." When we started I didn't know if I could write a big novel that had these supernatural components, if I could maintain the pace, keep inventing and building on the conceit. It was a big thrill to stretch myself in a new direction. And, obviously, it didn't hurt that my collaborator was someone with experience in the field.

What was the collaboration process like, writing a novel with your father?

We worked over email, taking turns with chapters, keeping to the partial outline as much as possible, while at the same time continuously adding on to it, moving closer to the ending. Within our particular sections we always left the other writer a gap to fill in — i.e. "Please write this scene with these characters into this spot." We also rewrote each other. The result, hopefully, is that the book really has its own voice.

I read that you’re in the process of adapting Clive Barker’s The Great and Secret Show for television with Josh Boone? How’s that going? Anything you can discuss?

I don't have any fresh news here. Josh has been off making The New Mutants. (It looks awesome, by the way.) I can tell you that we feel good about the two episodes that we've written, and while we know it's a big undertaking, we're committed to getting it done.

I once heard in an interview with your dad that, during the process of writing Gerald’s Game, he tied you to a bed and asked you to attempt to break free. Is that true? Can you remember any other similar “research” from your childhood?

I have never heard this story before! It is not true. I don't believe I've ever been a research subject for my dad. However, I did contribute a handwriting sample that was used in one of The Dark Tower novels.

Thanks for the time, Owen! I’m still convinced your dad talked about doing this (maybe to your brother, instead) at one point during an interview I watched a few years ago, but of course I can’t locate it now. It’s always possible I dreamed it. I guess sometimes I’m a sleeping beauty like that. Owen? … Owen? … Are you still there? Owen! I’m sorry. OWEN.