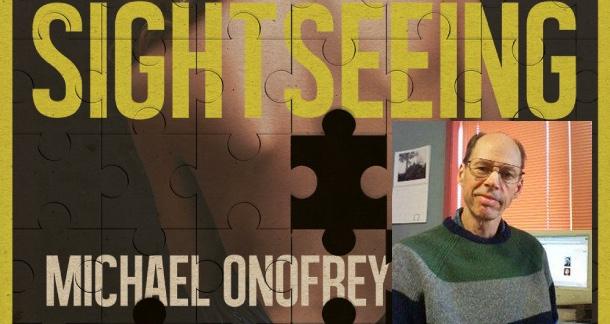 We at CLASH are excited to publish Michael Onofrey’s second book, Sightseeing. It’s a new wave noir novella with Lynchian vibes that takes place in Paris. Like the book, Michael is a bit of a mystery. He has travelled the world and lives in Japan, but is very low key on social media. His writing says so much and he seems content to let it do most of the talking. This book is a deep dive into a world of art. It is an exploration of self and meaning. It’s like walking inside the great masterpieces at the Musee D’Orsay while trapped in a film noir with a beautiful and unfathomable woman. Here is what he had to say about it.

This is your second published novel. How did the writing process differ from your first?

In the first book, Bewilderment, two stories operate, one in Los Angeles, the other amidst the Indian subcontinent (India and then Pakistan), a back-and-forth structure, so there was a lot of ground covered in terms of scenes, and in a similar fashion a lot of time was covered, years and years. Sightseeing takes place in one city and its time span is about twenty-four hours. I don’t think the writing process had much to do with first published book versus second published book. It was a matter of story, one story calling for a certain process, the other story a different process.

What is the link between the art pieces you chose to highlight as postcards and explore in the landscape of the narrative?

Art has all these different discernments and callings, and so do people.

The narrative in Sightseeing is a play between realism and fantasy, and where one ends and the other begins is a quandary that weaves throughout the book. The art pieces are real. The characters are real. But then the characters, particularly Diane, put the art pieces in play, which creates an oscillating picture—art representing life, and life imitating art. Art has all these different discernments and callings, and so do people.

If Sightseeing was to be optioned, who would you want to direct the film and what actors would you like in the two main roles?

Direct the film? How about fellow CLASHmate, Daniel Knauf? Cinema and poetry. Other names that come to mind: Michelangelo Antonioni (Blowup) and Jean-Luc Godard. But they’re deceased. Female lead: Anna Karina. But she might be a little old for the part now. Male lead: I have no idea. Actually, I know very little about movies. I haven’t been to a movie theater in 20 years.

You’ve clearly been to Paris and you live Japan. What are some other favorite places you have traveled?

Who are some of your recent literary references? What was the last book you read that you loved?

Setting is such an important aspect of Sightseeing. Do you have a place or a setting where you like to write?

I write with a keyboard and a monitor that are on a table in a room that has windows and is spacious enough to where my wife has the same setup for herself. There are bookshelves. For the most part, it’s a quiet neighborhood we live in. When a typhoon hits, though, it isn’t quiet.

What advice would you give to writers looking to publish their first book?

It can be tough finding a publisher or an agent. Even writers who are now super famous had problems getting their work published. Lolita by Nabokov, for example, was turned down by four American publishers. He sent it to France and Olympia Press picked it up. Others who found a home at Olympia include: Jean Genet, Henry Miller, Samuel Beckett, William S. Burroughs, Lawrence Durrell, Gregory Corso. This brings up an interesting question: What would an Olympia Press or its big sister Obelisk Press or its U.S. version Grove Press look like today if it were just starting out?

Do you have a favorite bookstore in Japan?

No. Perhaps if I lived in Tokyo there’d be a favorite bookstore. But I live far from Tokyo. I live in a small town by the sea. There are nearby rice fields that are alive at night with a chorus of frogs right now, fields getting flooded, rice shoots going in.

Finally, do you have anything new you are working now?