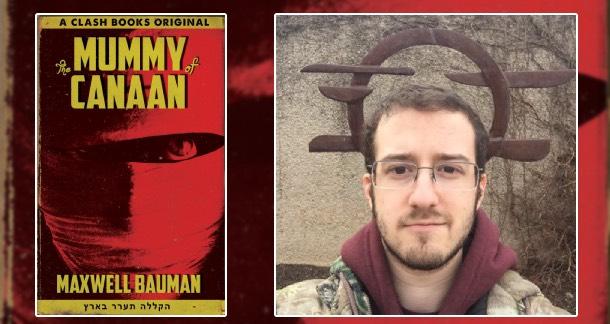 I met Maxwell Bauman in a writing class at Wilkes University. He had a big Jewfro and we bonded over writing weird things and having quirky Jewish mothers. I told him that I had this idea for a book about a Satanic Bat Mitzpha titled Baphomitzvah, and three years later he wrote that idea as a novelette, as well as a bunch of other cool Jewish horror stories. A lot of them were really funny but for Maxwell's latest book, about a mummy woken up by Birthright kids visiting Israel, he went darker and gorier—and it's the best thing he's ever done. I don't know of any current writer specializing in Jewish Horror, so here is a conversation with the millennial king of Jewish Horror, Maxwell Bauman.

Was being raised by a Jewish mother a good way to learn about dread and anxiety so you could write a gut-wrenching horror novella?

I'll give you a little secret. The real source of guilt isn't Jewish mothers, it all comes from Jewish grandmothers. And it wasn't just mine causing stress; I swear all these old ladies are cut from the same cloth. Nothing is ever good enough. Every meal gets sent back. You never call, you never write. But at the end of the day, I'd rather channel that energy into my writing instead of a hernia.

How much do you think you've grown as a writer between The Anarchist Kosher Cookbook and this debut horror novella, The Mummy of Canaan? 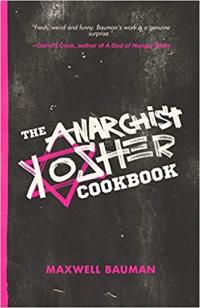 The Anarchist Kosher Cookbook was always meant to be fun and silly. It's a collection of humor/ horror stories, but the comedy aspect took the reins. I must have written something like 15 stories and only 6 got into the final version. Those were the best of the best. Each had its own energy, and it wasn't easy to juggle all those different ideas. But when it comes to The Mummy of Canaan, I was able to focus in on one idea and really take the time to develop it. Since I wasn't going for laughs, and since it's a novella, I was able to slow down and build up the tension to give the violence and gore a real impact.

For those of you who don't know, "Birthright" is a free trip to Israel to get young (mostly American) Jews to visit the holy land, learn about their culture, and meet new people. It sounds like fun, but I passed over this trip. Why? Because every time I even considered going to Israel something would come up with one of her many, many enemies. That's not a vacation. Granted, the chaos always calms down after a few weeks, but I can get all the stress I need from Jewish grandmothers here without having to worry about rockets flying overhead. That said, I have a feeling that some cosmic force still wants me to go on Birthright because they keep raising the age cutoff. It was 26, now it's 32. Just you watch, when I hit 32, they'll raise it again to 40.

Who are some young and new horror authors like yourself that you enjoy?

I really love Mame Bougouma Diene's writing style. His book Dark Moons Rising on a Starless Night, which is four short novellas, is an amazing work of African horror. There's some body horror and evil spirits, and also nuns channeling a True Detective vibe. I've gotten to read some of his short stories too, and I'm really excited to see what he does next!

What is some advice you have for new authors trying to get their work published?

Keep an excel spreadsheet of every place you submit. Include the name of the piece, the name of the publication, the email or portal that you send the work to, the date sent, any submission costs, and any specific notes on when you'll expect an answer. Rule of thumb, if they don't say when you'll hear back and there hasn't been a response in in 3-4 months, the answer is no. It's far too easy to get tripped up sending out stories to so many places.

What is your favorite and least favorite horror film?

The Woman in Black 2 (2014). It's 80% predicable jump scares, 20% don't cares. (Aww, snap!) The special thing about the first movie was that the visual horror didn't line up with the music. That disjointed feeling made the scary moments really pop. But whoever was in charge of the sequel missed the point entirely.

Dishonorable mention: There's a scene in IT (2017), where Bill finds a LEGO turtle in his brother's room. Got to call out the props department on this screw up because the film is set in the 1980's, but it used colors and pieces that wouldn't exist for another 30 years. Took me right out of the movie.

Salò or 120 Days of Sodom (1975). Another movie that gets under my skin, a retelling of the book by the Marquis de Sade. The movie shifts the setting from 18th century France to fascist Italy near the end of WWII. A group of powerful people select a group of beautiful teens to screw and torture. There's a part where a girl gets fed a piece of bread with nails hidden inside, she screams, and the rich people have a good laugh. That's one of the lighter moments. Fascism is terrifying, and for 2 hours we get to see the worst of humanity in all its visceral gory glory. Not for the faint of heart.

Honorable mention: There's a scene in Black Swan (2010) where the mom is angrily trimming Natalie Portman's nails. The cuts between shots get faster and faster, which only makes the whole ordeal more terrifying. That scene made me squirm, but in a good way.

You really love LEGO. Please give a genuine, but moderately pretentious answer on how building with LEGO is like building a story?

Did my last answer geeking out about the wrong era of LEGOS in IT give that away? Haha. You must think of your story as a bin of unsorted pieces. Yes, yes. It's all there waiting for you to put it together. Sure, you can skim off the top of the pile, but if you want something good, something special, you need you dig down into the bin. Go deep into the unknown, past the sharp edges that scape your knuckles, ignoring the sticky stuff. Oh shit, did something just move? Ignore it, keep going until you find that one piece hiding all the way at the bottom that brings it all together.

Last question, who wins in a fight: Jewish mother who does weekly pilates or a mummy at full power?

A modern Jewish mother, weekly pilates and all, is still getting her face eaten off by a mummy. No doubt. But a Jewish grandmother will guilt the mummy back into his sarcophagus with bold accusations that he never calls or writes.

Great interview. I bought two books because of it!