Interview by Gabino Iglesias August 4, 2021
In: 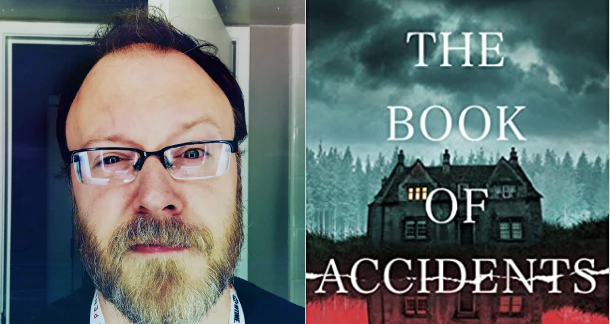 He's a bestselling author. He's a guy on Twitter. He lives under your bed. Chuck Wendig is many things, and the fact that he has a great sense of humor makes it easy to joke about those things. But besides being a superb storyteller with an outstanding new novel, Wendig is one of the good ones; a man who blurbs a ton of books, shares his knowledge about publishing with upcoming writers, and keeps readers happy. I recently read The Book of Accidents, and wanted to know more about the process behind it, so I sent Wendig some questions. He's what he had to say.

Interviews are weird, but you have a new book out, The Book of Accidents, so tell us: What's Chuck Wendig's biggest fear when putting a book out into the world?

I guess that nobody will care? I always say that writing is an exhortation against not just loneliness but being truly alone—it’s a yawp into the void that you hope will be answered. Like echolation, an echo out, an echo back. You pull a story out of your own messy weird heart and you put it on a plate and you do this as an act of faith. Faith that someone else out there is like you. That they want a bite of your heart, that they want to listen to your song. So I guess the fear is that nobody will care, and that the storyteller—me, in this case—is well and truly alone. I don’t think it’s true. But one worries.

On a more serious note, I loved The Book of Accidents. It packs a lot of elements as well as a few emotional punches and a hell of a crazy, immersive story. What was your process like while putting it together? Did you ever think the magic stuff was pulling you away from horror?

Thank you! I feel like the magic in the book is… fraught, and complicated, and is more than it appears (or, perhaps, less than it appears). And as a thread of the book’s supernatural fabric, I think it still serves to create and highlight horror rather than diminish it. Because the magic in this place costs something. It extracts a price. It’s not wish-fulfillment. It’s fairy-tale-teeth-on-a-platter, body-on-an-altar horror.

I love when an author can drop a scathing critique without sounding preachy, and you do that a few times in The Book of Accidents. Did that emerge in the character development stage or was it an idea you had from the start and found intelligent ways to make happen within the narrative?

Oh! Haha, I’m not even sure what the hell I scathingly critiqued. For the most part I don’t ever want a book to feel or sound preachy, but I also am comfortable with a story being a product of the author. Meaning, all the STUFF that goes on inside me (anxieties and anger and their opposites, too) is okay if it goes in the book, as long as it feels like an organic part of that narrative and not, say, a manifesto.

You've published many books, but each one is special. The Book of Accidents seems like the book that makes you a horror star, even more so than Wanderers did. What appeals to you about the genre?

It’s funny, because most of my books are ostensibly horror. Miriam Black can see how you’re going to die by touching you, and the books are grim and gory and full of scares. Zeroes has body-hacking horror; Invasive has ants that literally leaf-cut your skin off your body. Wanderers is about the end of the world. But, horror has been kind of anathema, and it’s only writers like Stephen Graham Jones or Paul Tremblay or Ursula Vernon or Grady Hendrix who have, I think, really helped drag it back to… I don’t want to say respectfulness, because it’s always been a damn fine genre. But Big Publishing has weird ideas about things, often wrong ideas. And it needed to be reminded of that. So I’m glad I get to join the party, finally, and put the actual label on the book.

As for what appeals to me about horror? I find horror quite comforting. I think it’s an excellent place to contextualize our fears and worries, to let our anxieties do Thunderdome battle in the arena of the book. I liken it to a sorcerer summoning demons into a summoning circle—a safe place, a prison, by which to ask them questions and force them to yield. Horror novels are that summoning circle.

What are two other Chuck Wendigs doing in parallel dimensions? What do they do for a living?

I like to imagine photographer and chef, but they’re both probably like, middle managers or some nasty shit. Fuck those other Chuck Wendigs.

You have a solid online presence and your use of social media is great, but the hate is always there. How do you cope with that? What would you tell upcoming writers about dealing with negativity online?

At a certain level, quite honestly, it gets very hard. I can give a talk here about well, you gotta toughen up, care bear, and shore up your filters and curate your own experience, and all that can be true to some degree, but the reality is, you’re hanging your heart on a hook and hoping everyone is going to be nice to it, and many are not going to be nice to it. Sometimes they don’t mean to be cruel, but just as many definitely, definitely do. Some just wanna hit it with a bat, pinata-style. And as you get bigger with a bigger audience, I find that people begin to view you less like a human being and more like an idea, or an object, and in that dehumanization, cruelty gets more casual.

And it kinda sucks. For me, it’s mostly about trying to remain positive and see the good side of things and not let the bad stuff wash away all the sand on your beach. But I also have begun to question the value of social media for writers, and if we’re giving away too much of ourselves there, too much of our hearts and minds. I think if the negativity is too much, it’s okay to get away from social media, whether in brief or in total. You don’t need to pickle yourself in other people’s bile.

Speaking of dark things...mines. Man, I've been reading about the lives of miners. Long days. No light. Constant danger. Black lung. What was it about mines that made you work them into The Book of Accidents? What was the research for that like?

FUCKING MINES. My grandfather was a coal miner (I’d always been told he died of black lung, but the truth was that he died of bowel cancer – and I think the family always said black lung because it sounds cooler and tougher rather than, “his ass went bad and killed him.”). So, I’ve always found it somewhat haunting, the idea of going down into the dark. And I’ve gone down into some mines—some really deep ones, too, silver mines out west, oof—and they’re pretty much horror-fed spaces.

I remember the title for this book came from seeing an actual mining book of accidents somewhere—I feel like maybe it was at a coal mine museum in upstate PA?—and it struck me how all these accidents (cave-ins, gas pockets, lost limbs) were technically accidents but also, weren’t. You throw a bunch of desperate men down into the dark with little support and meager light and shit’s bound to get bad. There are accidents and then there are “accidents.” Which, I suppose, is part of the point of the book. 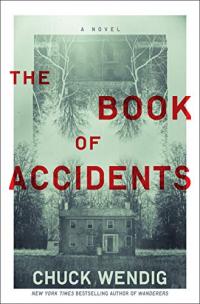 And on that research note...what other research did you need in order to create alternate dimensions without doing the overly elaborate sci-fi math/physics montage?

Really, not much? This not being really very sci-fi, it’s easy to imagine separate worlds as part of horror, as part of the fear factor: a series of other worlds, off-kilter from this one, each increasingly strange, where the YOUs of that place are failures or abusers? Where they are victims or monsters? It’s pretty fucked up.

I love horror and there’s a natural extension there to being interested in true crime – and part of the serial killer stuff in the book is based on an actual murder that happened close to my house when I was a Wee Baby of, I think, a year or two old. A girl was disemboweled and left on Buckingham Mountain where I lived and it’s still an unsolved case (though everyone is pretty sure her uncle did it). It was grisly and left a big fingerprint on the area in which I grew up. It’s less that I think in this case the killer is interesting and more it’s just… the desperate desire to understand how this sort of thing can even happen. It feels so raw, so ragged, so terrible you just wanna understand it.

And also you look at some serial killers and you see—though clearly what they did was never, ever justified—these are monsters who were often created by other monsters. Abuse and molestation and such. Monsters begetting monsters begetting monsters. Which, again, is a core component of the book, I guess. Cycles of abuse and trauma. Can they be broken? That’s what the book asks and tries to answer.

The last question is always "What are you working on now?" but I will let folks find that out on social media. Instead, I'll ask you two easy questions:

1- Give us the top three reasons why folks should X out of this page and go grab a copy of The Books of Accidents:

1. Opens with a George Carlin quote, c’mon.
2. Because you’re not supposed to write prologues anymore and in response I put TWO prologues in the book ah-ah-ah (says The Count from Sesame Street).
3. I think this book puts people through the wringer but I also think it makes them feel better, afterward, and in this day and age, that’s not nothing.

2- Care to share five books you've read recently that you think readers should check out?

1. Four Lost Cities by Annalee Newitz
2. Mine by Delilah S. Dawson
3. The Annual Migration of Clouds by Premee Mohamed
4. The All-Consuming World by Cassandra Khaw
5. Road of Bones by Christopher Golden

Get The Book of Accidents at Bookshop or Amazon

The Dark Stories Dark Writers Tell in the Dark