Interview by Leza Cantoral December 4, 2019
In: 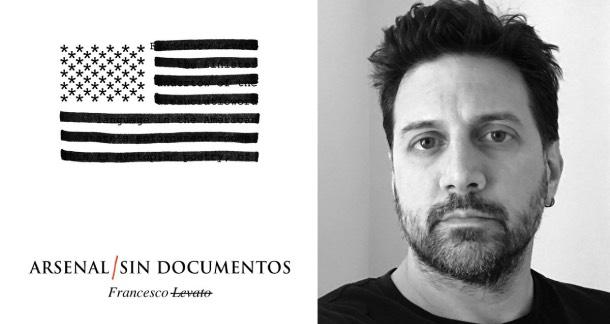 Francesco Levato is the kind of artist that is fully involved on all levels with his art, and his art is intertwined with his own heritage and his political conscience. His poetry collection, Arsenal/Sin Documentos (CLASH Books), is as much a piece of visual and lyrical art as it is a political act in itself. It is activism in motion.

In this collection, Francesco explores the criminalization of Latin American bodies through U.S. policy. It consists of a series of linked documentary poems composed of appropriated language from U.S. government documents, such as: the Immigration and Nationality Act; the U.S. patent for Taser hand-held stun guns; materials from the Office of English Language Programs designed to instruct immigrants on assimilation into U.S. culture; and the U.S. Customs and Border Protection’s Use of Force Policy, Guidelines and Procedures Handbook.

I was interested in Francesco’s cultural background and heritage as well as his process for creating these powerful eye-opening erasure poems. As with his work, his process has many layers.

The book is a collection of erasures and documentary poems that examines the harsh truth of being other in a society created through and dominated by colonial impulses. It excavates language buried in seemingly banal institutional texts and redeploys that language against the State; laying bare the asymmetries of power in a system that simultaneously criminalizes the other, while relying on the other’s labor to maintain its privileged position.

Being from Mexico, the subject of this book is clearly personal. How are these erasure poems personal for you?

I am a child of immigrants and grew up in a family of working poor where food and housing insecurity were not only an aspect of everyday life, but also a defining factor of who I would become. These intersecting spheres of otherness taught me that power operates differently for those occupying a position outside of the dominant culture, and that for me survival necessitated resistance. Part of that resistance has been documenting the material consequences of the exercise of power against the powerless; a practice I situate in the tradition of poetry of witness and investigative or documentary poetics.

My current project is exploring documentary poetry in virtual reality using a videogame development platform; including an Oculus Rift VR kit and a 3D scanner to bring real world objects into the videogame.

When did you first encounter the art form of erasure poetry?

I’m not quite sure, but I have been working with found language, a technique at the heart of erasure, since my long poem “War Rug,” a work of documentary poetics focusing on the U.S. wars in Iraq and Afghanistan.

Who are poets that have most influenced your work?

Adrienne Rich, Murial Rukyser, Carolyn Forche, C.D. Wright, Charles Reznikoff, Mark Nowak, and Julianna Spahr, to name a very few. Adrienne Rich’s reflections on the intersection of poetry and politics have been particularly influential on my work, so much so that I tattooed the epigraph of her book What is Found There on my arm. The epigraph is a stanza from “Asphodel, That Greeny Flower” by William Carlos Williams, that reads “It is difficult / to get the news from poems / yet men die miserably every day / for lack / of what is found there.”

I’m not sure how to answer that, as I move between text and media as the work requires. The poet Kimiko Hahn, when explaining the Japanese form zuihitsu, said it translates roughly as “following the impulse of the brush.” And poetry scholar Marjorie Perloff has described texts that exist simultaneously as a constellation of multiple genres and media as differential texts with no single version of the work being definitive. These concepts have always resonated with me and I think they embody both my work and my practice.

Working in the world of academia do you find that it has opened doors of communication for you or are there limitations of expression within the constraints of that milieu?

My experience in academia has been one of opened opportunities for my work, especially with regard to multimedia. California State University San Marcos and my department, Literature and Writing Studies, are very supportive of both critical and creative work. Through professional development support I have been able to afford equipment that allows me to experiment in ways I would not have been able to before. For example, my current project is exploring documentary poetry in virtual reality using a videogame development platform; including an Oculus Rift VR kit and a 3D scanner to bring real world objects into the videogame.

Tell me about your childhood, where you grew up, what were the landscapes that inspired your imagination?

I grew up in poverty and domestic violence, and as my family couldn’t consistently pay rent, we were forced to move every year. The instability and constant threat made me focus more internally than externally, and more on fantasy than reality. So, for me the landscapes that were most important were those of the worlds I could escape to while playing Dungeons & Dragons. I would lose myself in the world building aspect of D&D campaigns and wanted badly to write fantasy or science fiction as a result.

How did your interest in the occult begin & how does it influence your daily practices?

I was fascinated as a kid by shows like In Search Of and anything related to the paranormal and the occult. All the books I checked out of the library had something to do with these themes; like ghosts, cryptozoology, witchcraft, and demonology. What surprises me to this day is that I was able to check these kinds of books out from my middle school library. One title I remember specifically was Encyclopedia Of Witchcraft & Demonology by Russell H. Robbins, which when I was old enough to drive led me to discover the Occult Bookstore in Chicago, where I purchased my own copy. That store blew my mind. It opened me up to the tarot, rune stones, crystal magic, amulets, ritual magic, and incense and herbalism. This is what I still practice. I regularly make incenses, by hand, for centering, health, and creativity—which my wife and I burn when we are working on our writing projects.

That’s fascinating! I would love to hear more about how your magical and writing practice entwine. What centering habits would you recommend to other writers trying to clear that headspace for a new project?

For me, the act of making incense, the physical grinding and blending of ingredients, is meditative in itself. It allows me to step away from the screen and other distractions, and focus internally. It’s something I have difficulty doing as I’m a Taurus and tend to be fairly stubborn and driven, more likely to try to plow on ahead rather than give myself permission to pause. I think it’s the materiality of my practice (the dust of raw Dragon’s Blood coating my fingers, the stickiness of liquid resin binding the incense) that brings me to ground when outside influences whip me into distraction. Each of us have such differing needs and circumstances. I don’t feel I could speak to what practice might work for others, but I can say that mine emerged from aspects of my life that I thought separate from my writing, and that I now find to be integral.

My current project is a documentary poetics informed, videogame/VR art installation that examines immigrant detention at the border. It’s still a work in progress, but the game mechanics I’m considering will involve users interacting with objects that are representative of the for-profit immigrant detention process. Each object interacted with will have a set of texts associated with its role in the detention process, and each user interaction will collect these texts and compile them as a textual form of witness.

Mini-Interviews with the 'Tragedy Queens' Authors