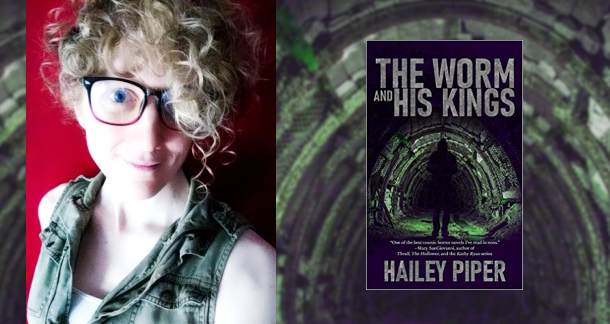 Hailey Piper’s new novella, The Worm and His Kings, takes cosmic horror to subterranean levels of nightmarish multitude. An oppressive worm cult occupies the deceptive tunnel circuitry beneath NYC, relying on their Skeksi-esque henchmen to abduct the vulnerable and curious in order to play out their deadly celestial drama. I caught up with Hailey to discuss the book, Manhattan’s “mole-people,” the problematic shadows of Lovecraft, while dissecting the anatomy of our fight/flight instincts.

As wild as the plot and characters are in The Worm and His Kings, some may be surprised to learn that there's some truth to this underground world beneath New York City. It instantly made me recall the documentary Dark Days about the NYC “mole people” — even Freedom Tunnel is the real name of their main thoroughfare. But your book is so brilliantly vivid with a blueprint of the speculative layout if not the actual subterranean architecture. Did your imagination just take off from this common knowledge or have you ever ventured down there?

I’ve been to New York City many times, but I’ve always stuck to the more pedestrian routes and probably have spent more time with friends in Queens than Manhattan. One friend got to talking about the underground years back, and that stuck with me. Freedom Tunnel’s layout in the novella follows some of its genuine architecture and considers the nearby areas, though after that the book becomes more imaginative—hopefully. If there’s an actual ancient city beneath Manhattan, I’ve thankfully never seen it.

Since you've literally turned cosmic horror upside-down in this book, what originally attracted you to the sub-genre? Did you feel the need to flip the script considering Lovecraft's long casting shadows of racism/xenophobia? 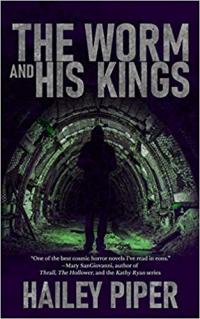 Strangely, I haven’t written much cosmic horror. I think maybe two of my published short stories dip into it to date? But I love reading it, with plenty of favorite stories by Caitlin R. Kiernan, Brian Hodge, Ramsey Campbell, to name very few. I adore the imagination and concepts, and in post-Lovecraft authors, the presence of genuine, deep characters. I think other authors have tackled his shadow more head on, such as Victor LaValle’s The Ballad of Black Tom (also a NYC-based novella) or “The Peddler’s Tale, or Isobel’s Revenge” by Caitlin R. Kiernan.

For me, horror is healing, and my approach tries to value empathy. Flipping the script wasn’t a conscious intent, but I think that, as a queer woman, my outlook is so fundamentally different from his that opposition couldn’t be helped. He feared the other; I am the other. Our approaches just aren’t compatible.

Cosmic horror is often interpreted as an exploration of existential dread – branding nature and the cosmos as an amoral force that pummels the human species regardless of their good intentions. Did you set out to offer concrete definitions of good and evil in TWaHK, or is it all more transcendent like the worm cult leads us to believe – which seems its own deception, to get away with more dominance.

When it comes to the Worm, we’re left with largely human perspectives and little else besides evidence of past action. Some characters see good, others a potential advantage, others belonging, and still others see dangerous power. I think measurements of cosmic good and evil are difficult because the stars are going to form, burn, and eventually die, and so much happens in that span of time. The best presentation I can give is Corene’s, that healing and harm are a matter of perspective, not always good or evil but part of a powerful cycle.

You packed so much history, science, and speculative legend into such a brief 114-page novella – including the Pangaea supercontinent theory. Do you see this book as a sort of “urban Gaia” concept? Why New York as the portal to the yoke of this oppressive, deadly underworld?

There’s certainly a synergy between the underground and the city, whether that’s New York or another. Monique falls through the cracks of our society as a marginalized person, and she’s certainly not the first or last. Without those cracks, and the people who fall through them, the Worm cult cannot function at strength. Those cracks extend to the Worm’s lore as well, and what passes through in the very depths thanks to cosmic unconcern. It didn’t have to be New York, but being from New York State, the city always felt like a special place, draped in horror movie legacy from King Kong and The Beast from 20,000 Fathoms to C.H.U.D. and Gremlins 2. On that level, this choice of city in The Worm and His Kings feels inevitable on a personal level.

While sometimes a monster is just a monster in a work of horror, The Worm seems conceptually ripe for a huge over-arching analogy in the story, the way everything hinges on not just its presence, but its mere mention. It seems both umbilical the way it ties history together as well as blatantly phallic — not just in its shape but in its force, like its sort of antiquated demand for a bride.

I think all monsters in horror are more than their surface, the way the writer wields them reflecting the writer’s point of view, even if inadvertent. The Worm contains multitudes. His lore shows him as an external force with goals both within and beyond our comprehension, but the necessary actions in the lore and shown within the Worm cult say that on some level, for him to do what he does, someone has to be complicit, even if that means dragging bystanders into the Worm’s influence. In that sense, he’s similar to real-life tyrants. An oppressor never works alone. They have to convince others to help them oppress, be they cultists or kings.

For me, the more primal aspect of the story is summed up with that great line of dialogue that Corene repeats twice: “Fear is just a symptom of our old perspective being broken down.” Why do you think this is so difficult for us to realize when we are in the heat of our own terrifying moments?

Corene is probably being a little unfair in stating that to frightened Monique, which she realizes a chapter later when she herself has a scare. In life-and-death situations, fight/flight/freeze reactions usually dominate our outlook; we can’t see the forest for the trees. But when dealing with concepts, I think there’s a sense, especially when the concept is enormous, that we’re not only frightened by its sudden and unrequested shift in our brains, but it forces us to wonder, “What else don’t I know?” It’s different than seeking out learning intentionally. Rearranging the living room furniture can be nice when we want to do it, but if suddenly all of it rearranged itself, that would probably cause alarm. At least for me. I think fear results from that sudden, unasked-for furniture rearrangement.

Get The Worm and His Kings at Bookshop or Amazon