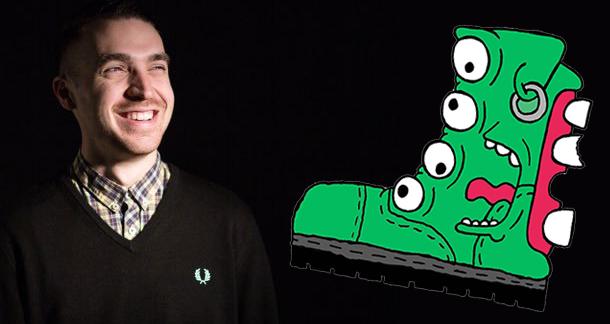 If you've ever seen a news post about a punk rock bomb squad not knowing how to cut the fourth chord on a bomb, Blink-182 being inducted into the password hall of fame, or any satirical piece about Henry Rollins, then you're familiar with the popular satirical website The Hard Times. I am a huge fan of the site, so it was a lot of fun to talk to founder and head editor Matt Saincome about the craft of satire, publishing, and the dedication it takes to run a professional site that is punk as fuck.

What was the inspiration for the site? Did you see a crust punk and decide to write an Onion article about them?

I grew up in the punk scene and was a little zine kid. I had a zine called Punks! Punks! Punks! which was about local bands and was meant to be comical (I would keep a tally of everyone in the scene’s Punk Points, etc).

I had to go to college and didn’t know which major to pick, but knew I liked writing my zine so I chose journalism. I learned some actual news writing skills and thought “Hey, maybe I should mix punk, comedy, and journalism and make that a section in my zine.” I told some friends the idea and they all said it would suck. I wrote out some articles anyways, but got busy and never published them. Several years later I had some free time and put all the money I had into starting the website. It took off immediately and now I’m here answering these questions.

The writer/editor relationship is a great thing that needs to be respected to produce top tier writing.

Do you think writing great satire is a skill that can taught or do writers just have to have it?

I think you have to question your surroundings and sense of self to write truly great satire, and I think most people are not able to do that. If they have the core observational skills and raw brainpower, then yes I think they can be taught—if they are humble, hardworking, and willing to listen to constructive criticism.

An editor I had once, who had a great impact on me, was a guy named Mark Kemp. He would tear my stories apart, but they always came out better. And I took it on the chin. Because I was learning from someone who is a truly great music writer. If you can’t be humble, you can’t grow as a writer. The writer/editor relationship is a great thing that needs to be respected to produce top tier writing.

The only people who have had difficulty at The Hard Times are people who think that their jokes don’t need to be edited because they write perfect jokes. That mentality will hold them back not only in comedy but in much of life. They will continually run into walls, blaming others, never seeing it’s their inability to study their flaws, humbly accept criticism, and dedicate themselves to improving their craft that is holding them back.

What kind of punk is Jeff Burk? (see pics below) 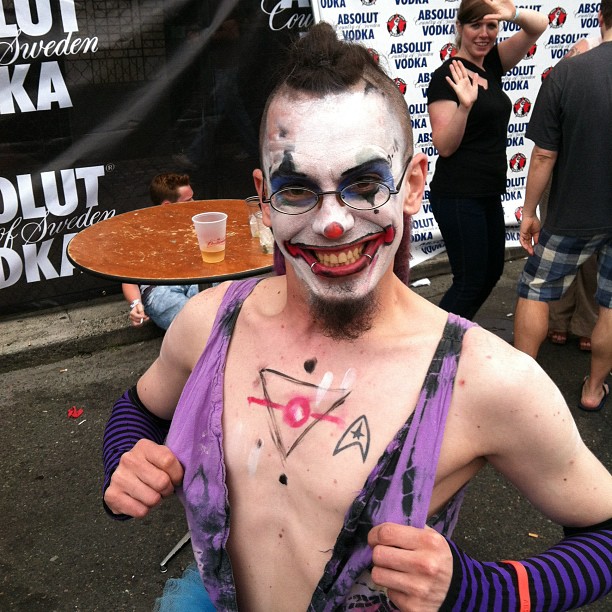 He looks like someone who plays in a band with an intense theatrical live show element that hasn’t caught on with anyone but is very important to him and like one or two other guys in the band. Like, matching costumes and pre-planned sketches for a crowd of 5 people.

Tough question, but I've got to know what are your top five Hard Time articles?

I’m going to say the last five we published, partially because I’m proud of everything we publish but mostly because I don’t care.

Do you have a process for the site? Is it just you who picks what will be published or do you have a voting system with other editors? Please take us behind the scenes of The Hard Times.

I’ve been an intern, freelancer, writer, editor, and publisher at a variety of publications. So I’ve been at most stages of the publication production process. When I built Hard Times, I built it with the idea of fixing many problems I had experienced at multiple levels.

As an editor, I didn’t understand why my sole discretion should be in charge of determining what was relevant to the entire city of San Francisco. I mean, I get it, that’s what editors do, but it felt like too much power for a subjective topic like music in a big city. Writers would pitch stuff directly to my inbox, and let’s face facts, I don’t know everything. So I felt, a bit, like a fraud — “Who am I to decide if this DJ act deserves to be profiled when I don’t listen to electronic music?” The solution I found while at that position was to recruit talented writers who focused on genres I didn’t know much about, and push myself to cover the opera and learn as much as I could. But I wanted a better fix.

So as a publisher, I wanted to dig a bit deeper and solve these issues in a real way. So without boring you with the details... Freelance contributors are a legit part of our team. They know where the site is going. They know what we want. Their voices are heard in big editorial decisions. They get paid on time. I approve each article that gets put on the website, but my decisions go through a series of checks and balances which includes each and every person who writes for our site, a team of editors I’ve installed (Bill Conway and Ed Saincome), and then me. And sometimes things don’t go my way. If I wanted to write a joke for the website tomorrow that isn’t funny, I can be stopped.

It’s an amazing, productive system we’ve built. It’s powered by our brilliant writers, and is the key to our success. If you look at the quality and reach of the content we produce versus the institutional resources we have, when compared to our competition, The Hard Times is statistically the most effective, efficient and well-run satire site in the world. And I can say that without worrying about coming off like I’m just hyping my site because I’ve seen the numbers. Seriously, we are like if you put a remote control car in the Daytona 500 and it somehow came in third place. Yeah sure, we don’t get the shiny trophy, but we’re a fucking remote control car in the Daytona 500. The institutional support, legacy, and connections of these places is astounding. We’re punk kids. I started the website with $800 two and a half years ago and we never got any financial investment. Then look at the stats. We’re beating these people up. In some cases, pretty badly. In other cases, our content is proven to be just as potent, but there’s just less of it. We’re like fucking pirate radio for satire or something. Sometimes I think about how fucking pissed I would be if I was a publisher at some of these places. I would be straight up ashamed. If I had a multi-million dollar company, office, and 30+ staffers and was getting wrecked by punk kids working out of their bedrooms? That’s embarrassing.

Have you gotten any Proud Boys pitches? Do you have any thoughts about the Proud Boys and also has there been any Gavin McIness articles on the site?

We get thousands and thousands of pitches, so I wouldn’t really know, but there haven’t been any good ones that got to the final stages of the process. I know he commented on an Instagram post of ours recently. I don’t know too much about him. The first time I saw him was on Fox News and he was yelling about how women should stay in the home, which is not something I agree with (I had a working mom growing up), so after that I tuned him out. But I have heard from friends who know him that a lot of his stuff is a schtick. I haven’t looked into it. I know he’s part of the reason Vice was successful, because of his wit and ability to say whatever he wants, and I also know that’s also part of the reason he doesn’t work there anymore, haha. I think contrarians serve their purpose in society. You need someone brave enough to break up the uniformity. I don’t like or support any weird white pride-ish or overly macho stuff though. Macho people picked on me in high school and I come from a multicultural family and friend group. But I do support everyone’s right to say whatever the fuck they want, even him, even if I disagree with it.

I am an author and editor of Bizarro Fiction. I see a lot of parallels between the Hard Times and Bizarro—they both have a satirical edge and people usually read them because of the titles. Do you have any fiction scenes that you enjoy as a reader?

Nah, I’m a big nonfiction guy. Long form articles, philosophy, and any news in general are my vibe.

I had to Google this guy. Looks like he has written like 100+ books about getting fucked in the ass by dinosaurs and shit?

You have added Hard Style to the site. Do you see the site covering more in the future? If it is ever literary/book stuff can I have a job?

We just added Hard Drive, our new video game section, and it took off immediately. We have just under 10k likes on Facebook after about 48 hours of existing. Pretty stoked on it.

About that job: Will you work for Punk Points?

Do you any advice for young writers and/or publishers?