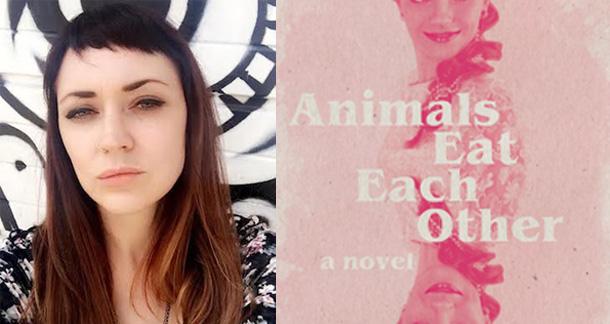 We met around five years ago now, in Tom Spanbauer's basement in Portland. We were both there for his Dangerous Writing workshop (alums include Chuck Palahniuk, Suzy Vitello, and Monica Drake). The session was led by Tom and his partner Sage Ricci. We were each given the assignment to write three pages about a moment, after which we were different. And then we spent the weekend workshopping those pieces.

I sat between Elle and Tom. We were all so nervous. Everyone around the table—you could tell. Because we were all fans of Tom, but also, we were there to share something intimate and personal, and then dig even deeper into it, to find the beating pulse of the emotions underneath. We started by taking turns reading our pieces out loud and I was so enraptured by Elle's. I mean, everyone in the class brought it that weekend, but I remember thinking: I am lucky to be sitting next to her.

And now her debut novel is out and it is just excellent. The way she writes is like she's examining you, the reader. Publishers Weekly saw how good it was, bestowing a star upon it. Elle writes with an incredible amount of intensity and emotional honesty and, damn it, just read this book. I mean, read the interview first. But then: go.

So, we met, years ago, in Tom Spanbauer's basement. Which, for me, was a very special weekend, but can you tell me a bit about it from your perspective?

I feel like that weekend changed the course of my life. Before Tom's class, I had this goal of writing a science fiction novel, but I didn't have the skill set to do it. I didn't know what I was doing. I didn't know the first thing about writing, really, other than it was something that was important to me. I wrote my piece for class, and on the first day we all read them to each other. I remember feeling moved by your essay. I was so nervous. I had never really workshopped anything in my life before, and I looked up to Tom and Sage. Everyone in the class wrote so well. I remember going back to the place I was staying that first night, thinking about how terrible my essay was. It was so bad. I seriously considered that perhaps I was not made to be a writer, that I couldn't do it. That I should give up and quit writing forever. I cried for a while and then began to rewrite my essay, keeping in mind some of the things we'd discussed in class. I learned so much. I think that weekend was when I realized that you could also publish stories in literary magazines. I just didn't know anything about the publishing world, that people ran their own magazines, that people went to school to get fine arts degrees related to writing, that you could start your own magazine. It was the introduction of that life to me.

What attracted you to Tom's style, and Dangerous Writing in general?

I didn't know people could write this way—about feelings, people, relationships. About every day interactions.

Like most people I had first heard about him from Chuck Palahniuk. I remember obsessively researching everything I could about Tom on the net. Back then I felt like I couldn't find much, but there was an email you could contact about his Dangerous Writing class. I sent an email inquiring about the class, but never heard back. I bought his book In The City of Shy Hunters. Like most of his books, they are able to elicit such an intense emotional response from me. He has a way of slowing down time that feels painful, but in a good way. I didn't know people could write this way—about feelings, people, relationships. About every day interactions. I love science fiction, but as a writer, world-building also felt so daunting, and what I really loved about writing was this emotional aspect, was examining how people interrelate. Tom's writing revealed that world for me. I read I Loved You More when I got home from class. Man, I bawled through the last forty pages of that book. I still think about his short story "Sea Animals" on a weekly basis. It's been like five years!

The story that you shared there, did you ever try to get it published or develop it further? I tried with mine but it almost feels too intimate to that space. I kind of want to leave it there.

I did, but I kind of wish I'd waited. I sent it to a place called Exterminating Angels. I remember back then thinking "This is so good now," but when I go back to read it, I don't like it. I should have given myself more time to develop it further, to develop my skill set further, to give the subject of the essay more depth.

What was the nexus point for Animals Eat Each Other? Where did it come from? For a work of fiction it feels incredibly intimate.

I was in a six-month online writing workshop lead by Rae Gouriand and wrote this short story there. Everything about the story kept asking me to expand it, and I just sort of realized that I wouldn't be able to tell it in just a few pages. I really wanted to analyze non-traditional relationships, with an eye on what manipulation can do to people, how we manipulate others in our lives, and how quickly friendships between women can become intimate and then caustic. I also wanted to create a book with a bisexual main character, and the struggle with sex and identity, as I don't really see bisexuals represented in fiction or media that often.

How did it feel when you got your PW star?

Oh my god, at first, I was like, "What does this mean?" and my friend Amanda and I googled it, trying to figure it out. I honestly didn't know. I'm so bad at this. I have a hard time receiving praise. I got nominated for a Pushcart Prize this year and got the letter in the mail, and at first I swear I thought it was spam. I knew what the Pushcart was, but I guess I didn't know why they would be mailing me. I was like, "Why are they asking me to send them things I've written? This is so confusing." When I figured out that a starred review is really special it felt validating in a way, but I still can't believe it. I'm really glad the book is resonating!

You had a kid recently—how has that changed you as a writer, from process to perspective?

My process has changed in that I write frantically now while the baby naps. I am forced to slow down a lot now, to be patient, and more mindful, which I appreciate. I don't get long stretches of time anymore to get into my work. That will change one day, which is fine, it just takes time. One difference I can't shake is that I feel like my ability to think really deeply has totally changed due to constant sleep deprivation and residual hormones or stress or from breastfeeding. I am not sure why, but I do think it's from exhaustion. All that is just transitory stuff though, it's not a big deal to me. It's just been interesting!

I'm working on another book! And hopefully some short stories in the interim. That might take a while.