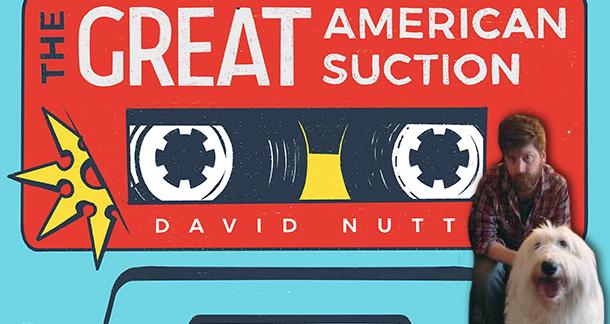 Whenever I get out of New Hampshire and visit NYC I try to attend a reading at the KGB Bar. Recently, while attending an event for two writers I was already a fan of, I caught another that blew me away. I hadn't laughed so hard at a reading in years. Hearing David Nutt read was the highlight of the evening for me. I bought his book then and there.

David was kind enough to answer some questions about himself and his excellent debut novel, The Great American Suction.

Who or what inspired Shaker, the memorable and unique comic hero of the novel?

Almost everything I’ve ever written, I think, has had some kind of Shaker character stumbling up to the door, a little brain dead, a little delusional. A semi-passive dope with a melancholic cast of mind who is, occasionally, capable of modest goodwill and manic sprees, all of which inevitably combust in some spectacular fashion. For this book specifically, I wanted to take the traditional blue-collar narrative—you know, ruddy-faced men and women in ragged flannel who grunt and grimace and stoically sip Pabst Blue Ribbon on a deteriorating porch—and sabotage it, rearrange its molecules, amp it up. I let things get wild and abstract, and I tried to infuse even the grungiest characters and their dark debacles with bewildering sunlight, some absurd joy. I think that’s Shaker in a nutshell. Maybe a bombshell. A blast crater.

There is a scene where the TV show features a band named The Fake American Orgasm. Do you watch any bad reality or gossip shows? My wife loves TMZ, but for me I watch sports gossip talking head stuff on ESPN.

I tried to infuse even the grungiest characters and their dark debacles with bewildering sunlight, some absurd joy. I think that’s Shaker in a nutshell.

Oh god, I haven’t lived in a house or apartment with cable TV for fifteen years, so I’ve been able to dodge a lot of tawdry indulgences. But whenever my wife and I end up in a hotel or a relative’s house, clicker in hand, we are total suckers for any type of animal programming. If it has fur, four legs, scampers or mewls or howls for its lunch, we’re pretty fucking enthralled. Except for the more gristly nature shows, big shaggy lions gorging on zebra guts, moldering carcasses on the high plains, that Wild Kingdom CSI shit. I don’t have much stomach for that. I should add that my wife and I waste a lot of time watching movies—hours, weeks, years—and at the end of most of them we turn to each other and say, “Welp, that was kinda crappy, wasn’t it?”

You have an engaging writing style that keeps the story moving while giving us moments to pause and appreciate a line. What recent writers have really inspired you?

Maybe not so recent, but I’ve been really swayed by a lot of writers who emerged from the exhausted, tacky tar pit that was the 1970s: Barry Hannah, Thomas McGuane, Joy Williams, Stanley Elkin. The early comic novels Don DeLillo wrote in that decade are astounding stuff; much looser and wilier than the DeLillo most people know. James Robison, who published a fast and feisty novel called The Illustrator in the ‘80s, was a tremendous influence on my book. Luckily, some of those writers are still alive and kicking and churning out wonderful work. As far as their more recent counterparts? Oh, Wells Tower, Sam Lipsyte, Chris Bachelder, Fiona Maazel. They’re all inspiring in different ways, the heat of their sentences, their humor, their heart. It does occur to me I’m not plugging anyone who isn’t in their mid-forties or older. I mean, I’m 42. Maybe this is the secret to a productive writing life: Never read anyone younger than yourself and you won’t have to worry about keeling over from envy or bitterness. Just, perhaps, cowardice.

How many drafts did you do for the novel? Was this an idea that came to you right way or was it one that took years to manifest?

Is “too many” a number? I started the thing in 2009, right as I was entering grad school. I bumbled my way through the first draft in about five or six months, never really sure where I was going, which for me is always the best way to begin: blind and clueless and sniffing out some secret scent (which eventually turns out to be the very feral stink you’ve been tracking through the woods on the bottom of your shoes). It took me a hundred pages, I think, before I struck upon the idea of a couple burnouts building monuments out of trash. That became the tiny acorn of plot that was carried forth into the next draft, and the next, and the next.

In my three years at the Syracuse MFA program, I wrote maybe four different versions of the book, each one with a little less variation from the last, slowly honing the general shape of it. That was the fun stuff. The not-so-fun stuff was the next six or so years in which I would continue to nitpick the book, get restless and irritated, set it aside, work on something else, get restless and irritated, dust the book off, hack out wide swathes, consolidate characters, move shit around, then grow disgusted and backburner it again. By that point, I stopped working in drafts. I just kept returning to the same loathsome Word document, so I have no way to tally up those revisions. Ten? Fifteen? Fifty? It’s too dispiriting to think about. But a strange thing happened in the last year and a half, when I was preparing the book for publication. As I fine-tuned the language, tweaked rhythms, henpecked redundant words, the whole thing became fun again. I realized, even at that late stage, I was still bumbling my way into new and intriguing places.

The book is super funny. I laughed a lot throughout. Did you set out to write a humorous book or did the scenes and character just add all the funny moments?

The humor is a natural side effect, something akin to insomnia or a flaky rash, of the type of characters I like to write about. I have a fondness for oddballs, goofballs, cheeseballs, cornballs. All the balls, I guess. The humor sorta bubbles up to the surface, and then I have to be a bit picky about what to keep and what to snuff. Dimwit gags, wisecracks, pratfalls: that stuff can be a handy release valve in the narrative, to modulate the tension. Humor can also be a way to nudge the reader into deeper and darker waters without anyone realizing what they’re wading into. Sometimes, though, it’s too distracting, it’s an avoidance. I never look at a page and think “Can I get a laugh here?” The humor always needs to be generated by the language, the tone, the momentum, and hopefully it erupts in tandem with some greater heartbreak, too. If I want anything, it’s the pained chuckle, the wincing sigh. That’s the (bitter)sweet spot for me.

I’m always curious what writers do when they are not writing and/or doing day job stuff. What kind of hobbies or ways to relax do you have?

I often sit on the couch and speak wonderful gibberish to my dog, sometimes while obsessively petting her. Much of my youth was spent playing scuzzy rock music with my friends, and habitually failing at it, so thank god those ambitions have fizzled. It’s still fun to get in a small room with old pals, plug in, turn up, and murder our eardrums. I do that from time to time. But mostly, it’s just couch-and-dog solace. Some reading. And watching gore-strewn horror movies with my wife that I barely remember the next day. Somehow I have the stomach for that. I don’t understand it, either.

Last, what are you working on now?

I have a story collection put together, stuff that spans the last ten years, roughly. I’m still fiddling with a couple pieces, shuffling them around, but it’s mostly done and I’m mostly satisfied with it. I have another novel that I started three and a half years ago. I’m somewhere in the middle of that, still fumbling my way through the murk, the muck. Happily so.