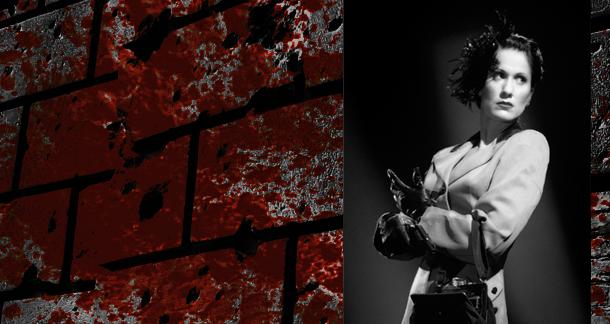 Christa Faust is one of my favorite hardboiled writers working today. Not just because she writes prose that's funny, dark, tough and moves like lightning, but because she really gets the genre. That's why I'm excited we were able to recruit her to teach a class at LitReactor.

What's most interesting about her class is the focus on writing strong women. Personally, I've always felt some trepidation about writing female characters; that, as a guy, I couldn't render an authentic female voice. So this is a great opportunity to break out of a male-dominated wheelhouse--or, for our female writers, to learn from a tough-as-nails hardboiled vet.

When Money Shot came out in 2008, I scored an interview with Christa for ChuckPalahniuk.net. It turned into a great piece (and she was the first person to really made me understand the difference between hardboiled and noir). Here's an excerpt:

Rob Hart: Drawing a line from Chandler and Hammett to the crime writers of today, what's changed about the genre? And how do you remain faithful to the trappings while updating it for a modern audience?

Christa Faust: Well, on the surface it seems like the big change is the explicitness of violence and sex, but I don't think that's exactly true. Back in their day, the Black Mask-era writers were considered extremely base and vulgar, both shockingly violent and outrageously sexy. Their stories featured realistic scenes involving criminals and underworld denizens who spoke in the unvarnished vernacular of the street. The heroes were often nearly indistinguishable from the villains and the authors defended these stories as much more honest and real than the milder, more genteel traditional mysteries.

While society's standards for what is considered "shockingly violent" have certainly changed in a progressive kind of moral inflation, on average the modern noir genre remains at approximately the same level above the acceptable norm as it has been in decades past. Noir authors today make that exact same argument; that the violence, sex and crude language in their books is simply an unflinching, realistic view of the world around us. I think they are just as right now as their predecessors were back then.

As far as updating the genre for a modern reader, I think you need to start with genuine love and respect for what came before. I don't like books that are written with a campy nudge-and-wink, referring to the genre clichés while remaining above it all with a self-consciously retro kind of meta-ironic hipness. I prefer authors that tell the classic noir stories of betrayal and desperation in modern settings, populating them with flawed, complex characters that modern readers can relate to.

RH: Are there any "rules of the genre" you tried to stick to in writing the book?

CF: No, not that I'm aware of. However, I'd argue that Money Shot is a more of a hardboiled novel than a noir novel. That was a conscious choice on my part. I didn't want to flush my characters down the emotional toilet in the classic downward spiral of traditional noir. I saw Angel Dare as a more complex, female version of the normally male hardboiled protagonist. A lone tough guy unfettered by traditional morality who walks through the grimy underworld and makes his home there but yet still somehow finds a way to come out on top in the end. More like Mike Hammer or Sam Spade than a character like, say, Walter Huff in Cain's noir classic Double Indemnity or any one of Day Keene's benighted, sexually frustrated protagonists. I definitely never saw Angel as a femme fatale. I think a lot of modern reviewers use that term to mean any tough sexy woman in a crime novel or film, but a traditional noir femme fatale is a villain, an amoral temptress who uses her sexuality to enslave and manipulate unsuspecting men. The femme fatale is all about male fear of female sexuality and that's got nothing to do with my book. Angel is not scheming villain, she's a female hero.

It's hard to argue with those bona fides. You can read the entire interview at this link.

And you can sign up for the class right here!

Admin
Mark from Lexington, Kentucky is reading The Chronology of Water March 9, 2012 - 6:02pm

Good stuff. And a timely reminder for anyone working in this genre (or wanting to...) of why Christa Faust is such a great fit for the LitReactor instructor role. Thanks, Rob. Looking forward.

I can't wait to read the some of the stories that come out of this class.  I bought Butch Fatale because of her upcoming class, and it's next on my reading list.

Great stuff. She's doing all the things in writing that I want to do, her books are fantastic from those that I've read.

Canada is famous for making some items which we used in cars and these wheels are important among that oud perfume list. However, the costs of these wheels are high but they are reliable and stay longer without punctures.