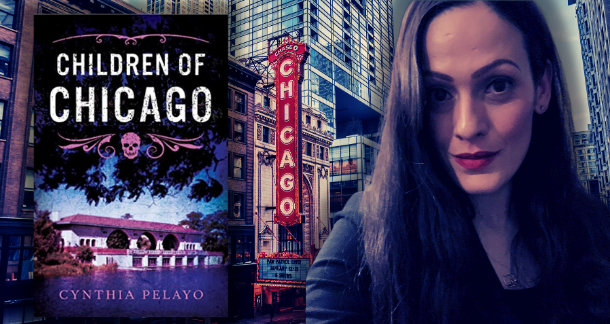 When I think about a badass woman in horror, there are many names that fit the bill, but Cynthia Pelayo is the first author that comes to mind. Don't get me wrong, she is very approachable and kind. That's not what I'm getting at. I've been following her work as a writer for some time now, and it's her dedication and work-ethic in the writing community that makes her stand out amongst the other fierce woman writing dark fiction. Pelayo's latest is called Children of Chicago—a gritty crime thriller featuring a strong female protagonist and an addictive narrative. Simply put, you need to read this fantastic book by Cynthia Pelayo, a badass woman in horror.

Obviously 2020 had it's challenges, but amongst that chaos you still managed to release new work. What are some of the biggest hurdles you faced writing in 2020?

Most definitely managing fear, anxiety and stress. I work full-time at a day job that has nothing to do with fiction writing, and while I often work remote, I did so even before the pandemic, there were changes there that I had to learn to navigate. I also had to learn to navigate having both of my sons at home while I worked. Then of course the fear of Covid and protecting my family and friends as best as I could, and the anxiety of not knowing what would come next, and then of course the stress of it all. There were some weeks that were harder to write than others. Thankfully my husband has been a great support, so he tried to take on a lot of things with the house and kids so that I could find time to write.

What are some of the biggest problems women face in the writing community right now?

Some of the issue I believe is of course inclusion, making sure we are included into the folds, and by we I mean all women from all backgrounds. Also, understanding that our voices and stories vary.

I believe we are in the midst of a shift in the way people choose the books they read. I know that a lot of reviewers want to read more diversely and there are even those who pledge to only read works by women, LGBTQ+ or POC. What else can we do as bookish influencers to help encourage change?

What ever happened to the real mothers in fairy tales? Are they missing women somehow?

I think being open to the fact that women, LGBTQ+ and POC stories may be stories you have not ever read before, and that’s alright.

Additionally, understanding that our voices and narrative styles may not be similar to other works that you have read.

The reason it’s been difficult for us to get traditionally published by editors at larger publishing firms is often because those editors say that they cannot connect with our voice or they were unable to connect with the story. If reviewers are saying similar things, well then, that’s another hurdle we have to cross.

For example, I’m a Puerto Rican woman that was raised in the 1980s in inner city Chicago. I definitely didn’t grow up the way many book editors or book reviewers grew up, so you might not connect with aspects of my story or the types of stories that are important for me to tell. All that I ask is that you try our work. Perhaps also approach our work with the measure and consideration of: ‘Did the author accomplish what they intended to accomplish?’ Rather than did the work fit into the mold of Western narrative structure and/or voices that you are used to reading.

Something I've noticed in your writing is that you spotlight some of the issues women face in society. I think this is incredibly important for writers to do. Is there any specific works of yours that you think are especially effective in getting a message across to readers?

It really depends. A common theme in my fiction has been missing people. In Santa Muerte, the YA novel I wrote 10+ years ago, I mentioned frequently women that went missing along the border towns of Mexico. In the sequel, The Missing, I was influenced by the 2014 disappearance of 43 students. Into the Forest and All the Way Through is a commentary that many women are murdered and go missing each day in the United States and we continue to move on as if nothing happened. While Children of Chicago is a commentary on inner city youth violence, in addition to people that go missing in the city. There’s a lot of commentary in that book about the character of the ‘real’ mother in fairy tales, given how the stepmother is often so prevalent, and so I ask what ever happened to the real mothers in fairy tales? Are they missing women somehow?

I am someone that has come to admire stories that feature a strong female protagonist. I've only just started the book, but detective Lauren Medina from your novel, Children of Chicago, certainly fits the bill. What can you tell potential readers about the character?

What has shocked me is that people are shocked by Lauren Medina, because I know so many women like Lauren Medina. She’s often called hateable or a miserable character, and when I wrote her that was not my intention at all. I wrote her as a blend of my personality with a few women in law enforcement that I know. We’re tough women. We are demanding women. We may have a cold streak to us because we grew up and live in an inner city. 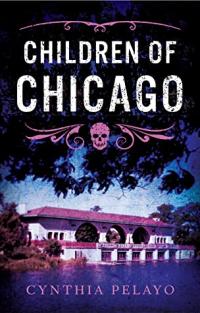 Women in Chicago aren’t passive, not at all. The women in positions of authority I know are not passive either. Most of the women in my life have aspects of Lauren Medina to them, as do I. She’s a protagonist-antagonist. And that’s a commentary to the broader discussion that sometimes people do bad things. Is it right? No. Of course not, but that’s the reality of it.

I think we are quick to forgive a male character if they are a protagonist-antagonist. Come on, Batman is really dark. He kills people. People are obsessed with the character of Hannibal Lector…who kills and eats people, but when I wrote about a woman that tells her husband that she doesn’t need him, ignores her partner and investigates a crime on her own, a woman that is independent and that is deeply scarred because of an awful mistake that she made as a child, it was not received well.

I think there’s a lot of internalized misogyny still that we expect our women characters to be frail, to be these figures that are attacked by the greater society, including men, and then they are only victorious when they fight against men or the greater society. I wanted to do something different. I wanted to write a woman that had complete agency. She accepts her faults but they don’t limit her, she doesn’t need anyone’s validation, and she will as swiftly kill someone as she will save someone.

So, Lauren Medina is a protagonist and villain, just like many people out there. There are people out there that have families and jobs and contribute to society but have done some really awful things. Is it right? Is it wrong? It just is the awful reality of our complex existence, and I think Lauren upsets the traditional hero arc, as she’s meant to.

What are some of your favorite stories that feature a female lead?

There are many, but I will give you four of my favorite female leads.

Because I write fairy tales, I have to mention a fairy tale-type story, and my favorite would be Dorothy Gale in The Wonderful Wizard of Oz.

Agatha Christie’s detective Miss Marple that has appeared in numerous of her books.

The free-spirited Holly Golightly from Truman Capote’s Breakfast at Tiffany’s.

Finally, the intellectual and fearless Clarice Starling from The Silence of The Lambs.

Who are some influential women in the writing community that have helped you along the way?

I love this question, and women that have helped me along the way include:

I consider you to be a very influential author yourself. Can you share a time when you helped another writer that you are especially proud of?

I’m currently a mentor of the Horror Writers Association, and I try to be available to my mentee as needed. Additionally, I was a PitchWars mentor this past year. It’s also this unsaid thing (maybe it’s said now) that if I have the time and you reach out to me and need help with a query or a pitch or a sensitivity check for a diverse story I’ll assist.

What is something you want readers to know about your new book, Children of Chicago?

Children of Chicago is a nod to the American tradition of hard-boiled crime fiction with dark urban landscapes, fast-paced dialogue, and tough detectives. It is equally a nod to the tradition of crime noir, and in crime noir nothing ends well for anyone.

Children of Chicago is a genre bending novel, and it’s meant to be that way. It’s experimental in that sometimes you will dip into a police procedural and then into a traditional mystery or thriller or non-fiction historical, and then when you’re disoriented, you’ll seep into a horror element. I wanted the reader to feel upset at times that it’s difficult to know who they can trust. And ultimately I wanted them to experience horror in knowing that you can’t trust everyone you thought you could trust.

Is there any advice you'd like to pass on to other women trying to navigate their writing journey through 2021 and beyond?

A lot of writing is persistence. Rejection is hard. Rejection is a part of the process. So don’t be discouraged by rejection. Continue to write and submit to various outlets until you find where your voice lands.

Also, feel free to introduce yourself to other women writers. I love meeting new people and supporting people. It’s always so exciting to see a new writer’s process from being a new writer to getting published. It’s exciting.

Get Children of Chicago at Bookshop or Amazon

Better the Devil You Know: Ross Jeffrey on Religious Horror