Cowboys, Natives, and Fishmen—Oh My! An Interview with Rural Fantasy Author Tex Thompson 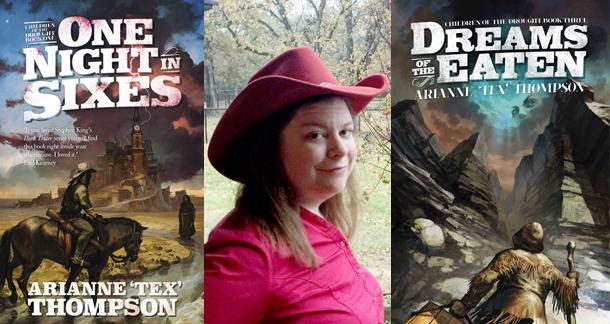 Arianne “Tex” Thompson is, quite simply, one of the most enthusiastic, charming, clever, and badass writers I’ve ever had the pleasure of meeting. I’ve proposed to her on several occasions but have yet to get a firm yes. In the meantime, I’m interviewing her today for LitReactor to talk about her passion for the writing community, teaching people who want to learn, cons of all stripes, and her weird western series Children of the Drought: an internationally-published series from Solaris that includes One Night in Sixes, Medicine for the Dead, and Dreams of the Eaten.

Thanks for agreeing to chat with me, Tex! I just couldn’t wait to introduce you to any LitReactor readers who might be missing out. For the uninitiated, why don’t you tell us a little about your Children of the Drought series? Resonant with Dark Tower? Rural fantasy? Fishmen?! Put it in our eye holes!

The short story: this is a strange, dense, mystical gutting of American history. The setting is a mirror of 1850s New Mexico. The settlers came with guns, germs, and steel, just as they did here – but in Droughtworld, magic power comes from cultural continuity, which gives the indigenous ‘home team’ a vital advantage. They’ve fought the settlers to a standstill, and even taken back some of their land, albeit at a terrible cost. The generation born after the war has grown up in a supernaturally-irradiated desert, natives and settlers and former slaves all living cheek-by-jowl in a fragile, hard-won peace – until two unlikely strangers and one horrible accident lights a fuse that threatens to wreck it all.

If you’re looking for a fun, pulpy “Cowboys and Aliens” beach read – this ain’t it! But if you’re in the mood for an intricate, thoughtful, multi-layered story with an ensemble cast...then boy, have I got a treat for you.

What have you found readers respond to most about Sixes and co? Are there certain compliments you hear most frequently, or is the spread of reaction pretty wide?

I’ve always said that when your critics and your fans are saying the same thing, you’re doing something right. So far, reader reviews mostly center on the world: whether they adore Sixes or couldn’t get into it, people have almost universally mentioned a thoughtfully-crafted, intriguing setting that reads like a real place. I am pretty happy about that.

If you could only tell potential readers one thing, what would it be?

If you’re looking for a fun, pulpy “Cowboys and Aliens” beach read – this ain’t it! But if you’re in the mood for an intricate, thoughtful, multi-layered story with an ensemble cast of flawed people mostly striving to do the right thing (think The Wire, The Sparrow, Jonathan Strange & Mr. Norrell, Firefly, or Deep Space Nine) – then boy, have I got a treat for you.

And one thing to existing readers?

I can’t believe you fell for it! I really appreciate your support, and I’m so honored by your enthusiasm for this story and these characters.

How about your path to publication? Was it long and rocky or fireworks?

And I’m here to say that you too can become a proud speck in the literary cosmos – in only seventeen short years!

You’re infamous in the Texas writing scene for being unabashedly awesome, generous, and enthusiastic with your fellow writers. You organize groups and run conferences and host classes… How on earth do you find time to do (and give) so much?

Aw, Annie. And I didn’t even bribe you to say that!

Honestly, there are two forces in play here, one of which is far less fun to discuss than the other:

1) I have a horrific allergy to self-promotion, and a constant fear of failure. Creating a great experience for other people helps with both. If you get somebody really sweet on you, they’re much more likely to go out and sing your praises (which sounds SO much better than singing your own praises). And if no amount of said singing makes a lick of difference and I bomb anyway, I still haven’t utterly failed – because I still managed to show somebody else a good time. I am a firm believer in diversifying your karmic portfolio.

2) The ugly truth, the one we don’t talk about much in this business, is that there are many, many not-hugely-successful writers out there who get to treat writing like a full-time job, because they don’t have to worry about paying the bills. You didn’t know me back when I was working 50 hours a week and crying when the “check engine” light came on – because I was hardly writing, much less socializing. These days, my double-income-no-kids lifestyle leaves me WAY more time and energy to throw around... and I figure the least I can do is throw it toward people who mostly don’t have that luxury. (That, and keep pushing to fix the massive, mushrooming, borderline-dystopian income inequality we have here in the US. Push with me, y’all.)

You’re also known for your teaching, both at cons and online, with courses as well as GrammatiCats on your blog. Is that a big focus and passion of yours, or simply a natural extension of learning what you’ve learned and going where you go?

Oh, absolutely! My first job after graduation was at a community college, teaching the fundamentals of English to adults writing below the 8th grade level. I’m talking about people with brain damage – felonies – English as a second or third language – you name it. Our mission was to learn how to write a paragraph... and everybody in that room knew why they needed that skill. That’s when I found my joy: teaching something that somebody needs to know, TO somebody who already knows why they need it. And that pretty much describes aspiring authors to a T.

More than that: the writers I meet these days come from every walk of life, and work in every genre under the sun. The stories in them are not in me... but it is such a privilege and a thrill to get to help those stories come out into the world. And I am tremendously proud to be a practicing book-doula :)

There may be only a half dozen plots in the world, but there are a million characters – and most of them have barely been touched.

You seem to travel a lot too. Where’s the coolest place you’ve been? Do you have a favorite con?

I tell you what, though: if you’re a geek/fan/enthusiast looking for a genuinely fun, inclusive, all-comers variety show of a convention, CONvergence up in Minneapolis is the best in the business. Likewise, writers who are looking to ditch the cliques and do their learning/pitching/networking in a no-fear-no-shame high-caliber constravaganza should stick a pin in the DFW Writers Conference (in Dallas, Texas) and/or the Willamette Writers Conference in Portland (which also has a mighty handsome film/screenwriting track).

Also, did you know that Montana is real? True story. It’s kind of like American fanfiction – a little uneven, not quite realistic, and yet it fulfills all the undelivered promises of the original. Missoula/Lolo is my OTP!

Is the Children of the Drought series complete as a trilogy, or might there be more installments on the horizon? What’s next for Tex Thompson?

I would love to revisit this series, absolutely – I already have daydreams of fast-forwarding ten or fifteen years to pick back up with some of the same characters. But Droughtworld is a big place, with unexplored corners I am itching to discover!

Because so many LitReactor readers are also writers, I always have to ask: What’s your best, favorite, or most unusual advice for aspiring authors?

Oh, I love this one. Here’s my vote: if you want to do something that hasn’t been done before, include someone who hasn’t been included before. ESPECIALLY someone who “can’t” or “shouldn’t” be there. There are a million post-apocalyptic dystopias out there – but show me how a Type 1 diabetic survives after the electricity goes out and the insulin spoils, and I’ll buy that story in a hot minute. The bookshelves are saturated with old-school quest fantasy – but show me what happens when the Chosen One who pulls the sword from the stone is a single mother of three, and I’m a fan for life. There may be only a half dozen plots in the world, but there are a million characters – and most of them have barely been touched. You can help fix that!

Thank you so much for sharing with us, Tex!

Thank you for being a bookish bodhisattva, Annie – the literary world blooms in your light!

One Night in Sixes (Children of the Drought)
Manufacturer: REBELLION
Part Number: unknown

A Conversation with Delilah S. Dawson About Her New Novel, 'Wake of Vultures'