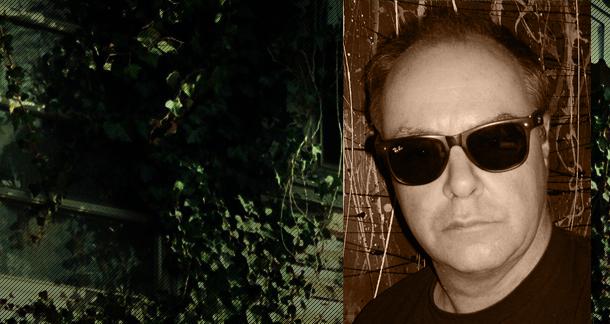 He's been called a mashing of James Ellroy and David Lynch. As a personality, some are not quite sure who he is. His Wikipedia page posits a theory that he could be a pseudonym of the late David Foster Wallace, or even a composite entity made up of other authors bent on a weird collaboration. He's Kris Saknussemm, and fresh on the heels of touring to promote his latest novel, Reverend America, Kris wants to share his unique perspective on the power of place in bringing fiction to life.

Rob Hart: When it comes to establishing a setting, which sense do you most enjoy appealing to--sight, sound, touch or smell?

Kris Saknussemm: Sight is the sense people work with easiest and first. The deep, constant hunters of my jungle past have extremely honed vision, but they move by sound and smell--because they know those sense perceptions often arrive well before vision and are truer. Why do you have a smoke alarm? It's not a camera. If you can't tell when your woman is ovulating by her breath, you're not paying attention. Taste is the most underrated sense. Shrimp at the Cafe of the Two Sisters in New Orleans doesn't taste the same as prawns in Port Vila, Vanuatu.

RH: What's better when describing a place: a high number of accurate, well-researched details, or a singular, strong image that a reader can build around?

KS: Counterpoint is a musical concept, but it's the ultimate argument against the Western Aristotle either/or. What do the flying foxes sound like in the casuarina trees? What are they doing in those trees? Why is starlight so hurtfully lovely in places like Pine Ridge, South Dakota? Good writers balance major and minor chords in their work. Details about place work the same way. Look at the work of film director Peter Jackson.  Major mass battle scene--then tight close up on a single face.

RH: Can you name some authors who painted lush, vibrant settings with their prose? How did they do it?

KS: It's fashionable now to dismiss Hemingway, but read any of his stories--from "Big Two Hearted River" to the African stories, to the little riffs on the Paris days when he was literally starving and just wanted a piece of chicken and some cold white wine. Kafka didn't write about Prague--he was Prague.   Go back to the 19th century--those people were obsessed with place--even Dickens. Melville took us straight into the heart of the machine of a whaling ship. Later, Joseph Conrad I value highly. Lawrence.  Joyce (who would give a shit about Dublin if not for Joyce?). One of the contentious issues I'm going to raise [in my forthcoming class] is that [many] female writers do place and setting very badly. I will put up several examples (Katherine Anne Porter, Flannery O'Connor, Anne Rice, etc) who do it well. But I will also point to much lauded work by Virginia Woolf--and Dorothy Allison's overall fine book Bastard Out of Carolina, which has almost no sense of place. I know the town she based that story in, and I have no sense of it whatsoever. In a genre sense, I'll refer often to Tolkien's completeness of place vision. And I give Stephen King a lot of credit too.

RH: Where do young writers stumble most, when they're attempting to establish a strong sense of place?

KS: Most young writers stumble when it comes to depicting place because they are inattentive. They're not listening, not watching--they are self-expressing for personal validation. You can't hear anyone else if all you're doing is thinking about what you're going to say next. When my air conditioning is on, it hums in regular 4/4 time and then trips to 3/4. I know which way the water swirls in my toilet. I get results because I pay attention.

RH: Describe the setting of the place you're in, right now.

KS: I live on the outskirts of neon mad Las Vegas, where many people go to get lost or reinvent themselves. There's a golf course outside my window, and many people curse when they hit a bad shot. A Mexican hunchback who sings mariachi lives beneath me. Usually, the surrounding mountains, which look like the Moon, are clear--rose, cinnamon or cobalt blue depending on the time of day. When the wind is up and the dust is in, the police get tense, my neighbors do lots of laundry so everything smells of detergent and I cook pork fajitas and get very high.

You can't hear anyone else if all you're doing is thinking about what you're going to say next.

RH: Why is establishing a strong sense of place so important to writing a good story?

KS: Establishing a strong sense of setting in writing is exactly like finding a nice place for sex. Everything is about sex, money and fear (or the lack thereof) in the end. Many people choose bad sex. A lot of self-published writers want us to read their work--plead with us--just because they wrote it. I actually care about my work and have many famous people behind me, because they realize how much I care. I look at toenail polish, I know what a thoracic wound smells like. And I can tell you to the inch and the second how far it is to my car right now. How far is it to your car? You think about that. You might have to get there fast. Time and space is place--and when you're done with that--you're dead.

Jeff from Florida is reading Another Side of Bob Dylan by Victor Maymudes March 31, 2012 - 7:12am

Compelling questions and zen koan answers...  I like it! Just this alone has me thinking about setting differently.