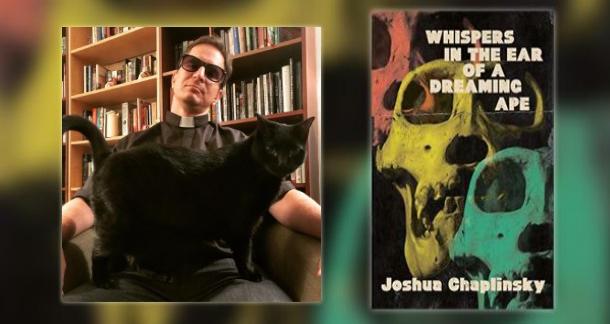 I've known Joshua Chaplinsky for a long time, and have recently come to actually like him. As the Managing Editor at LitReactor he has done an incredible job of making my life difficult whenever I get a ridiculous idea I think I should write about, shooting me down because the pitch "makes no sense" or "this isn't a site for Road House fan fiction."

He now has a short story collection out, from CLASH Books, called Whispers in the Ear of a Dreaming Ape. Here's the synopsis:

... ok that actually sounds pretty cool. Maybe I should read it. But I interviewed him anyway! Because, as Josh will attest, I have a great deal of journalistic integrity, rivaled only by my love for Road House.

We've known each other for years now, and I remember a time, maybe two or three years ago, when you published a short story and I thought, wow, that's adorable. And then you published like two dozen more in the course of a year, so I guess my first question is: why did you work so hard to hide the fact that you are actually talented?

For the record, it was about eight (in addition to Kanye West—Reanimator, but who's counting? Not me.). I learned it by watching you, Dad. You put out what, like nine books in the last five years?

If I have any talent, I wasn't trying to hide it. I'm just a late bloomer. I spent my twenties and thirties pretending to be a screenwriter, and I guess I just got tired of writing stuff that no one read. I switched to prose and now tens of people have read my work. TENS!!!

I have not read your book yet, and I refuse to, but from the title I assume this is a non-fiction Jane Goodall-type exploration of ape species. Why did you choose to abandon short fiction, which you seemed to be having some success with?

How do I even answer a question like that?

I'm glad you haven't read it. That would be embarrassing, as it's pretty much a collection of Rob Hart slash fiction.

CLASH puts out some really cool books. What kind of blackmail do you have on Leza and Christoph that you managed to convince them to publish you?

They were tabling at the Brooklyn Book Festival a few years back and invited me to come hang out with them. They'd also accepted a story of mine for their Wu-Tang tribute anthology (which is included in Whispers...). We had a good time and they expressed interest in publishing my work. It took me a couple years to put something together, but here we are.

How did you pick the stories for this collection? And what do you hope the reader takes away from it?

I basically put every story I had into one file and said, "Here you go!" Christoph was like, "Uh... we need to cut this in half." So he sent me a prospective ToC, I lobbied for the inclusion of a couple personal favorites, and voila! I think in the case of a first collection like this, less is more.

If you could pick a famous ape to play the ape in your book, who would it be? (I'm going with the ape from Congo, because I recently saw the movie on cable, and also it is the only movie ape I know.)

I don't think there is an actual ape in any of these stories? But if there were, I'd definitely go with that ape that thought James Franco was his daddy in Rise of the Planet of the Apes. Which I guess makes my answer Andy Serkis?

You previously collaborated with Kanye West and HP Lovecraft. Which of them was easier to work with? Any fun stories you can share about the time you spent with them?

Well, you'd think they wouldn't, but those two got along like gangbusters. Kanye seems to have a thing for old white dudes who hate him and his culture.

Which of my books is your favorite? Please include relevant buy links.

Come on, Rob. That's like forcing me to make Sophie's choice, if Sophie were the Octomom or that Michelle Duggar lady.

Besides me, which authors inspire you?

I'd say Steve Erickson and Brian Evenson would round out that trifecta. They both do such specific, unique things. And the harder I try to write like them it seems the further I get? Which is probably a good thing.

For years you have shunned a direct social media spotlight, appearing in the form of a chicken avatar and under the name Jacey Cockrobin. So I always sort of assumed you were not into the whole "public persona" thing. How does it feel now that you're publishing more and amassing a bit of a public profile? Are you at all uneasy about sacrificing some of your anonymity?

Hahaha. The Cockrobin moniker was never really about anonymity, I just never took social media that seriously, especially in the early days. I did it to amuse myself and it kind of stuck. Nowadays, more people call me Jacey than Joshua, which sounds like a publicist's nightmare. Even my relatives refer to me as Jacey sometimes. If I were to get rid of it now, people might think I had died.

You've been the news editor at LitReactor for years now, which probably explains our poor analytics. Seriously though, this site is very much a labor of love. What brings you back to it, and what do you get out of it?

That is a good question. It's almost like an obsession at this point. Whenever I think about handing over the reigns, I immediately start to panic. Who could I trust to do as good a job as I do? It's very personal to me. And if it weren't for LitReactor, I wouldn't "know" any of the people that have helped me get started along the path of my writing "career." 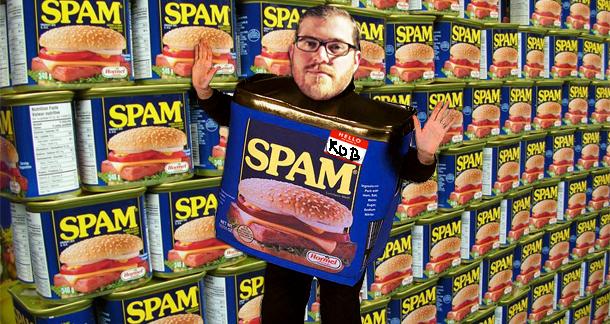 Also, why do you insist on making ridiculous Photoshops of me? They hurt my feelings.

Rob, I LOVE making photoshops of you. It brings me so much joy. The only reason I've stopped is because I don't want Random House to sick their lawyers on me.

And when I say stopped, I mean stopped putting them online. I still make them for myself...

Now that you've staked a flag in both the novella and short story formats, any plans for a novel? Perhaps a play? What's next for you?

I do have a novel coming out from CLASH in 2020. This is kind of an exclusive, but here it is: It's called The Paradox Twins. The title comes from a famous thought experiment, and it concerns estranged twin brothers who reunite at their father’s funeral to discover they have aged differently.

Needless to say it gets a lot weirder than that, but it's still early and I don't want to say too much.

Other than that, I am in the planning stages of a second novel, that may or may not contain actual apes!

Come to think of it, The Paradox Twins also features apes. I think I might have a problem.

Whispers in the Ear of A Dreaming Ape officially comes out October 15th.

You can pre-order a copy directly from the CLASH Books website.

Community Manager
helpfulsnowman from Colorado is reading But What If We're Wrong? by Chuck Klosterman October 9, 2019 - 2:30pm

This should probably be a regular thing. Who says someone has to publish a book to get interviewed?

Joshua Chaplinsky from New York is reading a lot more during the quarantine October 10, 2019 - 7:32am

From your lips to my ears, because I run Bartertown.

Community Manager
helpfulsnowman from Colorado is reading But What If We're Wrong? by Chuck Klosterman October 10, 2019 - 4:51pm

Does this make you Tina Turner or Master Blaster?

Second question, if you're Tina Turner, who is your Master Blaster?

Your picture is very beautiful but it seems you are busy buying assignment on-line and I got to know about special discounts on some websites as well. Hope it can be helpful for you.