Interview by Annie Neugebauer December 27, 2017
In: 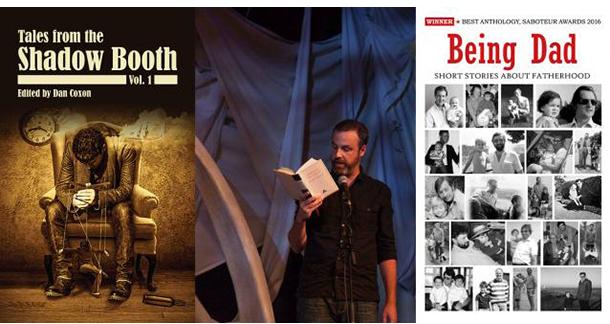 Dan Coxon is an award-winning editor, author, copy-editor and proofreader. In 2016 he won Best Anthology at the Saboteur Awards, for Being Dad: Short Stories About Fatherhood. He runs his own editorial company, Momus Editorial, and has worked for numerous publishers and authors in the past, including Urbane Publications, Unsung Stories, Influx Press and Dodo Ink. He is also a Contributing Editor at The Lonely Crowd, and has previously edited Litro magazine.

His own writing has appeared under both his name and a pen name, in publications that include Black Static, Unthology, Unsung Stories, The Lonely Crowd, Popshot, STORGY and The Year's Best Body Horror.

I connected with Dan over Tales from the Shadow Booth, a new journal of weird and eerie fiction that he’s creating and editing. (My story “That Which Never Comes” appears in Volume 1 along with stories by a dozen others.)

So Dan, for the uninitiated, would you like to tell us about The Shadow Booth? How’d it come about, what’s the dream, and who should buy it?

I’d daydreamed about starting a literary journal for a while, but I never really had the impetus – or the skills – to get it off the ground. I don’t think I really knew what I wanted it to be. Over the last couple of years, however, I’ve started to reconnect with some of the weird and unsettling literature that first set me on my path as a writer, and that gave me the focus. I was also going out to a number of live events in London and hearing some wonderful weird stories that had never been seen in print, so I knew the material was out there. It’s going to sound horribly self-centered, but I wanted to publish the kind of stories I love: weirder literary tales and smart, well-written horror fiction than unnerves more than it shocks. As for who should buy it, anyone who likes the stranger end of the literary spectrum, or the more literary end of the horror spectrum.

Shadow Booth funded on Kickstarter, with 150 backers pledging £3,090 to help make it a reality. How was the crowdfunding experience for you? Anything you’d do differently next time around?

There’s nothing better than a short story that evokes a strong emotional response in the reader but defies all attempts to pin it down.

This was my second time running a Kickstarter campaign, although I’d been marginally involved with a couple of others. I think it ran fairly well this time. If I could change anything, I’d make myself less stressed about the entire process – but I’m not sure how to do that without the help of medication! The middle period of every Kickstarter campaign is the hardest. It usually slumps for a few days and you sit chewing your nails down to the quick. Getting 150 books and other rewards packaged up and mailed out is also more stressful than you can imagine.

You’re a writer and an editor. Do you find that doing both is a pull back and forth, or that one feeds the other? Do you have a clear passion toward one?

Writing is really my passion. It’s what I always wanted to do, and where my mind drifts whenever it gets the chance. At first, editing was simply an attempt to monetize that passion. As many writers find, it’s extraordinarily tough to make much money at the writing game, and even harder to actually earn a full-time living. Having worked on literary magazines before, however, I knew that I had a taste for editing, and so I set up my own company – and was surprised to find that I loved that almost as much. Crafting my own stories will always thrill me in ways that editing can’t, I think, but helping a writer craft and refine a piece of work to publishable standard is a joy too. That I actually get paid for it makes it all the sweeter.

You have several works related to fatherhood. How do you think being a dad has influenced your work?

Fatherhood has changed my life from the ground up. It’s dramatically altered how I look at the world, how I think of myself – who I am. In all seriousness, the answer to this question could run to hundreds of pages. In terms of my writing, though, it’s made me much more aware of every second of spare time that I have. When I was younger, before fatherhood, I would spend entire days daydreaming and procrastinating before actually putting pen to paper (or finger to keyboard). Now, as soon as I have an hour to spare, I’m sitting down and straight into it. I just wish I’d learned that skill ten years earlier – I might have written whole volumes of stories during that time.

You seem to do readings and events quite a bit. Is it for fun, promotion, networking, education? I’d love to hear more about your experiences with that.

It’s all of the above, and also because I enjoy the sense of community. Writing is a very solitary activity, as is editing – I spend most of my time sitting alone at a laptop. Literary events are a chance to spend time with my peers, make new friends, and most importantly enjoy a few hours away from my desk. The fact that I’m doing all of this while listening to some wonderful short fiction makes it all the sweeter.

You’ve spoken before about the strange, specifically the weird vs. the eerie. Can you give new readers a quick rundown of what those terms mean to you? What do you think it is about them that attracts you?

This is a discussion I’ve been having a lot lately. A writer friend put it well when he said that ‘the weird’ is an effect, not a genre. It’s a tendency towards the unsettling and the strange, often the sublimely strange, but it could exist in any genre – quite a lot of modern literary fiction plays with it, as well as horror and some fantasy. The traditional horror tropes – zombies, vampires, werewolves – are usually not weird, as they’re too well defined, too easily understood. Jeff Vandermeer’s novels are an excellent example of the modern weird.

As for the eerie, in many ways that’s easier to define. The ghost story is textbook eerie, in its simplest form – something out of place or unexpected. Like the weird, it’s an effect rather than a genre, an attempt to unsettle and disturb the reader with the strange and inexplicable. I think it’s that lack of an easy explanation that attracts me, and makes them so effective in short fiction. There’s nothing better than a short story that evokes a strong emotional response in the reader but defies all attempts to pin it down.

I always ask this one for the writers reading: what’s your best, truest, or most unusual piece of writing advice?

Most of it has been said before. It’s no great surprise to hear that I’m an advocate for editing, editing, then editing some more. When I’m struggling with a story, I sometimes step away from it for a while and read an author whose work sets the kind of tone I’m looking for. I often find that when I return to it, the voice has suddenly worked itself out.

What’s next for Dan Coxon?

I’m already starting to put together Volume 2 of The Shadow Booth, which will be appearing at some point in the summer (there’s a subscription now available on the Shadow Booth website, for those who don’t want to miss it!). I’m also working on an anthology of weird fiction on the theme of British history, folklore and sense of place. We have some amazing authors lined up for that one, and a publisher on board, so it should be crowdfunding early summer 2018 for release later that year. Watch out for it!

Thanks so much for talking with me, Dan!