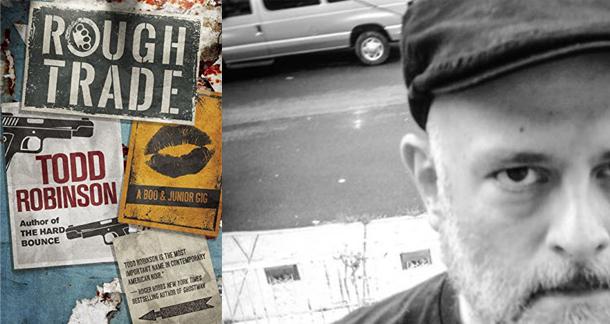 Full disclosure: Todd Robinson and I once took a trip to Boston and both got food poisoning and shared a small hotel room so we both know each other a little more intimately than we'd like. I'd call him a pal.

But if I didn't know him, I'd also call him one of the best writers in crime fiction today. His voice is so incredibly strong and unique. And it straddles this line of humor and heart that I think is pretty much unparalleled.

Rough Trade, out now, is his second novel featuring Boo and Junior, two Boston bouncers/amateur PIs who first appeared in 2013's The Hard Bounce. Since then Todd has found a new publisher (Polis) and a new groove—closing the storied short fiction magazine Thuglit (which he talks about a little more at length here) so he could focus on his writing, and making some waves in France.

I liked Rough Trade a lot. I'm not saying this because Todd keeps me in whiskey. And because of what went down on that terrible night in Boston. It's because it's a damn good book. It tackles social issues from a very smart, very thoughtful place... and is also fun as fuck in the process.

Rough Trade deals with themes of masculinity and—specifically—homosexuality. And it does it through the working class, knucklehead perspective of Boo and Junior, two Boston bouncers. What made you want to tackle this issue?

A few years back, I wrote a short story called "Peaches" that featured an LGBQ character. After it lost the Anthony award for Best Short Story, I had a writer thank me for writing it, although I wasn't sure why. And he said, "You just wrote a person." It was then that I started to notice what I see as an undertone of homophobia in tough-guy fiction. Many, many LGBQ characters are portrayed as deviant or comic-relief. I wanted to see what would happen when my knuckleheads ran head-first into their own prejudices.

The thing that I loved about this story being told through the eyes of Boo and Junior is that it's not pedantic or preachy. These are two guys who mean well but they're not PC warriors. In that sense, do you think Boo and Junior are a good vehicle for exploring social issues?

My running joke is that the blessing of being unsuccessful is that I can write whatever the fuck I want. So I do. I'm not worried about too far or not far enough.

Nope. They just are who they are. Social issues are very much part of working in a bar—you run across every possible dynamic in your average watering hole. My guys just happen to work in a bar, much the same as I do. You learn to adapt to social elements that you might not understand or even be comfortable with. Sometimes that adaptation can be awkward. For Boo and Junior it's always going to be awkward because of who they are. And these stories will more naturally occur in their cases due to that… as opposed to characters who work in a tax assessment office.

Was there ever a point you felt like you either went too far, or not far enough, in terms of what you wanted to accomplish? Was there any course correction in the process?

Not really. My running joke is that the blessing of being unsuccessful is that I can write whatever the fuck I want. So I do. I'm not worried about too far or not far enough. No matter what anyone does, it's not going to go far enough for one reader, and too far for another. If I started thinking that way, I'd tear my own head off and throw it out the window.

So instead I just write.

Your first Boo and Junior novel, The Hard Bounce, enjoyed quite of bit of success in France after it was published by Gallmeister. In terms of your writing process and subject matter, has that success influenced how you approached this book, or subsequent books in the series?

This book was almost finished when I signed with Gallmeister, so I had no idea how deeply French readers were going to embrace it. And the best thing about it is, they dig what I'm already doing, so there's no need to adjust what I already had planned for the boys either stylistically or narratively.

I can't express how happy that makes me.

In Rough Trade, Boo is coping with injuries he got in The Hard Bounce. Both him and Junior tend to get knocked around a fair bit. How many B&J books can you write before the two of them fall apart?

I think there's one more. In the fourth book, Boo is just going to be in a full-body cast, and Junior will be ashes in an urn. His snarky ghost provides comic relief.

Actually, that would be fun as fuck to write…

Is the third Boo and Junior novel something you're actively working on? Anything else in the pipeline?

The third Boo and Junior novel is in the works (Born to Lose), and then I'm going to take a little time away from the boys and see what I can do with a standalone. Time is always the enemy. I'm not even close to being able to write full time or even part-time. I write where I can. And if Boo and Junior continue to grow in popularity in France, then that's where I'll have to focus my attention. That's where my success in France will perhaps change what I'm planning.

You recently shut down Thuglit. You've talked a bit about how hard it was to sustain. It's been a few months now. Has your perspective changed? Has it increased your productivity in other arenas?

Not really. Without getting too deeply into my personal life, I alternate working six and seven shifts a week at a couple different bars. I couldn't work the way I need to at the moment at jobby-jobs and maintain the magazine, which paid out very little for all the work that went into it.

Remember the benefits I mentioned about being unsuccessful? The rest of it is the curse.

What the fuck am I supposed to do with this short story I wrote that would probably be a good fit for Thuglit?

Hold it between your knees.

You've called yourself a cautionary tale of the publishing industry. You've dealt with a lot of straight kicks to the teeth. Being where you are today, if you had the opportunity to go back in time and give one piece of advice to Little Aspiring Writer Todd, what would you say to him?

Don't. Become a firefighter or some shit.

Sorry if that's not inspirational.

Should have known you'd end the interview on a down note!

It's the New Englander in me.