A Conversation With Tobias Carroll On Short Stories Versus Novels, Teaching, And His Two New Books, 'Reel' And 'Transitory' 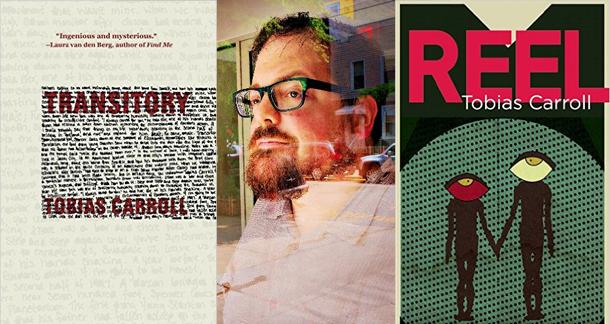 The last few months have been busy for Tobias Carroll.

His first collection of short stories, Transitory, came out this past August. Then in October, his first novel, Reel, came out. This is on top of being an editor at Vol. 1 Brooklyn, an instructor here at LitReactor, and in general, a good literary citizen, preaching the good book word on the social medias.

I first met Carroll at Housing Works Books, where D. Foy was reading from Made to Break. I was courting Foy to teach for us, and Foy, being the nice guy he is, suggested I take a look at Carroll, too. We exchanged information and I looked into him when I got home and immediately realized: This guy is the goods. There's a reason Publish or Perish remains on regular rotation here. Carroll is a consummate professional who gives great insight to authors who are trying to break into the publishing process.

He's also a hell of a writer. And to mark the release of his new books, we talked a bit about promoting two at once, touring, and what he's got coming up next.

I wrote a lot of mediocre fantasy and science fiction stories when I was in middle school; I have no idea what their current whereabouts are. (Though I recently talked to my dad and he mentioned the Commodore 64 that I used to write them is still in my parents' basement, so—it's possible that there's an absolute treasure trove of stuff down there.)

The first story I wrote as an adult that wasn't for a class or anything like that was probably a short piece called "Weary," which was originally published on the website of TNI Books, a small press that a friend of mine ran for a few years in the late 90s and early 00s—among other things, they released the first edition of Camden Joy's nonfiction collection Lost Joy, which Verse Chorus Press reissued recently. That was a story loosely based on the very brief time in college when I worked in film; I ended up putting it up on Fictionaut a few years ago, because I'm a completist like that.

I think [editing and teaching] helps keep me honest. Especially instructing—that process has caused me to think a lot more about what I value in fiction, and thus, it's helped me think a little more formally about things.

When THE2NDHAND accepted my story "Spencer Hangs Over Newark," which is the oldest story collected in Transitory, I had a beer with some friends. I think, honestly, the boost to my confidence was the real celebration there, if that makes sense.

You've had two books come out in very close proximity to each other. Was that deliberate?

Not at all—it's more coincidental than anything. Things had been in the works with my novel Reel at Rare Bird when I submitted Transitory in Civil Coping Mechanisms' Mainline competition. The release dates being two months apart just worked out that way. Though I can think of a few other writers who have also had multiple books due out on multiple presses this year, including Melissa Broder, Samuel Ligon, and John Langan, so—seems like good company to be in.

What's the experience been like, working with Rare Bird and CCM at the same time? Were you able to make the promotional process complimentary?

I've been very lucky—the people I've worked with at both presses are incredibly responsive, friendly, and easy to work with. I think there's been some areas in which being a writer with two books out in close proximity has helped—it means that there's more to talk about in interviews, for one thing. And as I'm starting to see more press for Reel show up, there have been some references to Transitory, which is nice. I'll be doing some more touring in the months to come, and I think having both books out will make that a little easier, too.

Regarding touring: Is your publisher helping out, or are you handling that yourself? I ask because I'm interested in the dynamics. For example, I tour, and my publisher helps some, but I foot some of the bill too, and I'm definitely not selling enough books to cover my end of the cost, but I think it's a good move, to meet booksellers and readers. Some authors, though, find it's not rewarding or worth the expense. What's your take on the process?

I've been covering the cost of touring by myself. I'm definitely doing it for similar reasons as you, as far as meeting people and getting out there. This past weekend, I went up to Portland, ME, to read as part of the literary component of the Waking Windows music festival. I sold some books, but I also had some really good conversations, made some friends, and talked with a few people about places to read elsewhere in New England. It was definitely a reinvigorating experience.

Do you have any places in mind to visit?

I'll be doing some readings on the west coast in November. I'm hoping to do more in the northeast in the coming months, and I'd also like to get out to the Midwest, to New England, to various points in Texas, to Nashville—pretty much anywhere, really.

Do you have a preference, between writing novels and short stories?

Not really. I like what each can do: there are things with the scope of the novel that I can't do in a short story, and I can experiment a little more with structure in a short story than I might be able to in a novel.

Besides being a writer, you're also an editor at Vol. 1 Brooklyn and a writing instructor, leading our Publish or Perish class. What do you get out of the editing and teaching process, that translates over to your own writing?

I think it helps keep me honest. Especially instructing—that process has caused me to think a lot more about what I value in fiction, and thus, it's helped me think a little more formally about things. Alternately: it means that I can't get away with being sloppy. Not that I think that I am, but—it's a check on some of my worst impulses as a writer. As for editing—I find it to be a really great way to see what's out there, and I think it's also made me a better editor of my own work.

I'm working on revising a novel set over the course of a couple of decades, following three friends from a small town in northwestern New Jersey, as well as various people in their orbit. It's interesting, because parts of the first draft were written when I was doing more overtly realistic work, and the revisions have involved a little more surrealism and weirdness at the fringes. I have no idea if it'll work, but hey. And there's another project that may become a novel or novella that I recently had a pretty big structural insight into. I have a couple of short stories and essays in progress as well, so that should be fun.