A Conversation with Sarah Gerard About Florida, Getting Reviewed by the Times, and Her New Essay Collection 'Sunshine State' 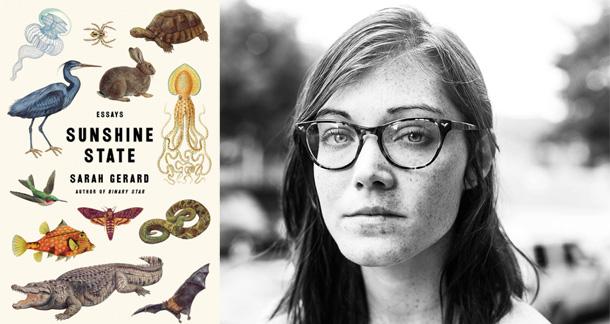 You could say that Sunshine State, the new essay collection from Sarah Gerard, has generated a little bit of buzz.

Following up her knockout of a debut novel, Binary Star, Gerard mines her home state of Florida in a series of essays that veer from deeply personal ("BFF") to intimate portraits of a state often made to be the butt of jokes ("The Mayor of Williams Park"). It's exactly what you want out of a good essay collection: It drills so deeply into a unique experience that it finds the universal current.

The book is out today, and it's a fantastic read. Check it out. But first check out this interview. And then check out Sarah's next writing workshop with us, The Alchemy of Theme, which starts April 20.

What goes into the curation of a collection like this? Obviously it all has a unifying theme of location, but—what was the nexus point, and did you write anything specific for the collection? Did anything not make the cut?

Most of the essays in the book were written for the book. I had a vague idea of what each would be about, and I saw the book as a kind of shape, taking form in my mind—I knew what I wanted the color and texture of each essay to be. About three weeks into my initial research trip to Florida, I was sitting in the living room of one of my close friends, also a writer, attempting to organize my research in my mind—

Research is hard, because you don't always know what more you need to know; you can easily go down the wrong path and get yourself way off course. I've learned that you can avoid going down the wrong path oftentimes by looking inward and asking yourself honestly if the path you're going down is fascinating to you. Will it sustain your interest the further you go? If not, why follow it? The writing won't be interesting, or even coherent, because it won't be pertinent to the story, which has to come from inside you.

I tore off a corner of paper from my notebook and wrote on it What does it mean to believe something is true? and taped it to the bottom of my laptop screen.

—So, I was sitting in my friend's living room trying to decide where to go next in my research. I was researching several essays at once, collecting materials to write from later: everything from interviews with city officials to websites about golf course grass to obscure histories of marginal religions. I felt strongly that there was something holding it all together, and I knew that I needed to articulate that in a research question to avoid the problem I mention above, about getting off course. I thought about each of my characters, and what was fascinating to me about them—as a writer, I'm fascinated most by other people.

Suddenly, it occurred to me that what made each of these people so charismatic was their fervor of belief, whatever their belief was: the real estate agent, the homeless minister, the animal hoarder, even myself as a teenager. That felt deeply true to me about my home state, as well, which I was treating like a character—the book, itself, is a sort of portrait of Florida.

I tore off a corner of paper from my notebook and wrote on it What does it mean to believe something is true? and taped it to the bottom of my laptop screen. It stayed there until a few weeks ago, when I replaced it with the guiding statement of the novel I'm currently writing.

When you call it a portrait of Florida—did you want to show that Florida is more than the internet-meme "some guy does meth and goes to Wal-Mart riding an alligator" Florida? Did that play into your thinking at all?

Absolutely. As a writer, my goal is always to inspire empathy as well as entertain. Those kinds of stories are funny but the characters are two-dimensional—as a reader, you're not understanding them, empathizing with them. You don't care what happens to them. That's why the best form of delivery for stories like the one about a man riding an alligator to Wal-Mart is a two-second news clip or a tweet.

Whereas, in a book-length work, you need three-dimensional characters to pull your readers through from beginning to the end, three hundred pages later. You can still include Florida Man-type stories—the protagonist of my title essay is a bird hoarder, for instance—and there can still be plenty of humor, but instead of laughing at the person, you will be laughing along with them, or humor may come from the situation. When you actually care about a character, there's no way you can ridicule them.

The collection starts out on a very deeply personal note with "BFF." The woman you're writing about—did you reach out to her to let her know this would be published? Do you have any thoughts of expectations related to her reading it? Does it not matter?

In most cases, if I'm writing about a personal friend, or a family member that I want to maintain a relationship with, I will send them my writing before publishing it. In this case, because we hadn't been in touch for several years, and I felt it was best to continue not to be in touch, I didn't feel any obligation to send her the essay before publishing it. (It first came out as a chapbook in 2015.) I'm comfortable with her reading the piece, and if I weren't, I wouldn't have published it. I feel I've said what I needed to say, and can stand behind what I've said. I believe she knows about Sunshine State.

There's a strong mix of personal reflection and journalism here—the latter especially in essays like "Mother-Father God" and "The Mayor of Williams Park." Do you find one of those things—personal reflection vs. research—more enjoyable or easier than the other?

They feed each other. Reaching outward into the world transforms me internally. I'm learning about the world as I write, and changing as a person, so that when I do writing that excavates my inner world, I have a richer experience, and I can delve more deeply. Neither one is easy—writing is hardly ever easy. Even writing an email is difficult. But it's a lot more fun if, as a writer, you take an interest in the world outside of yourself, and your comfort zone. I recommend walking boldly into situations that make you uncomfortable, to write about them. See how much more verve your writing has afterward.

Nothing you ever write will satisfy everyone, so you might as well write what you want, and be prepared to stand behind the writing you do, fictional or not.

I think all writing is brave. Whether or not you're writing fiction or nonfiction, people will make assumptions about you, the writer, and they will find something in your writing to criticize, which can feel like a personal attack in the sense that all creative writing is personal. My first book was a novel, and you wouldn't believe some of the things I read or heard people say about me personally, based on what my character does in the story. One of my ex-boyfriends actually wrote a nasty Goodreads review about the book because he believed I based a character on him (what an asshole!).

Nothing you ever write will satisfy everyone, so you might as well write what you want, and be prepared to stand behind the writing you do, fictional or not. The real question isn't whether one form of writing takes more bravery than another, but whether you are finding deep satisfaction in the writing that you're doing, whether it's fiction or nonfiction. If you feel you have more freedom to be honest in a fictional world, then that is what your story requires, and you follow the rules of fiction. If sticking to the facts will ground the story so that it has more impact, then do your due diligence in your research.

It's such an honor! What else can I say? Honestly, I didn't even know about it until a friend texted me asking "if I could believe it," and so on, and she was so excited—I had no idea what she was talking about! I was at a party and had to step away and have my friends read it first. Then I couldn't bring myself to look at it for several hours. Then, for a few days, I was convinced it wasn't a good review at all, that it was actually mildly and unfairly critical. Of course, that's not true, it's actually very complimentary... All to say, it's a very surreal experience. I'm overjoyed.

A little teaser for the next book: Can you share the guiding statement that took the place of the one for Sunshine State on your laptop?

I think you have a tallent if you can cover such a brave topics in your works. I am the beginner in writing and I just started working for https://writix.co.uk/assignment-help and I can tell for sure that it is really great when you have an opportunity to write about the things that really interest you.