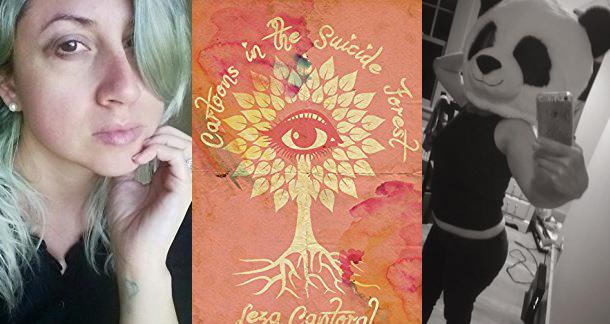 Leza Cantoral is one hell of a multi-hyphenate: writer-poet-publisher-editor-podcaster-social media maven-trash panda.

Her short story collection, Cartoons in the Suicide Forest, has been nominated for a Wonderland Award, the highest honor in the Bizarro genre. She also podcasts at Get Lit with Leza, and she'd editor-in-chief for Clash Books. Her social media presence is both intensely personal and incredibly engaging. She's one of the cool lit folks I run into once or twice a year—at AWP or the Brooklyn Book Festival—and just wish I knew a little bit more about. So I interviewed her! I'd been meaning to for a while now, but her recent appearance in a Facebook video, reciting poetry while wearing a giant panda head, really sealed the deal...

Explain Trash Panda to me. Also, where do you even get a giant panda head?

Trash Panda is a poetry collection that I am working on. It is inspired by bad emo Tumblr & Instagram poetry. I found this amazing furry panda head at Wal-mart in a bin full of animal heads. You can find anything at Wal-mart. The very next night I did a live FB reading of my poems while wearing the head. I thought it would be pretty hilarious and it was. One guy got mad that my video got more views than his, though. Apparently, he had made a video a week before in which he read his poems while wearing a giant cat head and it only got like one like, so he was pretty butthurt.

Your short story collection, Cartoons in the Suicide Forest, is nominated for a Wonderland Award. How did that feel when you found out?

I was psyched! The award is inspired by Alice in Wonderland, which is my favorite book of all time and I love going to Bizarrocon, where they hold the Wonderland Awards ceremony. I am nominated alongside some very talented people, so it is quite an honor. This collection is an accumulation of years of work, so that is very rewarding to see that people enjoyed it enough to nominate it.

[Bizarro] appealed to me because I felt like I could do anything and let my imagination run wild. It made storytelling so much fun.

Cultured Vultures says your work is "marked by a gleeful, technicolor insanity." What attracted you to writing in the Bizarro genre in the first place?

I liked the freedom. I wrote mostly poetry before discovering Bizarro. The genre appealed to me because I felt like I could do anything and let my imagination run wild. It made storytelling so much fun. I went to my first Bizarrocon years ago and that is really what got me wanting to write Bizarro. It was exciting meeting writers and publishers that I could talk to. I felt like it was something I could have fun doing. Bizarro reminded me of my favorite genre, Surrealism. The Surrealist French and Spanish poets are a huge influence on me. I love Charles Baudelaire and Arthur Rimbaud. I had always wanted to be part of a cool art scene and Bizarro seemed like that kinda scene. I think of Bizarro as the Chaos Magick of fiction.

You've been podcasting at Get Lit with Leza, and you've spoken to some cool folks: Sarah Gerard, Kelby Losack, the wonderful Elle Nash. What attracted you to podcasting, and what kind of show do you want to cultivate?

I used to drunk-dial and Skype with my writer friends late at night and talk for hours, so this is kind of an extension of that. I love talking to people. I love gossip, I love art and pop culture. I love talking shop with other writers. I will talk your ear off about my theories on Walt Disney and Chaos Magick if you let me. Something I have learned by doing the podcast is to be a better listener. I will admit, I am one of those people that love to hear themselves talk. I think most writers are narcissists. So this has been a great opportunity to expand my horizons beyond myself. I think what really made me interested in podcasting was the podcast by my now fiancé, Christoph Paul, called The Passion of the Christoph. I met him on Facebook and I’ll be straight up, I was impressed that he had a podcast with a decent following. I would listen to it and get so excited when he would mention me. It made me feel famous.

As the Editor-in-Chief of Clash—what do you look for? What stands out to you as a piece of writing worth publishing?

I look for strong voices and POVs that I have not seen before. I look for stories that grab me and don’t let go. I don’t care about genre. I care about something I can connect with that I think other people would connect with too. Relatable is the key word here. Strong story arcs, strong characters, new ways of approaching old tropes or narratives. I am looking for authors who have strong social media platforms because that shit matters. We are a small press and we do our best, but you need to be willing to hustle. I want to be surprised and excited. I get bored very easily, so if you don’t hook me in the first page I probably will not keep reading. I am actively seeking women, LGBTQ, and POC. I am looking for raw talent.

Your fiance is Christoph Paul, who is also a writer and recognizable face in literary circles. How does it affect your relationship—both of you being writers, and both of you maintaining a strong social media presence? Do you find yourselves collaborating a lot, or do you both do your thing and reconvene at the end of the day?

We are constantly up each other’s asses. We are each other’s best friends, and we work together, and we are lovers, so it can be hard sometimes. We definitely get on each other’s nerves. We edit each other’s stuff and we make all business decisions together. I think what suffers is relationship time. We are gonna be taking it up a notch and actually working on a book together, like actually co-writing. As far as social media, it really helps that we are both active on it. We met on the internet so it isn’t really that weird. He likes to mess with me and me with him. We make jokes at each other’s expense and we are both chill about it cause we get that this is how we express ourselves.

We are each other's biggest cheerleaders and we keep each other motivated. I call him out when he is not putting in enough effort and he does the same with me. We work in separate spaces and meet up for meals. We usually have breakfast, lunch, and dinner together. He makes breakfast and I make dinner. We are total slobs. He leaves half-full coffee cups all over the place and drops his clothes on the floor and I am not much of a housekeeper. We are each pretty self-involved so that can be hard. I get mad when I feel he is not paying enough attention to me and he gets mad when he feels I am not giving him attention. Our life basically consists of writing, editing, and chilling with the cats. We live out in the country so there is really nothing to do. Our social life consists of going to cons and having writer friends over.

What's next for you?

I am working on my first novella. It’s called Dear Diary, I Think I’m Haunted. There is a big supernatural element. There’s fiction and nonfiction and the line is very blurry. All I can say is it involves possession, witchcraft, demons, and it is a true love story with a lot of darkness in it. I aim to get it done by February next year. I am working on my poetry collection, Trash Panda. So that will come out sometime. In the meantime, I will continue to post the poems on my Instagram. If you like bad emo poetry it will be your jam. February will also be the release date for Tragedy Queens: Stories Inspired by Lana Del Rey and Sylvia Plath which will be the third CLASH Books anthology. There are short story collections and novellas that we are currently editing for Winter or Spring release. We will be tabling at the Brooklyn Bookfest, Wordstock, & AWP.

A Conversation with Tiffany Scandal About Portland, Second-Person Narratives, And Her New Novella 'Shit Luck'