A Conversation with Kristen Lepionka About Private Investigators, Bisexuality, and Her Debut Novel 'The Last Place You Look' 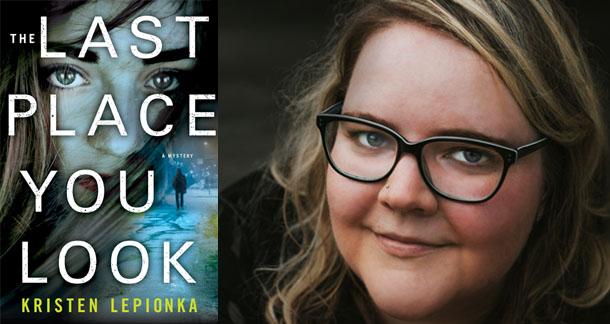 The Last Place You Look by Kristen Lepionka came to me by chance. Someone at the publisher reached out and asked me to blurb it. I'm always kind of shocked to get asked this, 'cause who am I? But hey, free books! So I said yes, not really knowing what to expect. And it knocked me on my ass.

It's easy to get tapped out on crime fiction, and The Last Place You Look felt like such a breath of fresh air. In large part because it features a female private investigator who manages to be hardboiled and feminine at the same time. Roxane Weary has some of the trappings of the classic PI—she likes to drink, her life is a bit of a mess—but she never feels like a male character in a female skinsuit. Kristen is also really good at what I like to call the A-B-C of crime writing—how one clue leads to another leads to another, so the story progresses naturally, rather than through an abundance of coincidence and deus ex machina.

Seriously, this book is so good it's kind of hard to believe it's a debut.

What attracted you to the PI genre in the first place?

I've always loved mysteries of all types, including procedurals—but there is something interesting to me about the flexibility of PI characters. They're not cops, so they aren't governed by the same rules and bureaucratic limitations as members of police departments, but they also don't have access to the same systems and tools. So PIs by their nature have to be extra resourceful and inventive. I also love that a PI can choose her cases, rather than having them assigned to her like a police detective, which means that, technically, she can turn her back on one if it gets too hard—and THAT means that the dogged determination of a PI who just won't quit has a different flavor, because that determination is by choice.

[There's] a lot of me in Roxane's character. More than anything else I've written, which makes me feel a little exposed.

Where did you find the inspiration for Roxane? How much of you is in there?

I feel a little weird about saying this, but there's a lot of me in Roxane's character. More than anything else I've written, which makes me feel a little exposed. Roxane and I both identify as bisexual, drink whiskey (her more than me!), and are hopelessly nosy and obsessive about resolving things. I'm the person to ask if you need help locating something—but on a small scale, like when you can't remember where you put your wallet. Chances are, I noticed the wallet in the apartment and can tell you exactly where it is. It's a little annoying, but I can't stop noticing stuff like that. Roxane is like this too, but she harnessed it into a career (whereas I just annoy myself and others with it). We see the world in a similar way, too—we're cynical, fairly quick to assume the worst, but with a profound desire to be proven wrong about people. But just as much of Roxane's character is pure fiction: her family, her fearlessness, her confidence, etc.

One of the things I really liked about the book was that it felt classically hardboiled without getting caught up in tropes or homage. Which is a big trap a lot of fall into, and the work always suffers—the more you wink at the audience, the more you lose them. Did you have anything like that in mind while you were writing—did you find you had to push yourself away from the more familiar aspects of the genre—or did the voice just develop naturally?

The voice developed fairly naturally, but I was mindful of the tropes of the genre too. Roxane is kind of a loner in her day-to-day life, but she also has a messy family situation that is very much a part of her. She drinks too much whiskey and is bad at relationships, like many male counterparts in the genre—but because she's a woman, I think those elements feel different, and not trope-y. The book is set in Columbus, Ohio, which is new physical territory for a hardboiled PI novel, and Roxane as well as the people she meets are Midwestern in their bones. Columbus is a big city, but we have plenty of farmland only minutes outside the city limits. That creates this interesting tension between city and country, while a lot of hardboiled mysteries exist squarely in urban territory. That was something in particular I wanted to explore.

In that same wheelhouse, I really liked that Roxane was both tough and feminine. You didn't sacrifice one for the other. What did you want Roxane to be, in the crime and mystery genre, and how did that affect the writing of the book?

I wanted her to be the kind of detective character that I've always wanted to read about: like you said, tough and feminine, without some of the unrealistic "trained assassin who never so much as bruises" type of revenge fantasy or wish fulfillment, nor the "I-woke-up-this-way/she eats cupcakes for breakfast and never works out but of course she's still a flawless size 2" element of some female characters. Those types have their place, and I can certainly enjoy stories like that as a reader. But I wanted to create a character who wakes up looking and feeling like shit sometimes, because that's how life works. I wanted to write a woman with a drinking problem, because that's territory usually left to male characters in crime fiction. I wanted to write someone who takes risks physically, and suffers the consequences of them. And most of all, I wanted to write Roxane as deeply flawed and struggling, without fetishizing how fucked up she is. She is a mess, and it's not cute or charming. It's just the way she is, and it means she has to work that much harder to get through.

I'm also in the brainstorming stages of another whiskey-related series as well as a stand-alone crime novel about (among other things) donuts and female rage.

Why was it important for Roxane to be bisexual, and to explore that in the book?

Great question. It was hugely important to me because, as a woman who identifies as bi, I always looked for a bi character in mystery fiction and rarely found one. Bisexual representation is pretty bleak, and, in my opinion,  bi characters are often used to either titillate the reader a la "Look how edgy this character is!" or, even worse, bi identity is used as a lazy, dangerous shorthand for dishonesty, a la "Look how duplicitous this character is, she's sleeping with everybody!" I hate all that crap. I wanted to write Roxane's bisexuality as a natural part of her life, not as her defining attribute, but as one of many layers to her character. It was also important to me to write her not just as someone who is attracted to both men and women, but as a character who identifies as queer and moves through the world with that identity. The experience of coming out to friends and family is something that shapes a person, as well as dealing with stereotypes, misconceptions, and prejudice related to sexual orientation. I wanted Roxane's character to be informed by those things, rather than just tacking on her bisexuality as an afterthought.

Were there any female PIs or female series characters you looked to for inspiration?

What are you working on next?

I recently completed the second Roxane Weary mystery, which is now with my editor. I'd love to write a million more Roxane books, and I'm also in the brainstorming stages of another whiskey-related series as well as a stand-alone crime novel about (among other things) donuts and female rage.