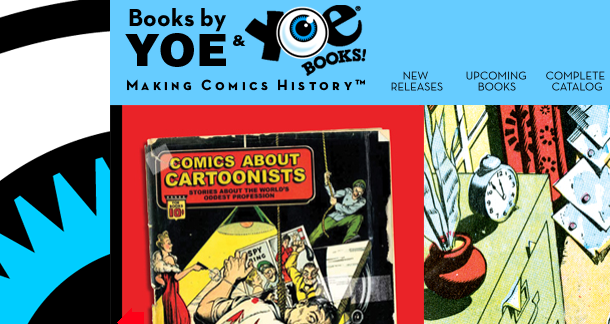 A finely tuned, cherry red '57 Chevy Bel Air, that perfectly plump pin-up girl making eyes, a dark pull on a fine cigar; these are “classic moments” in time that we always want to preserve. But everything just comes back as a photocopy of the original, weaker with each go-around. What Craig Yoe, author, comics historian, editor, and art director does, is take so much pleasure in the salacious and gruesome “classic moments” in the comics industry and only he is able to perfectly preserve the past, freeze it in time so that we may experience and enjoy a way of life long gone.

I first came into contact with Yoe several years ago with the release of his book Secret Identity: The Fetish Art of Superman's Co-Creator Joe Shuster. I was immediately taken with this author and editor and his particularly fine tastes, but I was smitten with this caliber of unapologetic comic historian.

Since that moment, over the years, I’ve slowly reached my hand down the Yoe rabbit hole becoming closer to this mastermind of Hatter proportions. He’s a man insane enough to live and work in an old stone castle, complete with turrets and gargoyles, filled with comics and cats, about an hour from NYC, but sane enough to probably know that’s bizarre. This exact blend of indulgence and appreciation, eccentricity and self-awareness, is what makes his work in the comics industry so sky-high amazing.

Yoe’s underestimated bond with a comic’s origin and species, mixed with his eye for art and graphic design makes for powerful, comic-ful must-reads, cult hits, and trails of comics, old and new, in the wake of Yoe.

I published fanzines of comics and cartoon history and commentary in my parents basement... when I was 16 years old, 47 years ago—and never looked back.

You are not only a comic book historian, but also an archeologist and preserver of comics. What led you to these life callings?

I love the history of comics. To me the only good cartoonist is a dead cartoonist, with a few exceptions like R. Crumb. I was turned on to comics via the beginnings of Spider-Man by Stan Lee and Steve Ditko, a couple of more living masters on my short list. Immediately my interest in the whole field and continuum was ignited. Besides comic book superheroes I loved all comic book genres and New Yorker-type cartoons, political cartoons and the rich history of comic strips. I published fanzines of comics and cartoon history and commentary in my parents basement in Akron, Ohio when I was 16 years old, 47 years ago—and never looked back. While always digging comics I did get distracted career-wise for a while being a night club owner, a minister, a toy inventor, a creative director for The Muppets, Disney and Nickelodeon and other ungodly pursuits. But now I am again, figuratively anyway, back in my parent's basement creating print about comics.

You like a little sex in your comics don't you? When did those two distinct things merge for you?

Hm. I became passionate about comics and their history when I was an adolescent and was at the same time full of sexual questions and desires--maybe that has something to do with it. In high school I discovered R. Crumb. If Carl Barks was famously "The Good Duck Artist", i.e. the cartoonist who created the best Donald Duck adventures, then, for me, R. Crumb was "The Good Fuck Artist". I learned what went where by having a grand time at home looking at Crumb's fantastic sexually oriented drawings. I greatly pity the unfortunate more popular students who were having to find out about the facts of life fumbling in the dank back seats of dark cars parked at late-night drive-ins.

You may think Yoe is an eccentric indie publisher who’s obsessed with nerdy stuff. And frankly, that’s quite true. But it’s all in the way you approach it. Yoe is not messing around with his passions and truthfully, everything he touches turns to gold. So like a nice little boy, he decided to share his talent.

You have your own comics publishing company, Yoe Books, that works intimately with comic giant IDW. How did this come to fruition? Would you call Yoe Books an imprint or partner to IDW?

I have known Greg Goldstein at IDW for many years through my design work, and when my book Secret Identity: The Fetish Art of Superman's Co-Creator Joe Shuster became a sensation he suggested I start what I would call an imprint for IDW. But, being described as a "partner" is apt, too.  Ted Adams, Greg, our IDW editorial coordinator Justin Eisinger, Dirk Woods in Marketing and Alan Payne in sales are all incredibly supportive partners in the endeavor. They do all the heavy lifting while Clizia Gussoni and myself have the fun of putting the books together. The imprint/partnership with IDW is one of the greatest things in my whole life. I love it so very much!

While Yoe’s “relationship with IDW is deeply wonderful and satisfying” he is not “monogamous” with them and has continued to work with publishers such as Random House, Hyperion, Fantagraphics, Running Press and Abrams (to name a few). Yoe is also on the verge of announcing thrilling new publishing partners.

I am grateful to IDW that they are understanding of my "open marriage," but they know with Yoe Books/IDW that they have a very, very special place in my heart-felt affections.

Speaking of affections, what Yoe publication tugs at your comic loving heart strings every day?

The recently released IDW/Yoe Books Comics About Cartoonists: Stories of The World's Oddest Profession will always be my favorite book. The meta-aspect of the tales and the who's who of cartoonists represented in the book are a pulse-pounding thrill to me. I'm happy with the design I did on it, too, so it all came together on that one!

And the critics and fans seem to agree with Yoe on that one. Web search after Web search, the book has only garnered positive and often amazed reviews. The book features comic legends such as Jack Kirby, Steve Ditko, Siegel and Shuster, Will Eisner, Elzie Segar, and Harvey Kurtzman.

Do you better prefer being a comics historian or comic book writer historian?

Like Dorthy Parker said, "I hate writing, I love having written". I enjoy doing the research and the design part of the book making much more than the writing aspect. Writing is so damn excruciating painful! I'm suffering terribly right now as I type this! Oooohhh!

There are many different Yoes. There is editor Yoe, writer Yoe, historian Yoe, 63-year-old-father-of-six::long gasp::youngest-only-born-a-few-weeks-ago (I love this man’s lust for life), and of course, there is creepy, white-boy ghoul Yoe: Forelock.

Tell us about Forelock the Warlock. Where did he originate? What's his story?

Our line of books, The Chilling Archives of Horror Comics, that reprints 1950s comics has been some of our most popular offerings. IDW head-honcho Ted Adams suggested we start a regular old-skool comic book, reprinting those kind of comics to supplement the hardbound books. Comics from the 50s often had horror hosts as TV stations showing old monster movies in the 60s did. Characters like The Old Crypt Keeper from EC comics, and Ghoulardi, a Cleveland TV personality. [These] inspired me to fashion myself as a ghoul for the comic book. One of my favorite artists, Angelo Torres, did an amazing job making me into a monster. It's for laughs—too many people don't seem to have fun with their comic research, writing, design and publishing. They take themselves too serious in a not good way. I think being playful in creating these books is essential, considering the entertaining medium we're studying and propagating.

Speaking of The Chilling Archives of Horror Comics, what's your fascination for vintage contraband comics?

I've always been a rebel, and appreciate how the horror comics of the 50s and the underground comics of the 60s greatly upset the establishment types. Maybe that's why I'm not intrigued by much contemporary stuff—none of it is pissing off the squares!

IDW and Yoe are up to no good, as usual, and they are stirring up some mischief with comic wonder, Steve Ditko, and his amazing, naughty, no good MONSTERS! I cannot be more excited for this series of books. The first one, releasing March 19, a short month away, features Ditko and GORGO (fans face) and volume two features my favorite, Ditko’s Konga.

Tell us a bit about Ditko Monsters.

These towering monsters have never stomped back in any big way—till now.

Steve Ditko, whose work does inspire me deeply, was the co-creator of Spider-Man and Dr. Strange. In the same period of delineating those characters, Ditko was drawing fun comic books of adventures of B-movie monsters Gorgo and Konga for  B-comic publisher Charlton. Ditko's Marvel work has been reprinted a zillion times. These towering monsters have never stomped back in any big way—till now. We're publishing ginormous full-color monstrous compilations of both the Gorgo and Konga Ditko masterpieces—we, and thankfully the fans, are very stoked!

Where do you think comics are headed (…regarding the fact that we can now read them digitally)?

The only good comics are by a dead cartoonists printed on dead trees.

What would you say are your top three goals?

This colorful, insightful, and talented indie publisher, Yoe and his “immensely talented producer Clizia Gussoni”, has published everything from the Little Penis Finger Puppet Book to 60-year-old horror comics, to insightful and comprehensive documentation into the lives of the comics we adore, to celebrations of the classics like Popeye, Felix the Cat, Bettie & Veronica, and Archie.

Watch for the release of Ditko Monsters: Gorgo in a few short weeks (March 19). And keep your eye on Yoe and his delightfully nutty hair.