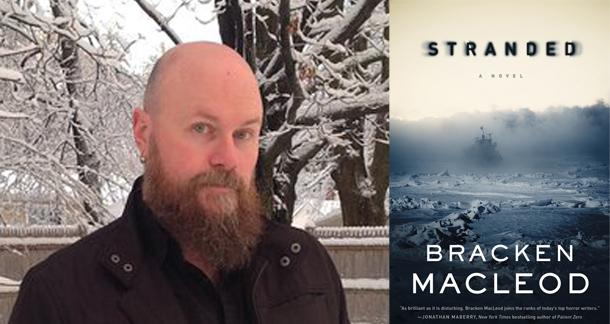 In the course of this interview, Bracken MacLeod refers to his new novel, Stranded, as "John Carpenter’s The Thing meets Jacob’s Ladder.” I don't know that I can describe it much better than that. But I'll try!

Stranded is about a shipping vessel that gets jammed up by ice in the Arctic. And then all the ship's systems fail. And then everyone starts getting sick. And then it looks like the only hope is a journey across the ice toward an oil drilling platform that may or may not be there. Then things get weird.

The book is claustrophobic and creepy and absorbing, with a left-field twist I didn't see coming. In less sure hands, it would have fizzled. But MacLeod sells it, and finds a very human angle to what is otherwise a very effective Twilight Zone-style story.

It's also new territory for MacLeod, who is primarily a crime fiction guy. The two of us are teaming up for a joint signing at The Mysterious Bookshops in Manhattan on Oct. 12 (my new book is coming on the 11th), so before we get together for that, I wanted to hit him with a couple of questions about Stranded...

Tell us a little about how this book came together, because it doesn't fit the "write-query-pray" model so many of us are used to.

This one was born a little differently than most. Brendan Deneen at Macmillan was looking for someone to write an icebound thriller he had a concept for, and asked another author, Christopher Golden, if he knew anyone he thought could do the job. Chris, instead of saying, “Yeah, Tim Lebbon!” pointed him in my direction. After that Brendan called to ask for a copy of Mountain Home to see if I could write coherently. The funny part of the story is that I was on vacation with my wife and son in a remote house off the grid in Maine when he called. We had no landline, no cell signal, no internet, and only generator electricity at night (not unlike the setting for Mountain Home, in fact).

I told Brendan I could deliver the finished eighty to ninety-thousand-word manuscript in six months. Typically, that wouldn’t be a problem for me either, but that year we got nine cumulative feet of snow in a span of only five weeks.

I only knew about the call because we had to run into town that afternoon to grab something we’d forgotten to bring along and I got his voicemail. I spent the rest of the day in a café trying to download a [Kindle file] of my book to my phone so I could forward it on to him. It shouldn’t have been as hard as it was, but I eventually got it done after a lot of swearing and coffee. He read Mountain Home and offered me the gig not long after.

How were the process and pressure different, given the nature of the assignment?

The first way it was different was that the concept was collaborative. Brendan and Alexander Paul Ilic had worked out a very cool idea together to start. Then I came on board, revised and added to the outline, taking the story to the places I thought it needed to go (or at least the places it needed to go if I was going to write it). Once that was done, I sat down to work. I usually write from a long synopsis, so that wasn’t any different from how I normally do things. I usually write a long outline and then the book, and it’s a pretty rare occurrence that my story changes in any significant way after that. I like to do all my plot thinking ahead of time so I can focus on character and emotion.

But the pressure to deliver by a certain date was new and stressful. I told Brendan I could deliver the finished eighty to ninety-thousand-word manuscript in six months. Typically, that wouldn’t be a problem for me either, but that year we got nine cumulative feet of snow in a span of only five weeks. I lost about a month’s worth of work because of snow days that kept my son home from school. He’s five, so if he’s home, my job is to be a dad, not a writer. I wanted to deliver my first book for a legacy publisher on time, so you can imagine I was a little stressed. I ended up flying my mother-in-law out from the west coast so she could watch the boy during spring break while I finished up. I completed the book on time, and even got a tiny taste of what the characters would be facing in the Arctic as a result of digging out of that winter.

How much research did you have to do, and did you have anyone read it over for accuracy? Do you have a secret history working on freighters? There's an incredible sense of realism and place here. Had I read it blind I would have assumed it was written by a longshoreman.

I can’t swim, I’m terrified of water, and I hate going on boats. I approached this story like Ernie Hudson’s character in Ghostbusters: if someone asks you if you can write a book about sailors stranded in the Arctic, you say “YES!” But I didn’t know a damn thing about sea transport or maritime industry when I started. I tend to stress out about that stuff too. I know the audience of Platform Supply Vessel sailors is probably pretty small, and if I get some small detail wrong, I’m not alienating a lot of people. But I’d rather not get it wrong at all, if I can help it, so I did a lot of research. The trouble is, while there’s ample material written about North Sea fishing, the oil industry tends to be less open about how it does its business. So I had to dig to find good research sources.

After that, I sent the first half of the book to my uncle who spent his career serving in the Navy. He retired as the Commander of the Philadelphia Naval Shipyards and along with my aunt, (who was also in the Navy) knew a thing or two about ships and being out to sea. They did a read-through of the first act and gave me guidance about the things I got right and wrong about daily shipboard life. For the most part I did all right, but they steered me in the right direction about the difference between walls and bulkheads, ceilings and overheads, and that sort of thing. I maintain, anything I depicted accurately in the book is due to their help, and anything I didn’t is my fault alone.

I know you primarily as a crime guy, but this is horror through and through. Did working on this book make you want to work more in the horror realm?

I started out with a desire to be a straight up crime author like my literary heroes Andrew Vachss and James M. Cain. I intended to do purely real-world inspired work, and thought my background in law could inform my fiction, and about half of my work has worked out exactly like that. At the same time, I love horror and have been reading it all my life. I also tend to run more in spec fic circles. So at least half the time I’d see an anthology call or be asked to submit something to a magazine, it was horror. As it turns out, I love writing it as much as crime, and I seem to be pretty okay at doing both. Given how difficult the last crime novel I wrote was, I think horror might actually come more naturally to me. The first draft of Stranded was more or less what ended up going to press, but I’m still fighting with this crime book after two years off and on.

I want to ask you about the twist, but don't want to give it away, because it blindsided me, in the best way possible, and I don't want to ruin that for anyone. So I'll ask it like this: Did you get any pushback or feedback on that, or was it just sort of "Oh that sounds cool run with it."

The twist was conceived and very carefully planned from the outset. It was kind of the driving factor in doing the book. The way I pitched my take on the story was “John Carpenter’s The Thing meets Jacob’s Ladder.” I love paranoid sci-fi thrillers and wanted to put that kind of existential uncertainty into a novel, so we never had any doubt that the direction the book was going was thataway.

I saw it got optioned for TV. Do you have any involvement with that?

Nah, the good folks at Warner Bros. Television are making sure people who actually know what they’re doing are involved with the development of the show. By the way, it’s moved from optioned to “in active development” now, so that’s exciting. But you know how these things work. I’m not counting my eggs until there’s a roasted chicken on my plate.

On a scale of 1 to a million, how excited are you for our joint event at Mysterious?

So excited that a spoonful of my enthusiasm weighs a ton like some kind of deep space dark matter star-stuff. The mere idea of our event trembles with the magnificence of the infinite.

Fascinating. To be asked to write something in this way....Love the discussion of process. Thanks for not blowing the twist. I  want to read this. Thanks.