A Conversation with Ania Ahlborn About Creepy Houses, Strange Old Ladies, and Her New Novel 'The Devil Crept In' 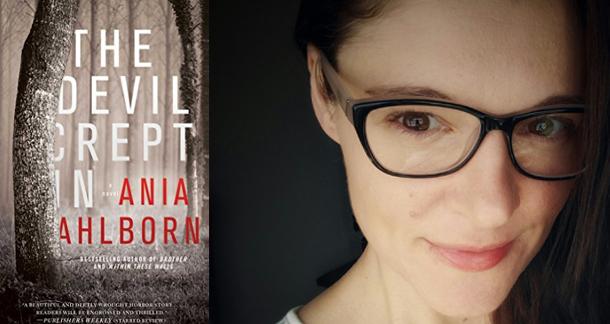 The Devil Crept In, the latest novel from Ania Ahlborn, is an immensely engaging and creepy read—the kind of book that demands your attention even as you're hesitant to read it before bed, for fear of the nightmares it might inspire. It really digs down into those fears that loom so large in a childhood: the creepy house, the strange old neighbor, the figures moving in the woods.

Young Jude Brighton has been missing for three days, and while the search for him is in full swing in the small town of Deer Valley, Oregon, the locals are starting to lose hope. They’re well aware that the first forty-eight hours are critical and after that, the odds usually point to a worst-case scenario. And despite Stevie Clark’s youth, he knows that, too; he’s seen the cop shows. He knows what each ticking moment may mean for Jude, his cousin and best friend.

That, and there was that boy, Max Larsen... the one from years ago, found dead after also disappearing under mysterious circumstances. And then there were the animals: pets gone missing out of yards. For years, the residents of Deer Valley have murmured about these unsolved crimes… and that a killer may still be lurking around their quiet town. Now, fear is reborn—and for Stevie, who is determined to find out what really happened to Jude, the awful truth may be too horrifying to imagine.

Ania—besides being an accomplished novelist—is one of the instructors here at LitReactor, teaching both Bestseller Bootcamp, and Making a Monster, which is currently enrolling. We talked a bit about the new book, and teamed up to give away three signed copies...

I think for every kid, there's a creepy house or building that becomes a subject of fascination. Was that the nexus point for this story, or was it something else?

The creepy house in the book was born of the characters that are living in it throughout the story, and the tragic past history of its owner. It starts out as a sunny dream home, and slowly begins to deteriorate as it's owner tumbles headlong into a vicious sort of tragedy. The house is, I suppose, more of a character itself than a point of inspiration. Though, as a kid, there was a creepy old house that used to intrigue the heck out of me. My mom would take me down to this creek in the little town we lived in, and in that particular area, there was this dilapidated house completely overgrown with ivy. My mom called it "the witch's house," which only made it that much more spooky (and irresistible). It's still there. And I'm pretty sure someone lives in it, which is just... yikes.

You mention, too, in the acknowledgements, meeting a strange old lady on walks with your dog. Also a source of inspiration?

No, but now that you mention it... that's funny. I didn't even put that together until now. Weird!

This got me thinking a little of The Girl Next Door by Jack Ketchum—in how bad things build up and get out of hand because of the way kids feel unable to communicate with adults. Obviously for Stevie it's more of a problem, but still, there's this wall between the kids and the grown-up characters. Was that something you were leaning into while writing this?

The very obvious disconnect between a kid reality and an adult reality was definitely an inspiration. I've always found the phenomenon of adults disregarding children's fears as nothing but "kid stuff" pretty fascinating. Like, your kid comes up to you and says "Dad, there's a monster in my closet." Gut reaction is, yeah right. Either the kid had an overactive imagination, or he's avoiding going to bed. Except, what if it's really there? I love flipping our adult, grown-up reality on its head, and Devil takes that to the extreme.

The tension of the first section was pretty incredible—it creeped me right out even though the overtly scary stuff doesn't happen until the middle and end of the book. How do you build and maintain tension when you're writing?

I think it's a careful balance between character development and revealing the plot bit by unnerving bit. Maintaining tension is tough, but it's possible if the reader is invested enough in the story, and readers become invested when they care about the characters. Really, that's why I focus so intently on the characters themselves rather than putting too much pressure on the plot.

How do you get into the headspace of a 10-year-old boy?

For some reason, I find it pretty easy to crawl back into my younger brain—quite a few of my novels feature little kids. I was an only child until I was nine, and I spent a lot of time alone. For some reason, I remember being that young pretty vividly, from the places I visited to the way I thought and felt about things at the time. That, and I generally find child characters fascinating in their innocence. Kids are fantastic, especially if a book tips heavy on the emotional scale. They're allowed to say and do ridiculous things that give the reader a break from all that tension you mentioned earlier, without completely throwing the reader out of the story itself.

I'm working on a story with horror elements right now and I'm trying to explore the things that scare me—in part because I think this might help me scare the reader, but also, maybe I can exorcise some of this stuff. Do any of those feelings play into your writing process? Is there a personal stamp on this?

Anyone who has read all of my books thus far probably knows me better than I know myself. I can't get away from personalizing my work, be it specific details that are pulled directly from my life to, as you say, exorcising certain fears by way of writing them down. I don't have any kids quite yet, so the part of the story that involves Rosie, a mother, and Otto, her son, were particularly telling of my own fears. That whole question of, what if a child can be born bad, you know? And then there's Stevie himself, who has a whole suitcase full of issues. I suppose, when it comes to Devil, I'm touching on the concept of parents not having control over the destiny of their kids, and these days, that's pretty poignant.

This is a story without a lot of clear answers—we never find out exactly who Ras is, the exact details of what happened between the final chapter and the epilogue—do you work that information out? As in, do you have answers to your own mysteries? Or do you not need them?

For the most part, I do. But there are some riddles I leave unanswered even for myself. I'm not a fan of horror that answers all its own questions. For me, that strips the story of its terror. I absolutely love it when a book (or movie) leaves you feeling haunted. Every single one of my books is open-ended to some extent, and that's by design. I like leaving the story in a place where it'll fester under your skin, and maybe have you looking over your shoulder down the line. That, to me, is what great horror should achieve.

This is less a question and more an observation—I love the cover. Do you get any input on that?

I do! Of course, working with a big publisher like Simon & Schuster affords you less input than you'd have if you were self-publishing, but my team, and my editor in particular, are fantastic when it comes to striving to make the covers beyond amazing. We've had a couple of, uh, let's call them tense moments...but in the end it always comes out looking fantastic. The magic of collaboration, you know? This cover is probably one of my favorites to date.

What attracted you to horror, and do you ever think about writing in other genres?

I always say that I didn't choose horror, horror chose me. I genuinely can't remember a time when I wasn't into weird and spooky stuff; horror just feels like home. That said, it could be argued that a couple of my books aren't horror at all. Brother, which Gallery released last year, has it's feet firmly planted between horror and psychological thriller. My second novel, The Neighbors, which was published back in 2012, is harder to pigeon-hole. People read it and consistently bring up David Lynch. It's got a bit of a Blue Velvet vibe. And finally, my current work-in-progress is far more dark thriller than horror, so I'm consistently straddling those two genres. To me, there's really not that much of a difference between those two genres, quite honestly. Dark is dark, and I'll write anything as long as my id is allowed to run free.

We've got three signed copies of The Devil Crept In. Want one? Sound off in the comments. We'll pick three winners at random. US residents only.

Just finished part 2 of the book on kindle. Wow! If a copy is still available I'd love one.